Itâ€™s often said that the key to excellent character design is to create characters that can be recognised by their silhouettes alone. Indie hit Thomas Was Alone springs to mind when thinking about games that successfully defy this convention, putting a bunch of mere blocks under our control. It even went on to spawn an action figure line, albeit one that was clearly tongue in cheek.

Binaries is another that shuns convention, putting us in control of two coloured balls. Are you #TeamBlue or #TeamOrange, the game questions. It doesnâ€™t matter, of course, and the developers know this. Binaries doesnâ€™t take itself seriously at all, with pop culture and internet meme references popping up frequently. In light of actual bonafide character design, these random musings help induce a spot of personality. The jaunty chiptune soundtrack helps here, too. 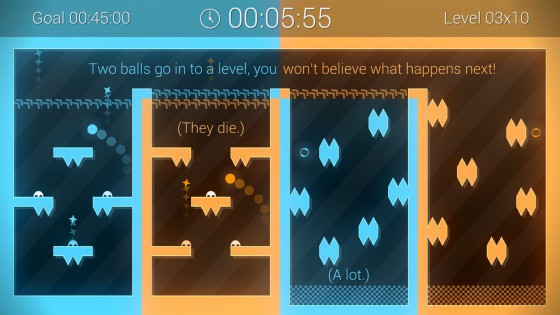 Binaries can be likened to Thomas Was Alone, Super Meat Boy and Taitoâ€™s arcade semi-classic Cameltry. Only loosely, however, as although these comparisons are valid it feels like something wholly original. Both balls are controlled at once; hit jump and they leap through the air simultaneously. The idea is to simply reach their respective colour-coded goals while avoiding spikes and projectiles, with the twist being that the balls can withstand hazards of the alternative colour.

Like all good puzzlers things start off simple, with no spikes or other nasties. Most of the early puzzles see the screen split in two, with each ball faced with obstacles in different locations. Always look before you leap – twice over – to keep the death toll at the minimum. Not that thereâ€™s a penalty of any kind â€“ restarts are instant, and lives are infinite.

Slowly but surely â€“ and ever so elegantly â€“ the difficulty level rises, with some stages placing a ball in a small maze in the centre of the screen. Or in one instance, a small box with spikes. The focus on this stage is to guide one ball around a screen sized maze, all the while keeping the other ball away from the spikes by changing direction in mid-air while jumping.

Using one ball to protect the other from projectiles is another idea that pops up often around the halfway mark, and by this point, you should be well versed with both the logic within the puzzles and the developerâ€™s sense of humour.

Itâ€™s a testament to the puzzle design that those that appear simple on first glance actually arenâ€™t, while the ones that appear melon-twistingly tough are often the opposite. Another reoccurring theme centres around lodging a ball in a safe place so the other can navigate a maze safely; a theme that never gets old due to each stage feeling suitably different from the last. Incidentally, a handful of stages are accessible at once, so if you get stuck you can always try another and come back after honing your skills. 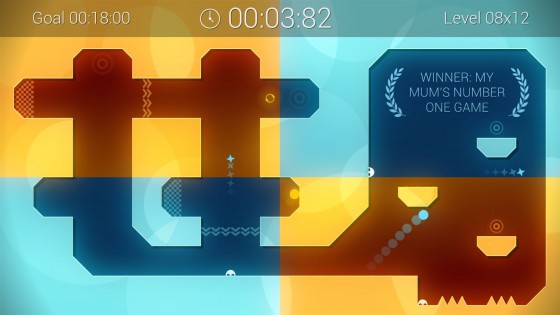 In addition to a 100% completion rate, each stage also has a set time to beat. In fact, the whole game has a par time of 38 minsâ€“ a figure requiring lots of practice to get even remotely close to.

Itâ€™s a shame that there isnâ€™t a trial version of Binaries available, as no doubt some will shun it due to the rudimentary visuals alone. Those foolish to do so will be missing out on one of the most innovative games of recent times.

Tough but fair, Binaries is a game that should come with an air punch guarantee – the developers have clearly spent a great amount of time tinkering and fine-tuning puzzles to perfection, all to ensure that itâ€™ll have you punching the air with glee after overcoming its trickier moments. Sure, you may want to punch the nearest wall at times, but itâ€™s the significant challenge the game possesses that makes those victories all the sweeter.