Those who can recall the early days of the PlayStation 2 may remember Silpheed: The Lost Planet, a slow and unoriginal shooter that didnâ€™t have much going for it aside occasionally flashy visuals.

Out of all the arcade-style shoot â€˜em ups weâ€™ve played over the years, this deep space shooter from Headup Games reminds us of Silpheed the most, right down to the fact that it too is likely to find few fans.

Solar Shifter EX is of the bullet hell variety – offering a story-driven single-player campaign only – and depending on how you look at it, itâ€™s either an incredibly bareboned or a resoundingly pure experience.

Although there are infinite continues and the checkpoints are reasonably well placed, one life is all you get, and there are no â€˜smart bombsâ€™ to rely on when things get hectic. Thereâ€™s no scoring system in place either, which in turn results in the absence of online leaderboards â€“ a modern day shootâ€™em up staple. You wonâ€™t be chasing high scores here. 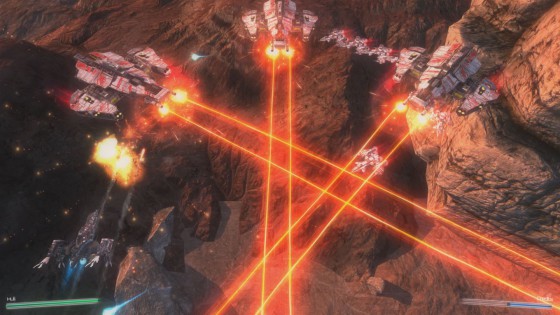 It does take at least one cue from Japanese shmups, as thereâ€™s a gimmick â€“ the ability to shift (read: warp) across the screen via a flick of the right analogue stick. During the first few stages â€“ which experiment with an irksome rotating camera â€“ itâ€™s crucial to warp out of harmâ€™s way. Around halfway through this gimmick then takes a backseat â€“ as does the floaty camera, thankfully – with enemies that attack in Galaxian-esque swirling patterns making frequent appearances instead.

Like arcade shooters of yore, enemies donâ€™t react to your whereabouts or actions. They merely follow pre-set paths, some of which are lazily repeated. As such, most of the experience boils down to finding the â€˜safe zoneâ€™ during each wave. This results in cheap deaths and countless instances of trial and error, as you try and find the perfect place to â€˜park upâ€™ and remain safe from incoming fire.

Despite the presence of a health gauge, it can be tricky to tell when youâ€™re taking damage. This is especially the case during later stages when the screen is frequently filled with explosions, smoke trails and neon-hued lasers. Had the developers thought to include vibration feedback, this problem could have been easily fixed. Out of all the gameâ€™s omissions, itâ€™s by far the most bothersome. 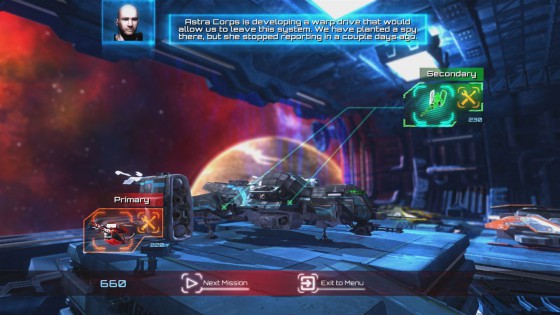 As the game progresses, staying put in safe zones is more crucial to staying alive than warping from opposite sides of the screen. As tempting as it is to whizz all over the place picking up the credit tokens dropped by foes, doing so is a sure-fire way to get killed.

These credits are used to upgrade primary and secondary weapons when back at the hanger. The chance to upgrade weaponry doesnâ€™t occur at the end of every stage, however. Itâ€™s also a little odd that not every stage ends with a boss battle â€“ more than a few just come to an abrupt end, which only adds to the overly amateurish feel.

Solar Shifter EX is a hard game to like, let alone love. Itâ€™s a bullet hell shooter thatâ€™s fundamentally flawed, and although it can feel quite satisfying to finally reach a checkpoint after numerous attempts of trial and error, it was only because it meant we were one step closer to reaching the end of the blessed thing.