When the ending credits to Blue Estate rolled, unlocking the final level for play in arcade mode in the process, the thought of playing through each stage again didnâ€™t exactly fill me with joy.

While not a bad game, this on-rails shooter suffers from the same faults as Rambo, House of the Dead: Overkill, Blackwater and others designed exclusively for consoles â€“ the levels are drawn out for far too long, and bosses absorb bullets as if they were mere spit wads. Itâ€™s easy to understand why the developers took this approach â€“ being a console game and all, most gamers would expect a 3-hour run-time at the very minimum â€“ but it still doesnâ€™t make for the most engaging of experiences. 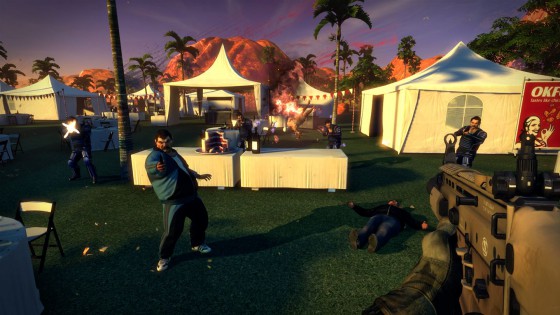 At least the environments had some thought put into them, with each location more diverse than most. Thereâ€™s a sewer system thatâ€™s not only a gang hideout but some kind of holy shrine, a fried chicken factory thatâ€™s a front of an illegal fighting syndicate, and a luxury golf course thatâ€™s being prepared for a lavish party. Each stage bestows a new weapon or two, while a combo system keeps the whole thing together, complete with an elusive 5-star rating to aim for.

In arcade mode this combo and scoring system really comes into its own. As I should have anticipated, levels in this mode are far shorter. The pace is faster as well, giving each stage a neat bite-sized feel. By which, I mean itâ€™s possible to play all six stages in arcade mode in around twenty minutes. It certainly lives up to its name.

Missing a single enemy here deals a significant blow, as not only does each kill add a couple of precious seconds onto the clock but thereâ€™s a huge score bonus â€“ and an achievement to gain â€“ for killing every enemy within a stage. This prompts players to memorise enemy locations; the more times you play through a stage, the closer to achieving the target â€˜S Rankâ€™ youâ€™ll doubtlessly get. In turn, arcade mode proves to be far more rewarding and satisfying than story mode. 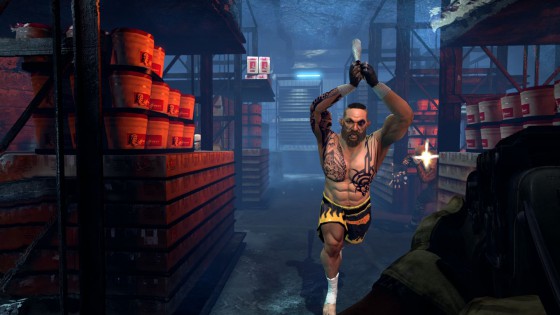 The mechanics are slightly different here, too. Headshots now fill up a slow-mo meter, and activating this just at the right time contributes heavily to gaining top rank. Like the main campaignâ€™s ranking system, itâ€™s still vital to pop a few crouch shots. Indeed, Blue Estate has a pretty warped sense of humour. It doesnâ€™t always pay off â€“ the pop culture references, in particular, feel a little phoned in â€“ but the fact that the developers tried to cram in as many jokes as possible is at least appreciated around these parts.

I came to Blue Estate for the story but ended up staying for the bonus arcade mode. It offers less but provides more. Now thereâ€™s a thing.