Inventory management is one of the most laborious elements to a typical role-playing game. Not enough to ruin an experience outright, but certainly a hindrance â€“ almost everybody rolls their eyes when seeing â€˜you are over-encumberedâ€™ on screen. Hello Gamesâ€™ No Manâ€™s Sky does something quite unbelievable. It takes this often frowned upon feature and centres a whole game upon it.

While embarking on a journey to the centre of the galaxy, an untold amount of time will be spent decluttering the two inventories; one for your exosuit, and another for your retro chic sci-fi starship. Although it possible to stack certain items, space is still ridiculously limited and as such youâ€™re actively encouraged to find exosuit upgrades and bigger and better craft. This is how the game is structured, or its backbone if you will. Land on a planet, scan for landmarks, find upgrade blueprints and the resources to craft them, with each upgrade and resource taking up valuable inventory space.

Itâ€™s an experience based around self-improvement, pretty much, which ties in with the side narrative entailing material possessions and their actual worth. 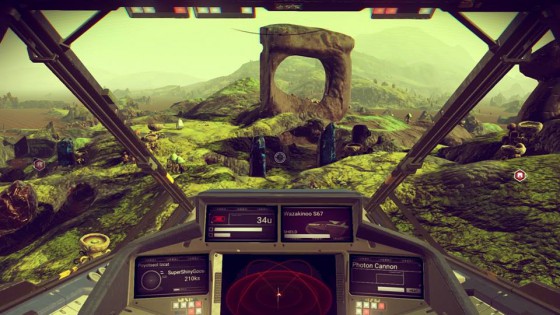 This journey begins with a crashed spacecraft which youâ€™re tasked with repairing in order to take to the stars. Menus are cumbersome to navigate at first, but soon come second nature, allowing new items and upgrades to be crafted on the fly. Another screen keeps track of discovery progress on a planet, and itâ€™s here that both planets and creatures can be renamed and uploaded in return for a few extra credits.

Although youâ€™re free to explore at your own pace, pointers are provided for planning the journey ahead. Itâ€™s likely several hours will be sunk into NMS before even getting around to forging a hyperdrive and the warp cells required for long distance travel. Crafting these cells requires an abundance of rare metals to be mined; a time-consuming task thatâ€™ll be more than familiar by this point considering the requisite to keep the spacecraftâ€™s fuel tanks topped up and the exosuit charged.

Indeed, No Manâ€™s Sky is less about discovery and exploration than we hoped, putting a focus on survival and resource management (ergo inventory management) instead. Constantly having to find plutonium for the launch thrusters, in particular, proved to be a huge headache, to the point where it discouraged random pit stops to take in the scenery. 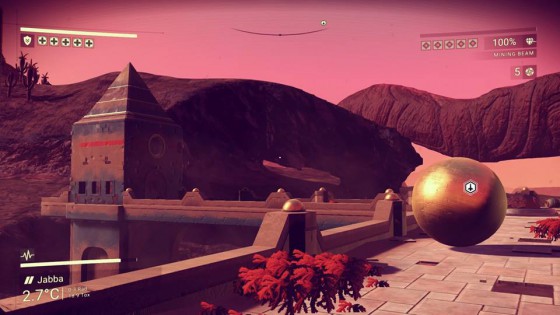 Even those who have only been keeping one eye on No Manâ€™s Sky will know that all planets â€“ the whole galaxy itself, in fact â€“ is procedurally generated. This proves to be something less exciting than it may initially sound due to the algorithms soon becoming predictable. No matter the biome (tropical, toxic, radioactive, etc) there will always be an alien structure or waypoint nearby, and with a vast amount of planets formed from rocky formations many end up looking identical. The same goes for stock building interiors, with aliens always sat at exactly the same place.

Just as a stopped clock tells the correct time twice a day, the random generator will occasionally produce a planet of sheer beauty. One thatâ€™ll resonate on a personal level, be it a wintery landscape or a world with deep blue seas and cotton candy skies. These are the locations youâ€™ll want to spend time in and explore, tracking down all lifeforms (each planet has randomly designed creatures, both hostile and docile) and visiting as many bases, facilities, ruins and trading stations as you can find.

Providing you can access the door, that is. The random generator sometimes lodges buildings into cliff faces or places them precariously on top of small peaks so that a jetpack is required to reach them. 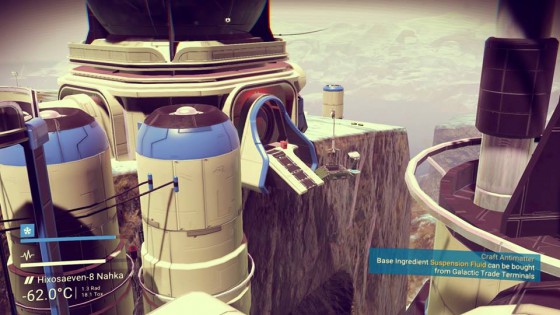 Itâ€™s within these locations that new blueprints and upgrades can be found, as well as access to the galactic exchange marketplace. Theyâ€™re often home to alien creatures too, many of which are willing to trade or teach a new word in their language. These confrontations are a highlight as the text is written, and questions posed, in a very similar manner to â€˜Choose Your Own Adventureâ€™ books. The art direction, too, is influenced by sci-fi illustrations from the â€˜70s and â€˜80s, and as such is hard to fault.

That said, the creature generator is nowhere as proficient as the starship generator, often filling worlds with creatures that resemble outcasts from EAâ€™s Spore. Visiting two planets in a row with very similar wildlife isnâ€™t uncommon. As mentioned previously, not all creatures are friendly â€“ only the docile can be fed and tamed. As tempting as it is to fight off hostile creatures, this kind of activity summons sentinels. This is one of two areas where combat comes into play, with the other being space battles against pirates. Halo this isnâ€™t, however, with combat functional at best. Nor is it flashy â€“ the package as a whole is rough around the edges visually, with pop-up and a limited draw distance being the biggest offenders. 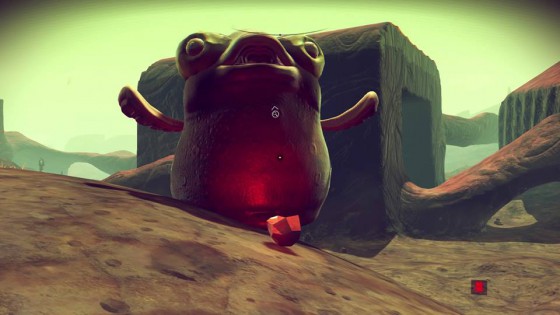 This general lack of polish serves as a constant reminder of the gameâ€™s humble roots â€“ a wildly ambitious project being developed by a small, if highly enthusiastic, team. Often it’s telling that Hello Gamesâ€™ bit off more than they could chew, with scope for improvement pretty much across the board. Like playing an RPG with randomised dungeons, the lack of a human touch is more than apparent. The (really) big difference is that here featureless rooms and corridors with dead ends are entire planets; planets that youâ€™ll be stuck on until finding enough resources to get to the next system in the galaxy chart.

The desire to carry on the journey, in the hope of something new to see and do, fades over time. Not only this, but the novelty of No Manâ€™s Sky being more curio than a bona fide game is certainly going to wane sooner for some than others. Thereâ€™s only so much rocky terrain one man can toil, and this is a game with plenty of it.

It may sound derogatory, but our favourite moments in No Manâ€™s Sky were the ones where something actually happened. Itâ€™s what we imagine a journey across Route 66 must be like â€“ a few pretty pit stops but mostly dull open road. After a while, even the mountains must all look the same.