As briefly mentioned during last weekâ€™s new release round-up, a free promotional Ben-Hur game – developed by Krome Studios – has appeared out of nowhere on the US Xbox One store. With the movieâ€™s UK release date down as 7th September, itâ€™s likely to appear on the UK store over the next fortnight or so.

Having played the US release, we suggest setting your excitement gauge to minimal. While a far cry from that atrocious Yaris game from years ago, it still has a throwaway feel to it. Not that we expected anything more, being a free promotional game and all. 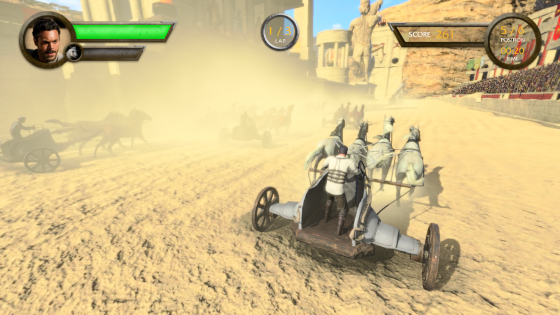 This brash and brutal chariot racer features a full season to play through, which would be impressive if it wasnâ€™t for one thing: a season lasts just three races, all of which take place on the same course. The first race is a simple affair, allowing ample time to get used to the controls – the triggers are used to whip left and right, while bashing the A button spurs the horses. The second race then adds an extra lap and throws a few more hazards on the track, while the third and final race is a four-lap affair that turns up the AI difficulty level from competent to savage.

The oppositionâ€™s AI is easily the standout feature – they put up good fight, often trying to shove your chariot into the sidings to cause a crash. One chance is all you get, and itâ€™s a case of 1st place or nothing. You can however win an event by wiping out all the opposition, which proves to be quite a challenge during the last two races. Only achievement hunters are forced to take this approach, mind. Speaking of achievements, itâ€™s more than generous with a handful unlocking after winning the first race.

Thereâ€™s an hoursâ€™ worth of entertainment here, give or take fifteen minutes or so either way. Not the most thrilling hour youâ€™ll ever spend on the sofa, granted, but like the saying goes: don’t look a gift horse in the mouth.