Skills gained by obsessively playing Tetris in the â€˜90s may come in handy when packing groceries into shopping bags, but theyâ€™ll only get you so far when playing the tetromino-featuring Tricky Towers. It requires just as much luck as skill, and itâ€™s because of this itâ€™s neither a puzzler nor a party game.

The set-up is similar to a puzzler, this much is true. Itâ€™s Tetris in reverse, pretty much, with the idea being to build a tower formed from tetrominoes. Constructing a solid foundation is easy enough, and this is where elite Tetris skills pay off. Towers are physics based, however, and so it only takes one incorrectly placed piece to mess everything up. Throw an assortment of magic spells (read: power-ups) and super-sized jumbo blocks into the mix, and you end up with something where all your handiwork can be scrubbed in seconds. It also doesnâ€™t help that the controls are rather finicky, requiring gentle taps to line up blocks perfectly. Weâ€™re talking mere millimetre precision here. 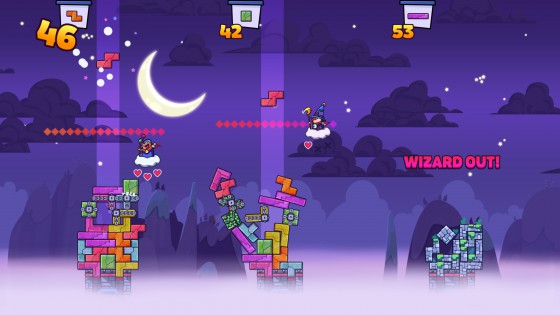 The randomised nature of spells and such makes online multi-player matches wildly unpredictable. While entertaining in essence, it also means that skilled players never really feel rewarded for their efforts. Sadly, this is also the case for the endless mode. It should be a pure and simple experience, but in practice it’s the complete opposite due to spells and larger blocks featuring here too. This mode grants three lives which are – theoretically – supposed to account for three blocks falling from the tower. More often than not though the whole blessed thing goes â€˜pear shapedâ€™ due to reasons beyond your control, resulting in all three lives being lost in one fell swoop.

The challenge mode is the other single-player mode on offer, and fares better. This entails an assortment of bite-sized puzzles, varying from hanging blocks on a side of a tower by wedging pieces into the brickwork to filling a small well with blocks with no gaps whatsoever. Other puzzles grant a more open approach, such as having to build a tower of a certain size within a tight time limit. Spells can still prevent success here, though – there’s no escaping them. 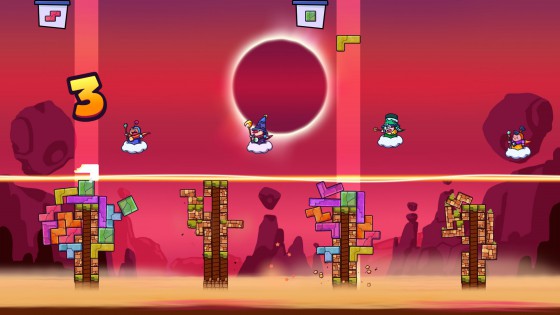 Spells come in both dark and light forms, and so often the decision is yours to either solidify your own tower with ivy and immovable blocks or ruin the work of others with ice blocks, fog and more. During a typical multiplayer match youâ€™ll be granted around two or three, and if used proficiently they can swing things in your favour.

Due to a surprisingly high amount of modes, persevering Tricky Towers as a party game is the recommended approach. Even then, expectations shouldnâ€™t be set high. Thereâ€™s chaos, then thereâ€™s controlled chaos – Tricky Towers walks that fine line precariously, often making you think that victories and failures alike were completely down to chance.