Surprise! GTA V has re-claimed the UKâ€™s chart top spot for the first time since March 2015, making it nine weeks in total for Take-2â€™s crime caper.

Chart-Track informs that it was a close call between GTA V and Uncharted 4: A Thiefâ€™s End, with sales just â€œa handfulâ€ apart. 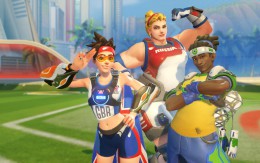 GTA Vâ€™s rise to the top spells the end of LEGO Star Wars: The Force Awakensâ€™ five-week run; it was just one week away from breaking the record held by LEGO Batman 2.

LEGO Star Wars: The Force Awakens is now at #3, with Uncharted 4: A Thiefâ€™s End holding onto #2.

The Olympic bandwagon riding Overwatch rose one place to #4 while FIFA 16 dropped to #5.

At #6 itâ€™s Rocket League which, incidentally, was also the best-selling game on PSN last month.

Tom Clancyâ€™s The Division and Rainbow 6 Siege meanwhile both enjoyed a sales boost, pushing them back into the top 20 at #11 and #16 respectively.

The only other top 40 occurrence of note was Disney Infinity 3.0 re-entering at #26. Retailers have begun clearing out their remaining stock, with starter packs dropping to around the Â£15 mark. Will the figures ever make it into Poundland, we wonder.