It so transpires that if a developer wishes to make a game based around the Olympics, they donâ€™t actually need the official license.

One clear benefit is that this allows developers to cast realism and all tight-fitting lycra sporting attire out the window, putting their own characters and creations in place, and in some instances new events too.

For those out there who canâ€™t bear too much reality, we present the alternative Olympics Gamesâ€¦games: 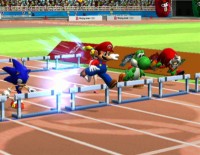 Considering this is the obvious alternative, weâ€™re only including the original M&S in this list.

When it was first announced it seemed quite an unusual decision to pit Mario and Sonic against one another in sporting events, considering Sonic is one of the speediest mascots around while Mario is on the portly side.

Sonic & Speedy Gonzales at the Olympic Games would have made a lot more sense, but probably wouldnâ€™t have sold anywhere near as many copies. While later games have lost their stride, the original will go down in the halls of gaming as being a multi-player classic, once famously immortalised in the BBC comedy Outnumbered. 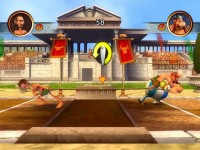 Developed by the French studio Etranges Libellules – best known 2008â€™s Spyro: Dawn of the Dragon – Asterix at the Olympic Games is a bit of an odd one. Not because itâ€™s a movie tie-in, but because the sporting events are merely mini-games, with the main story mode playing like a typical adventure. You have to hand it to the developers for not going full mini-game package on this one.

The Xbox 360 version, in particular, is very hard to find selling for as much as Â£30 on the likes of eBay and seldom seen in places such as CeX and GAME.

Hunchback at the Olympics – Arcade, Commodore 64

Talk about an unlikely hero. In a game that presents us with one of the ugliest loading screens of the â€˜80s, Quasimodo sets out to impresses Esmeralda by partaking in the 1984 Olympic Games.

This is the same Quasimodo that appears in Hunchback: The Adventure and Hunchback II: Quasimodo’s Revenge, you understand. Heâ€™s something of a lost gaming mascot; one that was obviously shoehorned into this sports package to turn a quick buck.

Despite featuring a character dating back to 1831, the sporting events were your usual modern day assortment – there were no fantasy elements here, resulting in something of a missed opportunity.

A game that fewer people have heard of and even fewer have played, The Mr. Men Olympics wasnâ€™t an officially licensed title but rather a bedroom coded PD game.

A surprisingly well-thought out package, it saw Mr. Dash take on the 100 metres, Mr. Strong show off his strength weight lifting, Mr. Dizzy getting dizzy with the hammer toss and Mr. Nosey pole vaultingâ€¦ with his nose.

The javelin event meanwhile saw Mr. Tickle throwing Mr. Skinny. â€œHelp, Iâ€™m stuckâ€ he would yell after being planted into the ground. 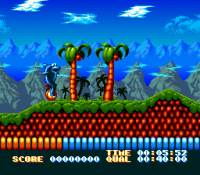 Released between James Pond 2: Robocod and the often forgotten James Pond: Operation Sta5ish, this was something of a stop-gap product. It wasnâ€™t bad, though, which is partly due to a rather predominant silly streak. Fish jokes ahoy!

The SNES version was known as James Pondâ€™s Crazy Sports; a name thatâ€™s somewhat easier on the tongue.

You canâ€™t say this one scrimped on content, containing fifteen events and eight different aliens to choose from.

Each alien had their own abilities: the caterpillar-like alien was great at racing events but useless at others while the flower-like alien was able to root itself into the ground for the javelin toss.

Predictably, events had equally daft names â€“ pole vaulting was known as Lizard Leaping while shot put was known as the Flob Flop. Despite being pleasingly daft, review scores werenâ€™t too impressive.

While not strictly based on Olympics, this button basher from Namco did have few events in common such as sprinting and the javelin toss. The super-human characters ran so fast that they would leave trails of flames behind, with a dragster car used to set the pace.

Another event saw the competitors throwing missiles instead of javelins. Failure to throw a missile through the air resulted in the competitor left standing in their boxer shorts with their other clothes blown clean off. Sadly, it never received a home conversion. 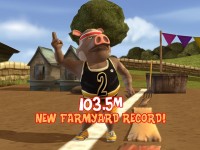 Now hereâ€™s an instance where the gameâ€™s title is better than the game itself. But then what did you expect from the team behind Ninjabread Man?

Curiously, despite being developed in the UK it would appear that the European version was cancelled, and it was only released in the US under the reworked name of Party Pigs: Farmyard Games.

Weâ€™re assuming this is the case anyway as there are no PAL copies on either Amazon or eBay. Which is probably a good thing, all told. 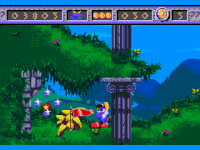 It was a pretty typical platformer from US Gold but there was one nice idea â€“ Izzy could transform into different things, including a hang-glider, baseball player and space rocket.

The moon landing event in the Olympics has always been our favourite.