Some role-playing games are surprisingly fast-paced, allowing you to tick a few sub-quests off the list and level up once or twice within the space of an hour. Typically, these RPGs are both pleasurable and satisfying to play with examples including Diablo III, Arcania: Gothic 4 and the ever-popular Fallout 4.

Then there are RPGs were an hour of play will barely scratch the surface. You may move the XP meter along a few millimetres, make a little headway on a quest or find some re-sellable loot in a chest or similar, but thatâ€™s about all you can expect. While not necessarily flawed, these RPGs can only be described as slow burners. Or to give one a name: Sword Coast Legends.

Thatâ€™s unless you partake in the bite-sized Dungeon Master mode, a clear highlight in whatâ€™s an otherwise mundane – but not unlikeable – Dungeons & Dragons role-player. Now defunct studio n-Space went beyond the call of duty by including this mode, especially considering the gameâ€™s Â£15.99 asking price. It feels like a premium DLC add-on, or if a push came to a shove, something from a triple-A release. 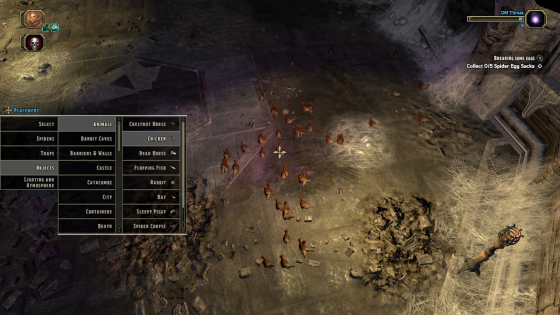 Weâ€™d even go as far as saying that it achieves more than the main game, focusing on the 4 vs. 1 multiplayer stance from the regrettably cancelled Fable Legends. It’s a concept easy to grasp: one player has full control of a dungeon, from trap and enemy placement to quest type and criteria, and itâ€™s down to other players to make it out alive.

Aside the ability to turn hostiles into allies, Dungeon Masters canâ€™t help players in any other way. Parties of four shouldnâ€™t struggle too much with whatever you throw at them, but itâ€™s easy to tell when smaller parties of one or two are having a hard time. As the man (or woman) in charge, cutting them some slack is entirely your call.

An adventurerâ€™s camp acts as an online lobby, and itâ€™s here – via a notice board – that the Dungeon Master can pre-select the size and theme of the dungeon, pick enemy types and toughness and even choose the rewards dished out at the end of a quest.

Dungeons are then created automatically, so you donâ€™t have to worry about placing start points, exits and whatnot. Small dungeons generally take around 15 minutes to jaunt through, while multi-floored affairs take considerably longer. 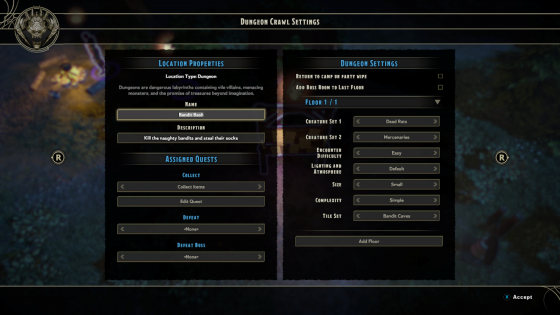 While there are only three quest types – kill enemies, collect items, or defeat a boss – it is at least possible to add your own mission descriptions and quest names; an idea that provides plenty of scope for mirth and merriment. Our quest to â€˜Kill the naughty bandits and steal their socksâ€™ prompted a chuckle from one other player, anyway.

Dungeon Masters are granted the rather nifty ability to possess both enemies and NPCs, thus allowing them to approach players directly and feel more involved. As well as placing enemies and traps, itâ€™s also possible to decorate dungeons as you see fit, adding torches, animals and such. We once filled a room with chickens, simply because we could. Sadly thereâ€™s no way to decorate a dungeon before players arrive – itâ€™s something that has to be done on the fly. Thereâ€™s no way to save dungeons either, although thatâ€™s not a huge blow. With only a handful of options, itâ€™s easy to set-up well-received dungeon crawls again for anybody else up for the challenge.

While Sword Coast Legendsâ€™ Dungeon Master mode doesnâ€™t offer infinite possibilities, it does prove to be incredibly enjoyable while the novelty value lasts, whether youâ€™re filling the boots of the Dungeon Master or being one of his figurative rats in a maze. Those lamenting the loss of Fable Legends will find solace here, if only temporarily.