Thereâ€™s some beyond the grave stuff going on with this Dungeons & Dragons RPG – developer N-Space, best known for Geist on GameCube, closed their doors back in March. Publisher Digital Extremes has carried the baton for Sword Coast Legends since, handling all future DLC and this console conversion.

Itâ€™s easy to see why they wanted Sword Coast Legends in their portfolio – itâ€™s a robust and comprehensive 40+ hour role-player, with the Dungeons & Dragons license lending it rich lore. For those curious, the Sword Coast lies between Icewind Dale and Baldurâ€™s Gate – two locations thatâ€™ll no doubt ring a bell with older gamers out there. Weâ€™re in deep D&D territory here, thatâ€™s for sure.

As RPGs go, the plot is pretty simple: track down those responsible for turning the protagonistâ€™s guild into a pile of smoking rubble. Simple, yet enough to felicitate a wealth of sub-quest and optional companion quests for each party member. Thanks to avoiding well-worn RPG tropes, the characters are likeable enough for you to want to take time out and help them with their personal problems.

We quickly grew fond of burly dwarf Larathar in particular, who provides some well-timed comic relief (â€œThereâ€™s only one thing I hate more than spiders, and thatâ€™s socks with holes inâ€) and relies on a swig of strong liquor to get back on his feet. Other members meanwhile include the softly spoken teenage wizard Hommet, and Illydia – a Moon Elf who can bless the whole team and throws â€˜Goodberriesâ€™ (great name there, guys) at party members when their health gets low. 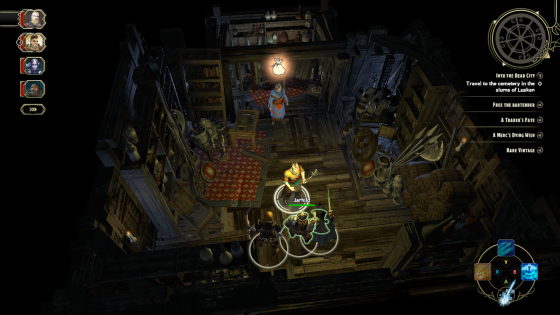 Party AI is neither intrusive nor obstructive

Each member has an elongated skill tree, with a mixture of magic and melee attacks, plus passive skills such as lockpicking. Over time youâ€™ll learn what skills to pile upgrade tokens into – thereâ€™s not much point in making every member a â€˜master of unlockingâ€™ seeing itâ€™s possible to swap between them at any time. The idea, of course, is to keep a balanced mixture of ranged and melee fighters, with your own character customisable as you see fit. Wizard, Ranger, Cleric and other classes are available. Thankfully, you donâ€™t have to worry too much about leaving party members on the bench as more join your cause, as during cut-scenes and conversations they’ll chime in telepathically.

Generally speaking, party AI is neither intrusive nor obstructive. They always stay close by, and can be seen using their magic attacks and such sufficiently. They wonâ€™t revive fallen members, however, leaving you to always come to the rescue.

We canâ€™t be quite as positive in regards to the combat system, which is rather lacking despite a tactical stance which pauses the action. The phrase â€˜All or nothingâ€™ springs to mind when it comes to enemy confrontations – youâ€™ll either be faced with a few measly wolves, giant rats or spiders that can be defeated with just a few sword swings and fireball flings, or a large gangs of guards and heavily armed cultists thatâ€™ll wipe your team out in seconds. Annoyingly, itâ€™s usually during the latter instances that youâ€™ll discover the auto-save hasnâ€™t kicked in for some time. 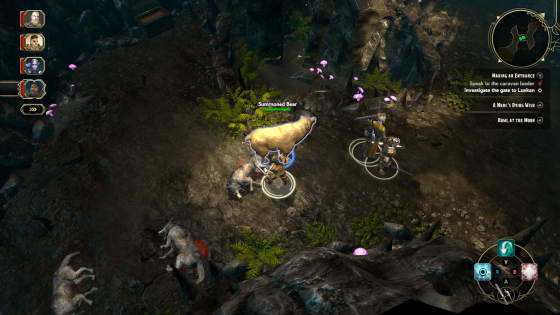 For the first few hours we felt like a passenger rather than a participant during combat as the AI mopped up most of the enemies. When the difficulty level did finally rise, some ten hours in, it hit us hard as we were far from prepared. This is when we started to pay closer attention to inventory management and making use of the perk bestowing potions weâ€™d acquired along the way. Having four switchable characters does, somewhat predictably, mean you have four inventories to manage. Loot drops arenâ€™t quite as common as in Diablo III, but they still appear at a steady rate – mostly gained from locked chests – and so the whole team will gain almost completely new kit every couple of hours.

While you wonâ€™t be spending too much time looking at dull inventory screens, you will definitely spend a lot of time aimlessly wandering while wondering if youâ€™ve overlooked something. Alas, it isnâ€™t just the combat that suffers from pacing issues but questing too. This is a very slow-paced experience, to the point where it can be described as the exact opposite of thrilling. The cityâ€™s sewer system, in particular, is a pain to navigate and explore due to being broken up into numerous, almost identical looking, areas.

The lengthy loading times are the real enjoyment killer here, though. Oh, the loading times – theyâ€™re so exceptionally long that we almost dedicated the opening paragraph to a little rant about them. 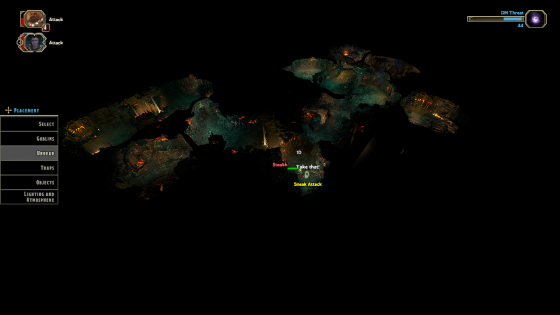 To begin with, they arenâ€™t too much of an annoyance as the first few areas (an open forest and a mercenaryâ€™s den) are rather large. Youâ€™re then ushered into a large market district which has paths leading off to the slums, graveyard and more. This is where the problems start as these areas are much smaller but still force you to endure a good 2-3 minute loading screen when visiting each. Unbelievably, we even had to suffer a long loading screen just to quickly enter a single-screen bear cave. And the bear wasnâ€™t even at home. Joking aside, the long loading times present problems more than trivial – they discourage exploration and also make Sword Coast Legends a chore to play.

Once while playing co-op online we accidentally went to the wrong area, which made us feel obliged to send all party members an apology via Xbox Live messaging for wasting a good three minutes of their valuable gaming time. Unless itâ€™s a Telltale adventure, a game should never make you feel guilty for your actions.

At least the Dungeon Master mode has shorter loading screens. Itâ€™s a pretty decent addition to an already large game, in fact. Here, one player acts as a Dungeon Master and is presented with an overhead view of a cavernous maze, with various themes and sizes available. Players then enter your custom creation, and itâ€™s your job to place traps and enemies in their way to make the task of escaping (side-quests are also optional) a tricky one. The novelty and entertainment value is a little short lived, but itâ€™s still a pretty significant extra that youâ€™ll probably remember more than the main game itself.