By combining too many elements from different genres, some games feel like theyâ€™re unsure what they want to be. Being a relatively straight-forward â€˜boss rushâ€™ hack and slasher, The World II: Hunting Boss isn’t a victim of this. Instead, itâ€™s simply confused about what it wants to be called with variations of its name appearing all over the place. Weâ€™ve gone for the name itâ€™s referred to on the title screen, but you may know it as The World II: Empire in the Storm – the name used in the achievement list, and also name it had when it debuted on mobile. Consider us confused.

Yes, this is another mobile conversion that’s ended up on Xbox One. All the way from Taiwan this time, which would (partly) explain why the dialogue is riddled with spelling and grammatical errors. Fortunately, the problems within the presentation are easy to look past. You could even say they help to give the game a hint of personality – weâ€™re rather fond of the nonsensical, almost haiku-like, boss descriptions. 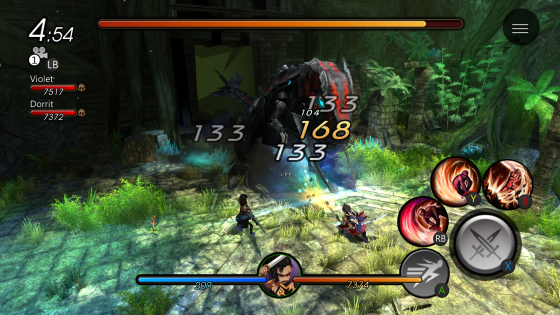 Harder to look past; the huge attack icons on the side of the screen, which acted as virtual buttons in the mobile version. Now they simply act as cool-down timers. Really large, predominantly placed, cool-down timers. Each of the three playable characters – one male, two female – has a trio of attacks with a different range. It boils down to luck as to whether these attacks will find their target though as thereâ€™s no ability to lock onto foes.

Bosses do however often become dazed and collapse on the ground for a few precious seconds, providing the ideal time to strike with everything youâ€™ve got. Some colour-coded attacks can be dodged via a (badly animated) forward roll, and thatâ€™s about it as far as depth and tactics are concerned. No different weapons, health packs, or other consumables feature. Nothing.

Roughly 30 minutes into the proceedings two AI partners join your team but being the simplistic game that it is, thereâ€™s no way to give cohorts commands during battle. They can at least be observed giving it their all, using special attacks and generally milling underneath the bossesâ€™ feet. 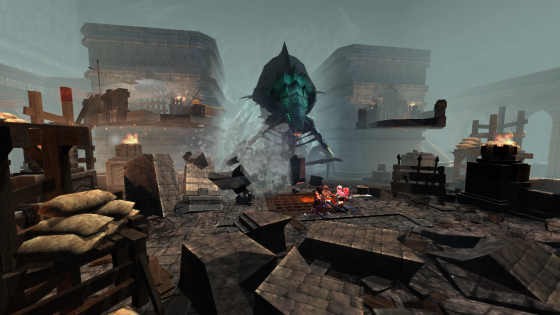 Once dead, thereâ€™s no way to revive them – youâ€™re on your own from there on in. Annoyingly, it appears that itâ€™s scripted as to when team members snuff it, and so during the later stages – when the difficulty level finally starts to kick up a gear – youâ€™re often the last one left standing.

At the end of each battle XP is earned, improving those all-important stats. The bosses start to be recycled way before even reaching the level cap halfway point though, and youâ€™ll almost certainly have to resort to grinding at some point. Indeed, itâ€™s the lack of content thatâ€™s the killer here, forcing you to fight the same bosses over again, only with a longer health bar than before and maybe a colour palette swap. 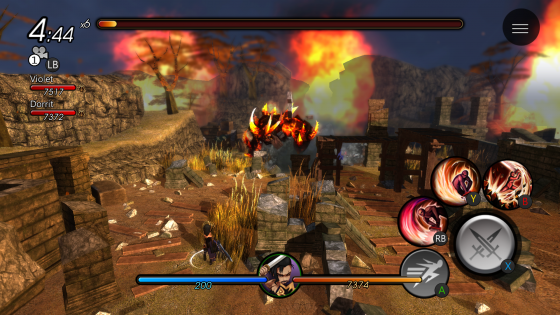 The World II: Hunting Boss isnâ€™t entirely without character or appeal though. To wit: the bosses include a giant ape forged from molten rock, a Transformers-esque metallic dinosaur, a cleaver-dragging butcher and an obligatory screen-filling dragon. Thereâ€™s a one-eyed beholder, too, which stands out from the rest of the pack thanks to some rather comical facial expressions and a clear problem with flatulence.

Potty humour wonâ€™t get you far in life, and neither does it give The World II: Hunting Boss wind beneath its wings. Visually it isnâ€™t quite as rough as we initially imagined, resembling a mid-life Xbox 360 game for the most part, but the rest of the game was exactly as we expected considering itâ€™s a mobile conversion with a Â£3.99 price point – restrictive, repetitive and ultimately throwaway.