When it comes to Ghostbusters games a few instantly spring to mind. Activision’s original movie tie-in from 1984 is likely to be well-remembered as it ended up being released on just about every format from the ‘80s. Even the humble Atari 2600 saw a conversion.

That game spawned a run-and-gun sequel, which while wasn’t as popular as the original, hasn’t made this list. Neither has SEGA’s Mega Drive Ghostbusters platformer, which was an early release for the then fledgeling format. Of course, we can’t count Atari’s multi-format 2009 Ghostbusters game either – a game with a script so witty that fans often refer to it as the Ghostbusters 3 movie we sadly never received.

The games below are scarcely known due to various reasons. Some were PAL only, one was a lazy reskin while another arrived so late in a system’s life that it didn’t stand a ghost of a chance. Let’s heat’em up!

Konami’s arcade games based on the X-Men, Teenage Mutant Ninja Turtles and The Simpsons are much-loved classics. Filled with references from their source material, they captured the spirit (no pun intended) of the cartoons on which they were based. 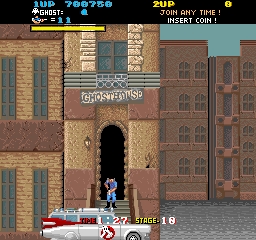 Developed by Data East in 1987, this ten stage top-down shooter is the complete opposite. Visuals were small and weedy, lacking appeal, while backdrops were equally drab. Even the four playable characters failed to resemble the cartoon’s cast – Slimer (used here as a power-up) is the only recognisable star. The result is a game that’s as dreary as its colour palate.

The Ghostbusters HQ is another example of the game’s vapidness, appearing to be made entirely out of sand.

Over in Japan, it was released under the guise of Meikyū Hunter G and all traces of the license were removed. This may explain why only generic ghouls and ghosts feature, rather than the likes of the Stay Puft Marshmallow Man. A release for computers was eventually secured via Activision, arriving on the Amiga, Amstrad CPC, Atari ST, Commodore 64 and ZX Spectrum in 1989. The developers of these versions added faithful renditions of the Ghostbusters theme tune, along with new artwork for the loading screens.

Also based on the popular Ghostbusters cartoon, this puzzle/platformer hybrid was released six years later than Data East’s coin-op. All signs point to Kemco picking this license up on the cheap – by 1993 the animated series had come to an end, while the tie-in toys could be found lingering in bargain bins. 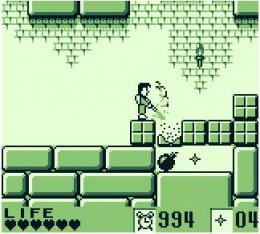 Only the sprites were changed from one iteration to the next; no ideas or features were added. As such, it doesn’t look nor feel like a Ghostbusters game at all. Only Peter Venkman is playable, while the proton pack is used here to drill holes in the ground to trap enemies. Using a particle accelerator as an everyday workman’s tool? Somebody call health and safety.

Released only in Japan and Europe due to a licensing entanglement with Activision, this top-down adventure/shooter was developed by HAL Laboratories. Yes, the same HAL Laboratories that went on to give the world Kirby, Mother (Earthbound), Super Smash Bros. and most of the N64’s Pokemon games.

It’s an 8-bit Ghostbusters game made by Nintendo, essentially. This means it featured a very quintessentially Japanese visual style, with characters having tiny bodies and huge heads. For the first time on this list, we finally have a Ghostbusters game with a fully recognisable cast. And like many Japanese games based on western licenses, it’s a tie-in treated with care and respect. 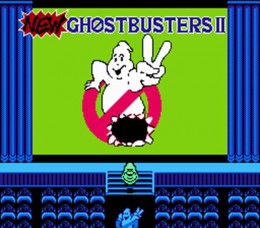 Following the plot of the movie closely, it used several key locations – including the courtroom scene with the Scoleri Brothers – and also featured Louis Tully as a playable Ghostbuster. Now that’s fan service.

Two Ghostbusters featured on screen at once – the main character captures ghosts, while the second – controlled by AI – trailed behind placing traps. Once all the ghosts within a stage were found and caught a boss battle occurs.

Being an 8-bit game however, the AI was far from intelligent. Cohorts could be frequently found caught behind objects, prompting you to go back and usher them back on track. Sadly, a two-player mode – which would have removed this fault entirely – didn’t feature.

Don’t let these problems put you off giving this one a go, though. It’s a contender for one of the best movie tie-ins on NES. Or Game Boy, for that matter – the handheld version featured the same SD visual style, but offered new levels, making it a decent companion piece.

Another European exclusive, but due to a different reason as the above. Activision had a change of heart and decided to cancel the release of this 1989 Atari 2600 movie tie-in on the grounds that the system was well past its prime. Step forward UK publisher Salu, who picked up the rights and released it exclusively in Europe some three years later. 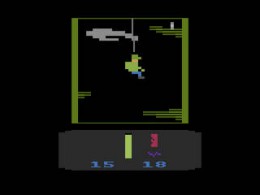 To put this into perspective, Klax is the last known NTSC Atari 2600 game, arriving in 1990 – thirteen years after the console was first released. Ghostbusters II reached PAL gamers in 1992; the same year Sonic the Hedgehog 2 was released on the Mega Drive, and a year after the launch of the Super Nintendo. It wasn’t the last PAL Atari 2600 release however – Salu’s own Acid Drop takes that accolade, also released in 1992. The Atari 2600, as well as other 8-bit formats, enjoyed a much longer life in Europe as the NES didn’t quite have the same impact here as in the US.

Like its computer counterparts, this movie tie-in starts with an unidentifiable Ghostbuster being lowered into a ghoul-infested sewer, busting ghosts while avoiding the arms that emerge from the walls. The second – and altogether more impressive looking – stage is a 2D side-scrolling shooter starring the Statue of Liberty. Or to be more exact, the Statue of Liberty’s torch – the iron giant herself isn’t shown on screen.

A late release for the PSone, this on-rails light gun shooter from French outfit LSP retailed for £9.99 and was released alongside a handful of other budget games. This was (and probably still is) a decent way for publishers to save on distribution costs – it wasn’t uncommon for notorious PSone budget purveyors Phoenix and Midas Interactive to ship several games at once. 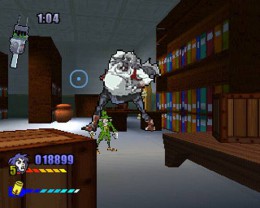 As PSone budget games went this was one of the better examples, although that’s not really saying much. It featured clips from the ill-fated cartoon series – in which Egon acts as a mentor for a new generation of ghostbusting youths – and the 3D visuals weren’t entirely without merit.

The ghosts themselves were 2D sprites, however, and we all know that sprite scrolling wasn’t exactly the PSone’s forte. Just ask any fan of Capcom’s 2D brawlers from this era. While ducking and dodging hazards in a similar manner to Time Crisis, easily the game’s biggest influence, crudely drawn creatures shambled into view, going from pixelated messes to…slightly less pixelated messes.

The ghosts were few in number too, made up of an assortment of generic floating ghouls, zombies, zombie bikers and evil leprechauns. We always thought leprechauns were elusive creatures, but here they’re everywhere, making up approximately a quarter of the bad guy roster. Hordes of zombies? A video game staple. Hordes of leprechauns? Only in Ultimate Invasion. 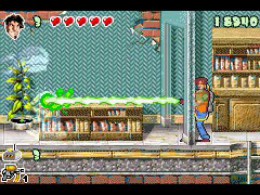 The GBA version – subtitled Code Ecto 1 – was a reasonably attractive game with detailed backdrops and alluring transparency effects, but was rendered almost unplayable by jerky scrolling. Whenever the proton pack was used the action came to an abrupt standstill as it was impossible to run and ‘shoot’ at the same time, thus causing the screen to nauseously jolt and jitter.

Known simply as Extreme Ghostbusters, the GBC iteration meanwhile was a pretty but vacuous 2D platformer. That doesn’t stop it selling for around £20-£30 on eBay though, due to its rarity and general desirability. You could say the only thing extreme about it is the price it currently sells for.