In the words of Bruce Forsyth (and later Joe Pasquale), the price is right. You certainly wouldnâ€™t want to pay more than Â£3.99 for this mobile conversion – itâ€™s a no-thrills package, that hasnâ€™t seen any major enhancements other than a new four-player mode. Well, that and the removal of in-app purchases.

Thank Pac for that.

Due to their heavily stylised nature, we can live with the fact that the graphics havenâ€™t been improved, but the lack of music strikes us as a very peculiar omission. Remember that compelling, pulsating, soundtrack that featured in the wonderful Pac-Man Championship Edition? Here, thereâ€™s a short remix of the classic theme-tune on the title screen, and after that youâ€™re left only with Pac-Manâ€™s infamous â€˜Wakka wakkaâ€™ noise to tap your toes to. Itâ€™s really quite odd. 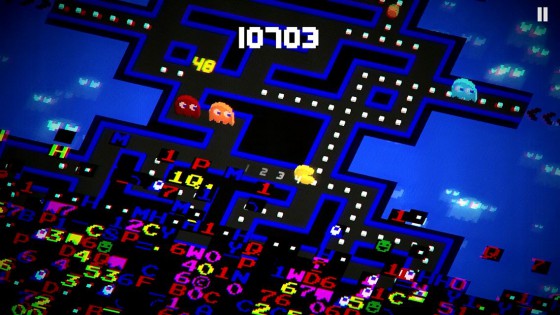 Being a mobile game originally, the gameâ€™s structure feels rather out of place on console too. Itâ€™s a score chaser like granddaddy arcade Pac-Man, only now an assortment of power-ups are drip-fed to keep players hooked, all of which can be upgraded to improve chances of survival. On mobile, you could pay to (potentially) win. With IAPs removed itâ€™s now a sheer case of focusing on completing challenges in order to acquire enough upgrade points to max out power-ups. Upgrades start off cheap, rising to the point where they become several games apart. â€œFreeâ€ gifts do thankfully speed up this process, while also serving as an unwelcome reminder of the gameâ€™s roots.

Three power-ups can be in Pac-Manâ€™s arsenal at once, found at random within the endless colourful maze. Thatâ€™s endless in the sense that the screen scrolls upwards indefinitely; the central premise is to escape the corruption rising from the bottom of the maze – a reference to a glitch in the arcade original, which occurred during the 256th stage. These power-ups – including lasers, burning trails and tornadoes – help to eradicate the ghosts, while assisting in keeping the multiplier chain going. 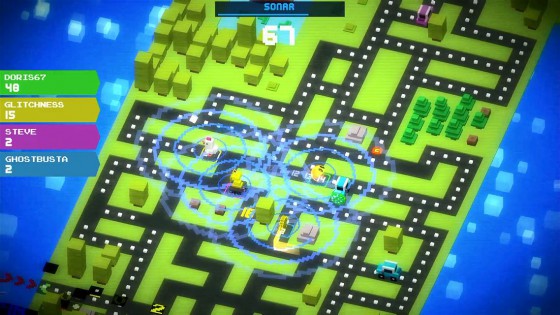 Ingeniously, pills no longer continuously fill the pathways – theyâ€™re now placed sporadically. Taking the wrong route can lead to a break in the chain, instantly ending a score multiplier streak. This sometimes encourages you to dice with death, getting up close and personal with ghosts just to keep a chain going. Itâ€™s a clever little mechanic that doesnâ€™t really come into its own until the challenges for beating certain high streaks appear. Beating previous records feels both compelling and rewarding from thereon in.

Alas, it isnâ€™t enough to prevent tedium from settling after just a few hours; this is a game intended to amuse and entertain for short periods of time, not lengthy caffeine fuelled console gaming sessions. We imagine this is why the developers felt the need to add a four-player mode, which while is a pleasing enough addition, doesnâ€™t stop the package as a whole as feeling a little throwaway. For a game centred on eating, there certainly isnâ€™t much to get your teeth into here.