Microsoft has announced a new slimmer Xbox One at E3, imaginatively titled the Xbox One S.

Available in â€œrobot whiteâ€, the new console is 40% smaller, has a built-in power supply and can be stood horizontally or vertically with an optional stand (set to retail for $19.99).

4K output is another feature (including 4K Netflix and Amazon Video streaming), accompanied by High Dynamic Range (HDR) support, allowing for a higher contrast ratio between lights and darks.

To make the Xbox One S as small as possible a compromise has been made, but itâ€™s one thatâ€™s unlikely to be a cause for concern. To wit: the dedicated Kinect port has been removed.

An Xbox Kinect Adapter will instead be required. Existing Kinect owners can grab this for free via http://www.xbox.com/XboxOne/KinectAdapter (note: link currently inactive). 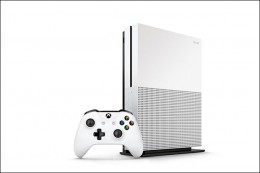 Not content with giving the Xbox One an overhaul, the new console also comes with a redesigned controller. Offering twice the wireless range, it has a textured rubber grip, an improved thumbstick and Bluetooth support for Windows 10 devices.

Existing Xbox One owners can grab this tweaked controller individually. A RRP of $59.99 has been set, making it a somewhat cheaper alternative to the Xbox One Elite.

A price tag of $299 has been confirmed for Xbox One S, along with an August release date. According to Microsoftâ€™s press release though, the first iteration out the door will be a special 2TB launch edition retailing at $399. The $349 1TB console and $299 500GB models are set to arrive shortly after. UK pricing currently unknown.