The hallmark of a decent puzzler is the presence of a rather elusive quality. Become stuck on a puzzle, and youâ€™ll doubtlessly start to feel as dumb as a post; a feeling that can be instantly replaced with both smugness and satisfaction upon working that problem out for yourself. Itâ€™s a sensation few other genres can bestow.

Reading between the lines, then, itâ€™s possible to gauge how good a puzzle game is by how stupid it makes you feel. After gaining the achievement for dying 100 times approximately thirty minutes into the proceedings, In Between made us feel like somebody who had a joypad thrust into their hands for the first time ever. 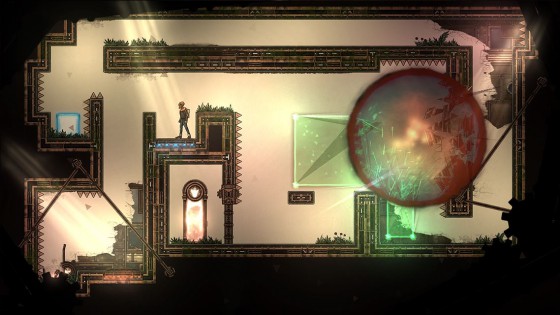 Death comes thick and fast in this 2D physics-based puzzler, which is rather apt considering the acceptance of death is the gameâ€™s focal point – playing as a person recently diagnosed with cancer, the narrative draws upon the sensation of loss, with stages centred upon grieving; denial, anger, bargaining, depression and acceptance.

Itâ€™s a platformer minus a jump button, essentially – the idea is to alter gravity and walk along walls and ceilings to reach the exit, avoiding spikes, moving blocks and other hazards. The twist is that when do so, blocks – of varying sizes – and sliding platforms also change location, gaining momentum along the way. It only takes one incorrect flick of the analogue stick to send a moveable block hurtling towards your face. Puzzles are punctuated with visual mind images (read: memories) that pop up within the backgrounds, detailing key moments of the nameless heroâ€™s life. Interactive cut-scenes feature between stages too, helping to connect with the protagonist further and making the abstract nature of the puzzles a tad more coherent.

A good example here is the cut-scene showing our lead as a child, scared of the dark while camping in the back garden. His mother then presents him with a torch, and so the next set of stages focus upon pushing back the darkness – a black thickness that creeps in from the side of the screen, eradicated only by approaching it face on. Think along the lines of the ghosts in Super Mario World.

Darkness is then replaced with anger, drawn from the leadâ€™s loathsome office job and represented in-game by glowing red orbs that can be tricky to dodge. Other ideas are slowly introduced likewise, while the presence of alternative gravity zones helps to put a spin on ideas familiar. 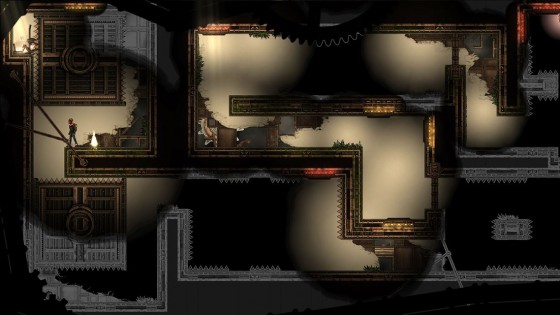 The goal of each puzzle – to reach an exit – remains the same throughout, however. Puzzles start off small, barely taking up more than a single screen, but soon evolve to the point where multiple checkpoints are in place. We have no qualms in admitting that we didnâ€™t beat a single stage on the first attempt, which speaks volumes about the general level of difficulty.

In Between presents a substantial challenge. Some of it boils down to simple trial and error, and there are a few instances that frustrate due to a combination of finicky controls, harmful objects getting lost in the background and the gameâ€™s somewhat experimental nature. Youâ€™ll always find yourself trying again though. And thatâ€™s also the sign of a decent puzzler.