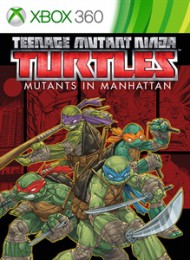 Overwatchâ€™s arrival pushes Uncharted 4: A Thiefâ€™s End down to #2. DOOM – which we reviewed last week – falls one place also, as does fellow recent release Homefront: The Revolution.

GAME has reduced Homefront to Â£34.99, which may explain why it hasnâ€™t dropped significantly during its second week of release – the ragtag shooter currently has a Metacritic of a mere 49%.

TMNT: Mutants in Manhattan is the only other top 40 new arrival, making its mark at #18. The PS4 version appears to be the biggest selling, and by some margin.

Fire Emblem Fates: Birthright and Conquest both remain in the top 40 meanwhile, now at #23 and #24 respectively. Yo-Kai Watch is clinging in there too, albeit at #40.

Weâ€™re also going to give Battleborn a shout out – sales have improved a tad since the price drop, helping the Borderlands alike rise from #27 to #20.