Just as the original DOOM built upon the foundations of Wolfenstein 3D, this long awaited franchise reboot learns from 2014â€™s acclaimed Wolfenstein: The New Order. Not only does it expand upon certain areas, with visuals that are approaching CGI quality in places, but it also strips back the bloat many first-person shooters suffer from.

The result is a game thatâ€™s unmistakably DOOM.

Right off the bat a pistol is placed in the mute marineâ€™s hand, indulging players with a spot of grizzly demon slaying. Thereâ€™s no opening cut-scene or anything of the sort, save for a short interlude a few minutes into the game where the nameless hero steps into a suit of power armour; an ancient artifact discovered on Mars, along with the answer to unlimited energy. 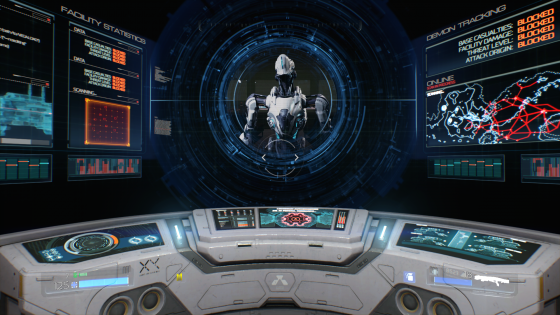 From start to finish, no other human soul is seen. Youâ€™re instead instructed by a softy spoken AI overseer known as VEGA, and the charismatic Dr. Hayden – a cyborg who sounds uncannily similar to Optimus Prime. For the entire gameâ€™s duration we firmly believed that Peter Cullen supplied Haydenâ€™s vocal talent. The ending credits however revealed a case of mistaken identity. Hayden and VEGA are able to track the location of Olivia Pierce, a cyborg doctor who has sided with the demons in hope of creating a new world.

Backstory are lore can be taken in at your own pace, as both take a backseat – DOOM features surprisingly few cut-scenes, preferring to put the focus on pleasingly raw shooting mechanics.

By which, we mean thereâ€™s no reload button – when a weapon is out of ammo, it’s automatically replaced with the next in the weapon wheel. Thereâ€™s no run button either – DOOMâ€™s pleasingly heavy-handed hero constantly sprints through the blood spattered corridors of the UAC Mars base and the candle lit catacombs of Hell. Weâ€™re going to go ahead and assume they arenâ€™t scented candles. 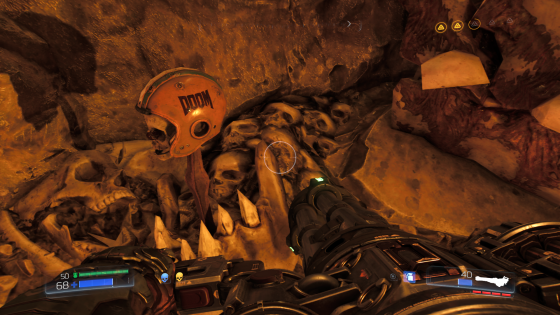 During the first three hours or so progression centers heavily on discovering and experimenting with new weapons, each bigger and more menacing than the last. Picking up a new weapon is akin to being presented with your firstborn child, and itâ€™s this sense of enthrallment that DOOM borrows from The New Order. Apart from the rather puny plasma rifle, all of the weapons are full of intricate detail and most can be upgraded with two optional mods. These can be switched out in a blink of an eye, prompting a brief yet stylish animation.

the level design puts that of its peers to shame

That, and general combat proficiency. DOOM rewards players for grizzly kills; every enemy can be finished off with a swift two punch combo or similar, resulting in an often much-needed health boost. Every enemy poses a sizeable threat, able to take our demon slayer down with just a few hits, and as such â€˜gore killsâ€™ are relied on to keep the health meter full. Armour shards and health packs are (highly) common occurrences too, littering the environments. Another throwback is the requirement to find colour-coded key cards to progress. We did worry that this trope would be a little too â€˜old skoolâ€™ for its own good, but this isnâ€™t the case – everything in DOOM feels coherent, resulting in a package thatâ€™s almost seamless. 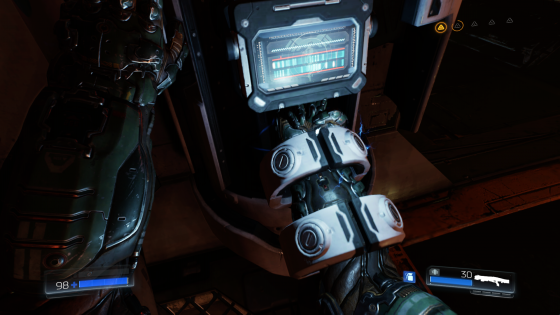 One thing it certainly isnâ€™t is mindless, as thereâ€™s tact to the combat. Every mission features a few locations where enemies swarm in increasingly stronger waves. The music – a mixture of heavy rock and dubstep – kicks up a gear, while a constant barrage of enemies swarm towards our hero. Enemies are relentless in their pursuit, as most are able to jump high distances to reach your location. Switching weapons frequently is essential for survival as some are better suited for certain threats, especially when upgraded.

The chainsaw makes a welcome return too, only now ammo (read: fuel) is scarce. This encourages it to be used sparingly, either to take down a wave of Imps in a matter of seconds or a larger enemy in one fell swoop. The same goes for the BFG, the appearance of which is tantalisingly teased early-on.

Power-ups make a comeback likewise, including Berserk and Quad Damage. Using them ASAP isnâ€™t always the best strategy, as itâ€™s often wise to use them only when the larger demons arrive and things really get hectic. 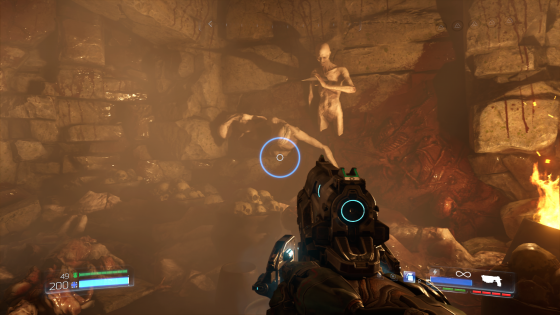 At around 12-13 hours, the campaign is certainly longer than most. In typical id Software fashion, the level design puts that of its peers to shame. Itâ€™s impossible to imagine players becoming lost, thus frustrated, while exploring Mars and Hell due to the subtle use of markers. Every mission also has several secrets to discover, from small alcoves with extra armour to precarious jaunts across cliffside ledges to find entire hidden rooms filled with goodies and the occasional Easter Egg. Itâ€™s unlikely that every secret will be discovered on the first playthrough.

Something else to search high and low for are Runes. Runes teleport players to an arena in order to partake in a tough but fair challenge, such as finding and shooting 30 barrels within a small labyrinth before the timer is up. The reward is a perk-bestowing rune, which can also be upgraded by completing the linked challenges. This provides something to divert attention to, while prompting a change in tactics or calling upon an older weapon – such as the pistol – to come out of retirement.

Incidentally, we love how the shotgun remains a focal point of the ordnance throughout. It’s the gun with a million uses. 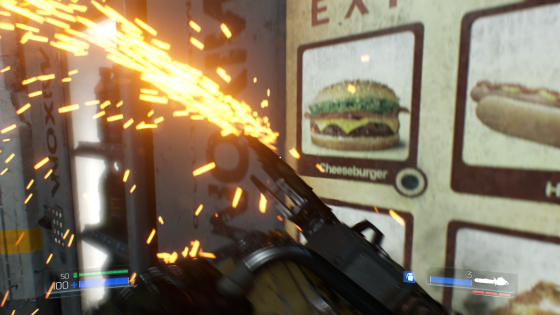 For DOOMâ€™s multiplayer mode the reigns were handed over to Certain Affinity, who has lent a helping hand with Halo and Call of Duty over the years. Like the main campaign, itâ€™s unmistakably DOOM but with all the comforts of a modern FPS. This means experience level based unlocks, character customisation and personalised loadouts. Also: amusing taunt animations. The weapon roster from the main game has been completely retooled for multiplayer, with a handful of new weapons making an appearance. Some weapons have been redesigned here too, such as the sleeker rocket launcher that no longer occupies approximately quarter of the screen.

Matches have a genuinely â€˜old skoolâ€™ ebb and flow to them, and comparisons with Unreal Tournament arenâ€™t entirely invalid. It takes around two direct hits to kill an enemy and around four indirect hits. As such, precise aiming and fast reflexes are crucial (and, thankfully, this also means that one-hit rocket launcher kills are out of the equation). Having a decent amount of armour – again found strewn around the environments – will absorb the damage from a grenade, meanwhile. The key to success is to constantly keep moving, picking up readily available health packs and armour the moment either takes a dive.

Itâ€™s also possible to transform into a demon during multiplayer, with new demons unlocked by rising up the ranks. A demonic rampage can catapult the weakest player in the team to the top of the scoreboard, giving every player a fighting chance and the opportunity to bask in the limelight. Temporary Hack Tools also give a sly advantage, showing the location of the enemy who killed you last, or bestowing extra XP per team kill. Some Hack Tools do throw the balancing off kilter though, and itâ€™s impossible to tell what tools the opposition has. 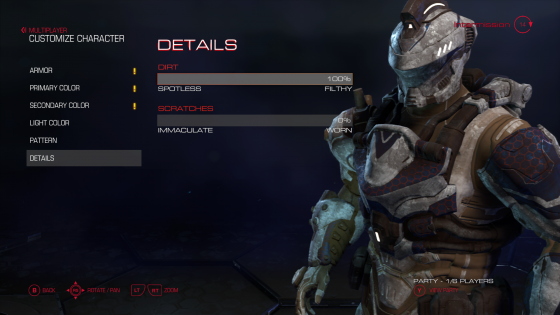 Finally, thereâ€™s the SnapMap mode. Itâ€™s something of an acquired taste, but makes the package feel whole regardless. In laymanâ€™s terms, itâ€™s DOOMâ€™s equivalent of Haloâ€™s Forge. A better comparison however would be Microsoftâ€™s now defunct Project Spark, due to the ability to link objects and set protocols via logic gates and integers. It may sound complex, but thanks to user-friendly tutorials it doesnâ€™t take long at all to start creating and sharing maps, challenges and mini-games. â€œIt only takes five minutes to snap a mapâ€ is the ethos here, referring to the ability to snap pre-constructed map pieces together. Enemies, weapons and power-ups can then be placed as seen fit. Fans have already re-created a bunch of classic DOOM maps. An XP system holds it all together, unlocking new icons and objects.

Itâ€™s more than apparent that id Software examined their seminal shooter closely when creating this reboot. They deconstructed DOOMâ€™s DNA and extracted what makes it enjoyable to play, even today. The fundamentals of the franchise – the relentless shooting, glorious ultra violence and tight level design with secrets galore – have been merged with modern day sensibilities, such as proficient checkpoint placing and gentle hand holding. DOOM really does give us the best of both worlds; a glorious combination of long lost ideas and new technology.

Itâ€™s good to have you back, DOOM. Donâ€™t leave it so long next time.