It only takes one success story to put a studio slap bang on the map. For Housemarque that game was PS3 hit Dead Nation, which was followed up with the equally popular Super Stardust. Then came Resogun, the shining star within the PS4â€™s launch line-up. Long after the novelty of Killzone: Shadow Fallâ€™s visual sheen had worn off, Resogun was the game many found themselves returning to.

Since then the Finnish studio has been beavering away on Alienation, a sci-fi twin-stick shooter with a whiff of Destiny about it. It has a similar focus on online co-op, along with colour-coded loot drops, three character classes, timed events, missions set on Earth, and tougher commander enemies with randomised powers. If Bungie was asked to give Destiny the Halo: Spartan Assault treatment, chances are Alienation wouldnâ€™t be far removed from the end result.

Up to four players can buddy up at once, with each mission having its own matchmaking service that allows you to jump into missions with players from all over the world. The ability to give simple verbal commands via the d-pad removes the language barrier entirely. Downed players can call out for help, experienced players can lead the way with a simple â€œOver here!â€ and after taking down a boss or completing a challenge usually a chorus of â€œNice!â€ is heard. 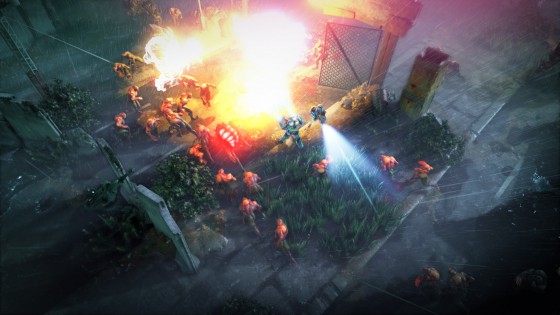 While smaller in scale to Bungieâ€™s sci-fi opus, and for reasons other than the top-down perspective, Alienation is a whole lot faster paced. Loot flows freely, but due to the omission of a pause button thereâ€™s often little time to mess around with the oh-so-stylish inventory. When playing with others the host is in charge of mission picking, and so youâ€™re at their mercy of providing time to tinker with weapons. Thankfully, then, thereâ€™s a â€œWait!â€ command too.

Like Destiny, Alienation doesnâ€™t really come into its own until the â€˜end-gameâ€™ either. The globetrotting campaign – set in such locations as Brazil, Pripyat and the Antarctica – takes around 3 hours to finish, depending on difficulty level and the shooting proficiency of your fellow teammates. The harder the difficulty level, the higher the chance of rare loot drops. By the time the campaign ends, most players seem to be around level 15, and so generally it takes around two runs of the campaign to reach the current cap of level 30. After beating it once, the focus shifts on completing unique assignments, such as killing select enemies with certain weapons, while tackling missions on higher difficulties. The list of enemy types is surprisingly long, with some of the rarer kinds – such as translucent â€˜Ghostâ€™ aliens – only appearing during a handful of missions.

Although the environments within reach region do tend to blur into one another – with a mission to load and fire an old military cannon, and a jaunt into an alien mothership providing the few standouts – Alienation remains a treat for the eyes throughout. Housemarque has employed every visual trick in the book, from exemplary explosions to lavish smoke plumes. Itâ€™s the very epitome of a smart looking game. 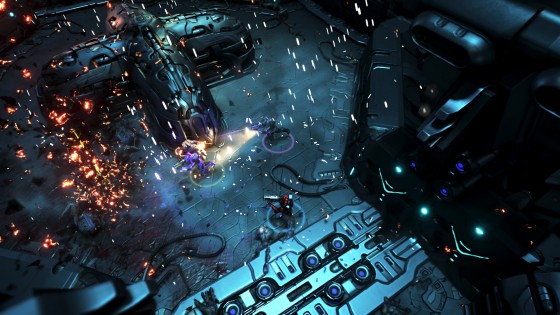 Itâ€™s within the shooting mechanics that it really excels however. To say that theyâ€™re refined would be an understatement. The right stick is used not to shoot, but to merely aim – itâ€™s the R2 button that unleashes bursts of hot lead. Primary weapons auto-fire, whereas secondary weapons (shotguns, revolvers and the straight-firing Powershot rifle) require a single press of R2. If you find yourself running out of ammo frequently, then chances are youâ€™re relying too heavily on a single weapon – the idea is to constantly switch it up. The later appearance of heavy weapons, including rocket launchers and flamethrowers, makes this task a little easier.

Ammo for heavy weapons is in short supply though, so itâ€™s best to save them for horde waves and bosses. Remote grenades additionally feature in the arsenal, which can then be swapped out for mines and boomerangs, all of which have a short cooldown period. Lastly, the â€˜active reloadâ€™ feature from Gears of War has been cheekily pilfered – pressing R3 in good time reloads weapons in a jiffy, accompanied by a rather satisfying sound-effect from the DualShockâ€™s speaker.

The majority of weapons can be upgraded as well as have their stats rerolled, with each reroll requiring resources gained from breaking down unwanted weapons. Presumably to prevent the inventory from getting too cluttered there are no alternative pieces of armour however, save for a choice of colour scheme. Although the amount of inventory space is finite, itâ€™s possible to both break down items and equip them while theyâ€™re still lying on the floor. Again, this helps to keep the pace up and inventory management down to a bare minimum. 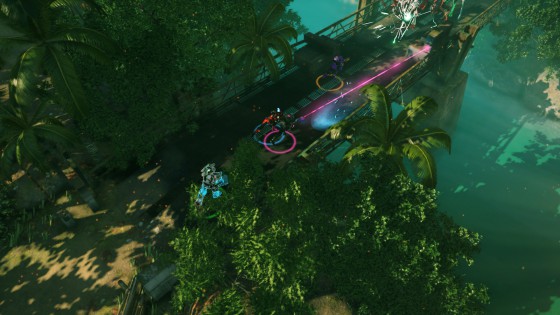 We also approve of the â€˜vaultâ€™ button – most objects can be vaulted over, which makes regrouping and a synch. The idea is to stick together; although the levels are reasonably large, thereâ€™s no scope for players to get lost or left behind. Or even for players to go exploring on their lonesome. Stroll too far away and youâ€™ll instantly warp back to the host. The fact that Housemarque has gone to great lengths to ensure a fast flowing experience is more than evident.

Indeed, it feels like a culmination of everything Housemarque has both learned and mastered over the years. This is easily their most ambitious undertaking, even if it does borrow from Destiny in a rather brazen manner. Ambitious, yet it remains focused – the shooting mechanics are so incredibly robust that everything else it excels at, from the ease of joining games to the simple but effective weapon upgrade system, can be seen as a bonus.

Revisiting previous missions in order to rise up the ranks may not be everybodyâ€™s cup of tea, but thereâ€™s no denying thereâ€™s plenty of glowing alien entrails and neon-hued laser blasts for your buck here.