To fully appreciate this turn-based war game itâ€™s imperative you learn its history. Lamenting the loss of such genre greats as Battle Isle and Panzer General, developer King Art Games turned to Kickstarter to fund their own hex-based sci-fi strategy series. Fully funded in almost time at all – a resounding $260,235 from 7,564 backers, no less – Battle Worlds: Kronos arrived on PC back in 2013, making good on that promise of giving gamers a spiritual successor to those aforementioned defunct franchises. Skip forward three years, both the PS4 and Xbox One are being treated to a belated console release via Nordic Games.

Retailing at around Â£15 – both digitally and in physical form – Nordic have effectively bought back the humble budget game. That price tag helps to forgive some of its shortcomings; as youâ€™d expect from a three year old game, BW:K is starting to show its age. Fancy visuals were obviously sacrificed for functionality, and that was back in 2013. 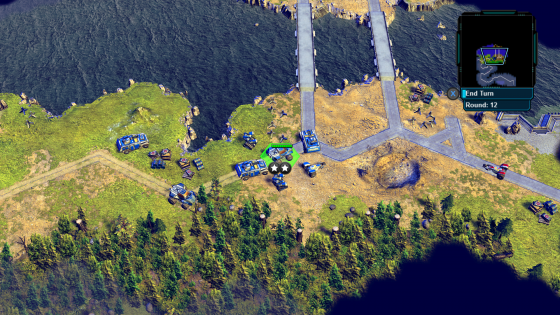 a pot of strong coffee will be your wingman here

King Art makes it clear from the outset that players shouldnâ€™t expect an easy ride. This is a brutally tough and challenging experience – one that isnâ€™t afraid of punishing players for becoming complacent, thus forcing them to learn by their own foolish mistakes. Even the tutorial presents a significant challenge, only teaching the basics before pretty much telling you to figure the rest of the game out for yourself. This entails experimenting with different unit types, as well as keeping mental notes of the hit ranges and fields of moment for each vehicle.

By the end of the tutorial – or to be more exact, after failing the tutorial several times – you should start to get the gist of the type of tactics employed here. Surrounding the enemy with units buffs damage, while unscathed units have stronger attacks than those about to hit the scrapheap. Some units can also counter attack, but only once per turn – tougher units can be used to absorb damage from these counters, while launching safe distant assaults from missile trucks and such. Missile trucks in particular are weak, even after leveling up, and so itâ€™s essential to keep them out of harmâ€™s way or behind heavy units. Only infantry can capture enemy bases, meanwhile. 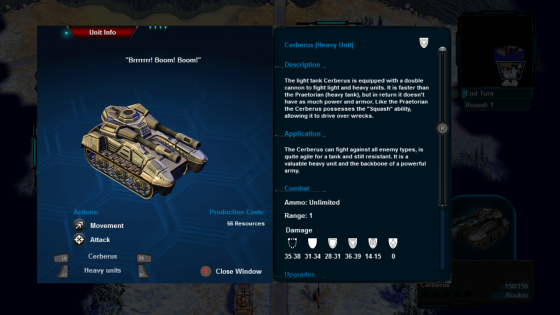 As as basic rule when planning each turn, itâ€™s vital to position your forces so they take as potentially little damage as possible. Fail to do so and youâ€™ll be left wincing during the enemyâ€™s turn – they never hold back, often targeting the weakest and most vulnerable units in your platoon. We wouldnâ€™t say that the enemy AI is a little too good however, as they are often reluctant to head towards your location. This appears to be a design choice, providing ample time to plan an approach.

The developers claim that every level can be beaten without losing a single unit, and weâ€™re inclined to agree. When revisiting previous stages – which initially seemed impossible – we found ourselves losing fewer and fewer units, while also clearing off the optional secondary objectives which we likewise deemed too tough first time round. Pro tip: save often.

In the absence of an â€˜easy modeâ€™ it is at least possible to summon reinforcements every ten turns. Doing so forfeits an achievement though – this is the kind of game that genuinely wants to reward players for their toil. You may curse the gameâ€™s difficulty at times, but with each and every attempt youâ€™ll find yourself getting further into missions and usually with more troops intact too. 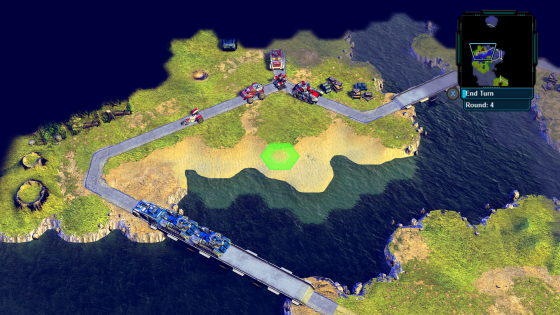 Itâ€™s also a good idea to pay attention to the tidbits the NPCs drop – if they casually mention that thereâ€™s a large enemy squad ahead, then you best try and find another way around. Fortunately, some missions – of which there are 12, along with a new 10+ hour campaign entitled Trains – feature harbours that can be used to ferry light units to nearby beaches. Itâ€™s telling that even learning how to load and unload units onto a ship can initially prove taxing. Indeed, BW:K can be user unfriendly at times.

Which is a bit of a shame, really. BW:Kâ€™s â€˜hard but fairâ€™ ethos is both justifiable and more than welcome, yet thereâ€™s much to be said about throwing the player into the deep end. This leads to some frustration early on, even making us question whether we were doing something wrong or overlooking a vital feature. In other words: BW:K doesnâ€™t make the best first impression, right to the point where it may drive some players away. Be patient with it though, and youâ€™ll find a game thatâ€™s both time-consuming and immensely rewarding. As an experience that requires an unsurpassed amount of commitment, a pot of strong coffee will be your wingman here.