Around a year ago Atari launched Asteroids: Outpost on Steam, a miserable mess that left fans of the arcade classic dumbfounded as to why Atari had turned the top-down space shooter into a sandbox survival game. In an ideal world they would have given Dead Star creators Armature – who are also currently working on Xbox One exclusive ReCore – the Asteroids rights. Dead Star is pretty much what Asteroids could have potentially evolved into, had the Atari we knew and loved kept with the times.

The premise is simple yet sound. 10v10 online battles against Scavengers and Drifters to capture and control as many bases within the asteroid littered battlegrounds as possible. The idea is to push the enemy back to their main base and take down its defences, all while keeping control of other zones.

Retaining control results in victory, as well as a screen-filling explosion showing the enemy base being blown to smithereens. As it just so happens, Dead Star has a rather nifty line of explosions. Alluring smoke plumes, too. 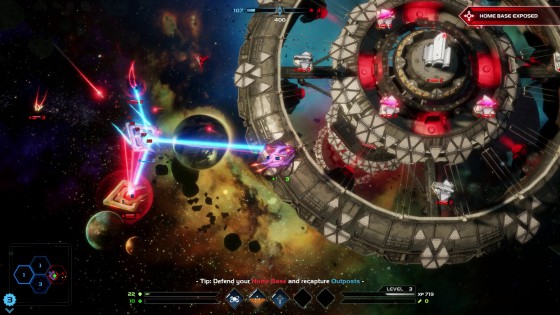 Dead Star doesnâ€™t feature an assortment of maps as such, simply different hex formations with every zone including a base to battle over. Asteroids, space wreckage and toxic storms fill the voids. When a battle commences both teams are as far apart as possible, and because other bases are occupied by AI controlled drones that have to be cleared out first, itâ€™s usually uncommon to come across a rival within the first few minutes of play.

Itâ€™s also wise to begin a battle by improving defences – some asteroids contain valuable ore that can be consumed to affix turrets and mines to bases. As itâ€™s possible to gain XP from doing so, observing players base boosting rather than engaging the enemy isnâ€™t rare.

As previously stated, the set-up is simple. The real depth lies within experimenting and upgrading the wide choice of spacecraft, while fine-tuning those all-important twin-stick shooting skills. Nine spacecraft feature – a mixture of small, medium and large with the obvious pros and cons – and before battle commences three have to be chosen to form a loadout.

Getting to grips with each takes a notable amount of time, and this isnâ€™t always a pleasurable pursuit. Drifting slowly through space in a bulky cruiser is far from exhilarating. Indeed, picking the right craft for the current state of battle plays a key part in each success. Over time youâ€™ll no doubt find the perfect trio, and chances are youâ€™ll end up sticking with them too. 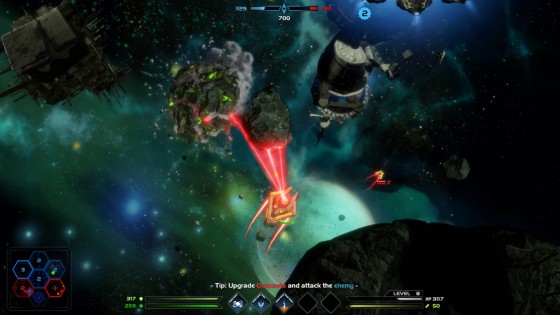 Itâ€™s the assortment of weapons that makes the craft stand out from one another. Charged shots, homing missiles, slow burning beams, explosive rounds, short-range teleportation and more – each has five different distinct abilities, slowly unlocked and upgraded during battle. Generally speaking, primary fire can be dealt in all directions while charged shots can only be fired forward. The latter are devastating, but larger craft in particular are reduced to â€˜sitting duckâ€™ status while charging up these shots. Learning when and where to use certain manoeuvres can make a huge difference in the K/D ratio.

Field of vision is also incredibly narrow, as is the spread of fire – two things clearly intentional in order to keep battles balanced. Sadly though, Dead Star lacks balancing elsewhere. This isnâ€™t a shooter thatâ€™s constantly tense or thrilling, which is all down to the ebb and flow of battle being all over the place.

Itâ€™s forgivable that battles start as silently as The Force Awakensâ€™ finale – players are busy capturing bases and preparing for an all-out turf war. But more often than not the promise of large scale space battles is never fulfilled. Once bases are bolstered they become incredibly tough to take over, and so this isnâ€™t the kind of online shooter where a team will be winning by a huge lead one minute and then close to defeat the next. The team that bags the most bases early on always seems to win, no matter how many experienced players are on the opposing side. 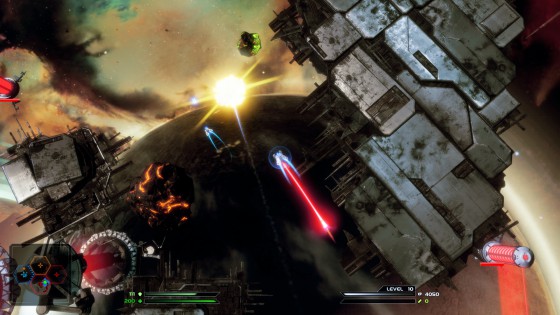 It certainly doesnâ€™t help that the matchmaking service has an irritating habit of placing newcomers in losing teams, in order to fill the slots left by those who have given up hope. Likewise, it doesnâ€™t assist matters that players donâ€™t seem keen to form strategies, despite voice chat and icon-driven communication being present. This isnâ€™t the developerâ€™s fault of course; itâ€™s down to players not working as a team.

Maybe over time Dead Star will attract a small cult following that will put the time and effort in, learning its nuances and playing it in a similar dedicated manner to other competitive shooters out there. It has clearly been designed for the long haul – the Escape Run mode, which promises big rewards, is yet to be made available. All signs point to the game’s future not just being in the hands of the developers but also the community. As of now, itâ€™s a slim but focused shooter thatâ€™s likely to drive players away due to severe limitations.