Bloody typical – you wait ten years for a new Star Fox game, only for two to turn up at once. Star Fox Zero and Star Fox Guard both launch on the eShop this Friday with a small discount in place.

Star Fox Zeroâ€™s regular price is Â£39.99 but can be had for Â£36.99 if Star Fox Guard purchased on the same Wii U. The price of Star Fox Guard – which started out as the E3 tech demo Project Guard – has been set at Â£12.99, or Â£9.99 to those who purchase Zero. So Â£46.99 for both. Only the first print edition – currently Â£49.99 at GAME – includes Guard, so that discount is decent enough. Or at least, is more than sufficient given digital pricing standards.

Weâ€™ll post a Star Fox Zero review round-up once scores go live. Expect it to arrive to a mixed reception – the motion controls canâ€™t be entirely disabled, and we all know how much critics hate giving something a fair chance.

For some unknown reason, a duo of Mario Party games are due via Wii U Virtual Console too. They are 2007â€™s Mario Party DS and 1999/2000â€™s Mario Party 2, at Â£8.99 each. Did You Know Gaming? took a look at the series over the weekend. Their informative video is well worth 7 minutes of your time. Weâ€™d completely forgotten about Mario Party 8 using the word â€˜spasticâ€™.

The only other new Wii U release for this week is the rose garden simulator Queens Garden (Â£5.49). â€œYou will cultivate a sea of bloom; fill the air with the breath of roses, from barren land to blossom – a sweet bouquet to royal nosesâ€ reads the blurb. 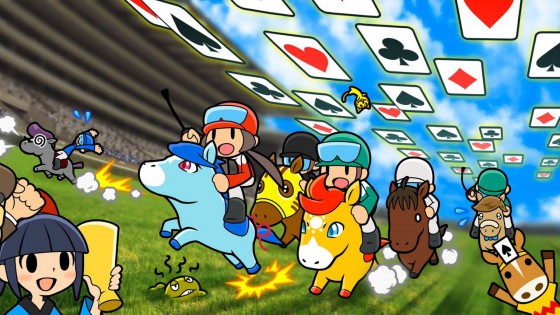 Over on 3DS the delightfully offbeat Pocket Card Jockey receives a demo. Solitaire-based horse racing – now thereâ€™s an idea only Nintendo could ever pull off. Thatâ€™s being joined by Dan McFox: Head Hunter, which is essentially children’s board game Guess Who with a few digital bells on, and the JRPG Langrisser Re:Incarnation-TENSEI- (Â£28.00). Part of the Growlanser series, Langrisser Re:Incarnation received a mauling from Japanese fans upon release. Dated visuals and poor enemy AI seem to be the main problems in a game thatâ€™s allegedly riddled with faults.

Keeping with the JRPG theme, one of the few 3DS discounts of note is Shin Megami Tensei IV dropping to Â£8.99 from Thursday. Itâ€™s the only 3DS discount of note, in fact.