Usually after spending a couple of hours with a new release you can begin to tell if itâ€™s a quality fare or a bit on the shoddy side. Current PS Plus freebie Shutshimi: Seriously Swole is a different kettle of fish altogether. After dipping in and out of over the past few evenings Iâ€™m still in two minds about it, hence why this is a â€˜Most Playedâ€™ rather than a review.

Judging by the aquatic aesthetics alone, I thought I was going to be into for a pleasingly nonsensical ‘shmup’ similar to Konamiâ€™s long-dormant Parodius series. Although there are some obvious similarities, it turns out it has more in common with Wario Ware.

The lead character is a fish, and as such has a ten second memory. The joke is this: each randomised wave lasts just ten seconds; a time-span so short that there’s barely enough time to kill all enemies on screen. Bosses meanwhile can only be beaten within 10 seconds if firepower is at full pelt – fail to do so and the battle simply resumes a wave or two later. 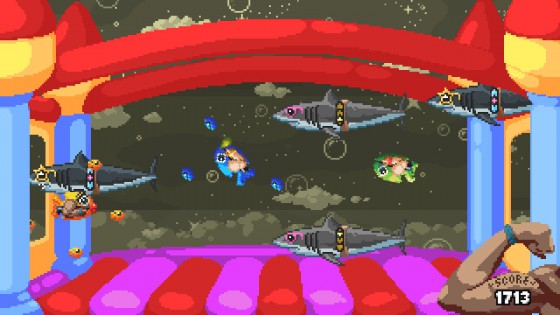 Once those precious ten seconds are up a shop appears. The same amount of time is given here to make a purchase, based upon the daft item descriptions alone. So incredibly daft, in fact, that to begin with itâ€™s a genuine case of picking one and hoping for the best. Thereâ€™s even a Trophy to be had for making 10 selections within two seconds of the shop appearing.

What we have here, then, is an incredibly randomised shooter. Waves feature inverted controls, wayward physics, flipped screens, psychedelic party scenes and even a bouncy castle stage. Items from the shop have both positive and negative effects too, varying from large and chunky bullets to slow-mo shots that take an eternity to reach the other side of the screen.

You may get lucky and have a decent assortment of goodies bestowed upon you – shields, hats, triple shots and more – or the complete opposite. Generally speaking, you need to play the game several in a row times until lady luck smiles upon you – an amount that can come round in mere minutes due to the one-hit-death system. 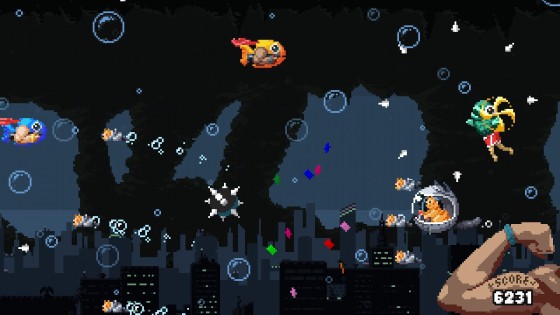 Like most, if not all, ‘shmups’ out there itâ€™s possible to become acquainted with the boss attack patterns and enemy movements over time. To begin with, I was barely able to make it beyond the tenth wave. After an evening or so or play though, I was starting to get well into double figures. Not on every attempt however – itâ€™s just a little too randomised for that, leading me to suspect that the odds are always against my favour.

I’m now at the point where I have to commit to a 30 minute session, just to heighten chances of getting a lucky streak of decent booty. Which is fine, I guess – itâ€™s easy to imagine that the average gaming session is way beyond half an hour these days.

Much like Choice Provisionsâ€™ own Woah Dave! before it, Shutshimi: Seriously Swole still makes for a decent PS Plus release – it’s the kind of thing thatâ€™s ideal for the platform, for want of a better word. Not substantial or deep enough to keep me away from the likes of Tom Clancyâ€™s The Division, but a decent enough diversion. Had I paid for it out my own pocket (Â£7.99 is the price for PS Plus non-subscribers) I may have felt a little short-changed – as focused as Shutshimi is, itâ€™s lacking in some areas – but as a freebie Iâ€™m perfectly content. Just donâ€™t ask me to apply a score to it.