Itâ€™s a quiet week for new releases, with only Dark Souls III and the new Nintendo Wii U Selects range arriving at retail. Has Dark Souls become a franchise so large that no other publisher dares to go up against it? Quite possibly, as there are very few new releases on the download services too.

Dark Souls III reviews went live late last week, with general consensus being that itâ€™s a fitting end to the trilogy that sees the series back on top form. â€œIf youâ€™ve never played the series, this is a great place to begin, offering a bit more direction in the early game before opening up. If youâ€™ve already played the series, you can feel confident that From Software hasnâ€™t lost its touchâ€ said GameInformer – one of the few sites to address how newcomers may find it. 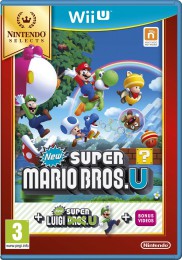 As those who follow us on Twitter may have noticed, weâ€™ve been keeping tabs on Wii U Select pre-order prices. Base.com currently has the range for a bargain Â£15.99 a piece. Some of the Wii Uâ€™s finest are included: New Super Mario Bros. U + New Super Luigi U, Zelda: The Wind Waker HD, Donkey Kong Country: Tropical Freeze, LEGO City Undercover, Nintendo Land and Wii Party U. Theyâ€™re also due a price drop in digital form, falling to Â£19.99 each on the eShop come Friday. Original pack-in Nintendo Land can be had for far less, and Wii Party U is an acquired taste, but the rest are essential. Don’t be surprised to see some of these reappear in the UK chart next week.

Over on Xbox One the 2D arcade-like puzzler Gear Gauntlet – which reminds us of Tatioâ€™s Cameltry – launches Friday for Â£7.99 while Blues and Bullets sees its long awaited second episode. We were starting think that the series had been cancelled; the first episode of neo-noir adventure launched last August. This second episode isnâ€™t showing the Xbox Oneâ€™s dash currently – it has to be purchased by launching the first episode. Incidentally, both episodes can be had for Â£6.39 via the Xbox site.

The only other new release for Xbox One is the Fallout 4: Wasteland Workshop DLC, which of course is also available on PS4 and PC. Donâ€™t expect to see many reviews – this Â£3.99 pack simply adds a bunch of new settlement items, plus the ability to trap creatures (and humans!) to make them fight for your own amusement. Thereâ€™s a video here showing off what’s new.

PS4 owners have a slightly wider selection of new games to choose from. Action RPG Stories: The Path of Destinies looks pretty neat while Risk of Rain offers online exploration in a 2D world. Feedback on Steam is positive for the latter, and from the looks of things Terraria fans will feel right at home. Then thereâ€™s Arcade Archives Ikki – a conversion of Sunsoftâ€™s top-down ninja action game from 1985. The product description informs that the only language option is Japanese, so weâ€™re guessing this one didnâ€™t see a western release. Blame the infamous market crash.

This leaves us with 2D brawler Skullgirls 2nd Encore on PS Vita, due out tomorrow (Thursday). We Got This Covered has given it the review treatment, resulting in a 4/5. â€œThere are some disappointing issues with the port graphically, especially with the text as it hurts the experience for newer players, but otherwise itâ€™s nearly perfect. Itâ€™s also the only way to play Skullgirls on the go, and those that pick it up wonâ€™t feel like theyâ€™re getting a stripped down experienceâ€ they said.