As those who played the PC/mobile original will no doubt testify, Letter Quest is bound to please anybody saddened by the fact that PopCap has seemingly forgotten all about their Bookworm Adventures series. This is the spiritual successor of sorts, effortlessly combining RPG elements with a combat system centred upon spelling. The longer the word, the more damage the opposition is dealt – simple yet effective.

As a mild warning though, the RPG elements present are incredibly light. Weâ€™re talking occasional appearance from merchants that sell health potions and other goods, perk-bestowing books that level-up through use, a choice of stat-boosting weapons and a few other fundamentals. The plot is certainly far removed from the usual world-saving quests that RPGs are renowned for. To wit: pint-sized reaper Grimm is simply out to collect a late night snack from his local takeaway. This so happens to take the peckish protagonist across graveyards, forests and tombs, battling ghouls and other supernatural beings along the way. 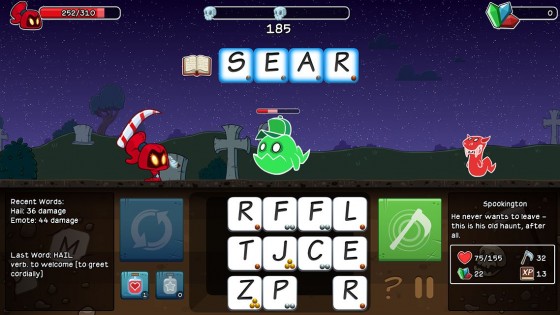 If solely persevered as an RPG, then, Letter Quest is basic to the extreme. Thankfully for all involved, the word-based battle system – the gameâ€™s centre piece – is incredibly robust. The mobile roots are however visible; itâ€™s presented in a similar manner to the vast majority of mobile games out there, while each bite sized stage involves just three or four confrontations. Youâ€™d think this would prevent Letter Quest from being ideally suited to extended play sessions, but this isnâ€™t the case – we found ourselves putting in a couple of hours at a time.

Donâ€™t mistake this for a kids’ game

Grimmâ€™s adventure is a linear one; thereâ€™s no control over the central spook whatsoever. He (or she – a female lead is available) casually strolls to the right stopping to battle each and every enemy, while occasionally coming across treasure chests that open after solving a hidden word puzzle. As such, it falls onto the battles themselves to induce variety. Slowly but surely new tile types are introduced into the 5×3 letter grid occupying the bottom half of the screen. Poison tiles damage Grimm when used, and so are best avoided if possible. Then come duplicator tiles which will fill the grid with identical letters if you arenâ€™t careful. Plague tiles spread if they arenâ€™t used quickly, while some enemies have the ability to crack tiles so that they no longer cause damage. Slightly less taxing: flipped tiles, which simply flip a tile around in a vain attempt to confuse.

Ultimately, itâ€™s the smoothness of the difficulty level that really excels. Thereâ€™s no time-limit to input words, which we imagine was a difficult choice for the design team to make. By letting the player have as long as they like to find the longest word possible some potential challenge is obviously lost. The upshot is that this is something everybody can enjoy, while the vibe is slightly more relaxed. Youâ€™ll often find yourself trying to find longer words than what youâ€™ve already found, extending your lexicon in the process. Incidentally, a brief definition of each word also appears on screen, sneaking in some educational value. 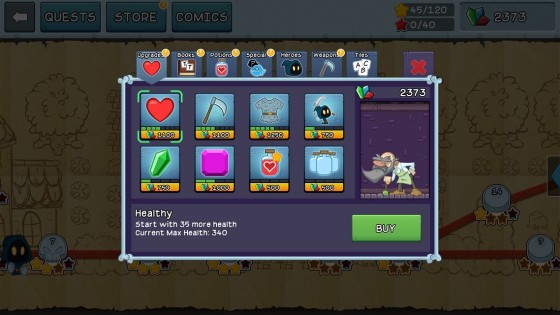 Donâ€™t mistake this for a kids’ game, though. That smooth difficulty curve does naturally rise. Along come enemies that can only be damaged by words that start with vowels, or corner tiles. Later enemies pack a bigger wallop too, but (hopefully) by this point Grimmâ€™s health bar will have grown in size – one of the many upgrades found in the shop. We did however want for a few more â€˜curveballsâ€™ towards the end – itâ€™s quite hard to tell one stage apart from the next due to lack variety in the backdrops, while the music rarely changes. That said, most of the tunes – new to this remaster, we might add – are pretty good, and donâ€™t distract too much from trying to find that perfect 8 letter critical blow.

The only other thing we would have wished for is a save feature for the less-explanatory Endless Mode. Forty minutes into one session and our presence was required elsewhere, but with no option other than to hit the exit button we lost all progress. Maybe developers Bacon Bandit Games didnâ€™t think people would last for longer than 30 minutes? What we do know is this: Letter Quest is a decent word game; the kind that is seldom seen on consoles. Backed by a low entry price, even those with a passing fancy would do well to take a look.