Those saddened by fact that weâ€™ll probably never see another Marvel vs. Capcom should sit up and pay attention; Nitroplus Blasters has a tag-team battle system thatâ€™s rather similar. Thereâ€™s an obvious caveat to overcome first though – the cast of characters in this 2D beatâ€™em up mostly originate from import-only Japanese titles, and as such will be unknown to most. Having said that, one character has an assortment of web-swinging attacks to rival Capcomâ€™s rendition of Spider-Man while a support characters lets loose a screen-filling Cyclops-style beam blast. Whether these moves and characters are intended to pay homage to MvC, or are merely coincidental, is hard to say.

If it wasn’t clear by name alone, all 32 characters in Nitroplus Blasterz are female. Some clutch weapons (swords, chainsaws, mallets and…a giant hovering crucifix) while others rely on their fists and feet. Another girl attacks using what can only be described as bile which erupts from her body. Lovely. Itâ€™s our understanding that only one character is a unique creation – Sonico, who calls upon her feline friends to scratch and bite the opposition – with the rest coming from such games as Psycho-Pass, Arcana Heart, Fate/Zero and Senran Kagura. Not all 32 characters are playable, we should add, as the vast majority are support characters. When called upon theyâ€™ll perform some kind of outlandish attack before swiftly vanishing until they can be used again. Two can be chosen to go into battle, with some having â€˜synergyâ€™ with your chosen femme fatale. 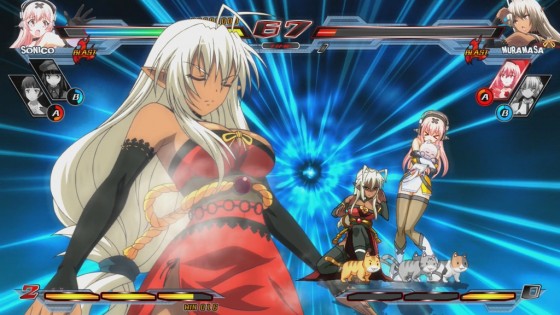 The five-button fighting system is very easy to get to grips with. So much so that there isnâ€™t even a proper tutorial; just a training mode that displays a list of commands. Infinite Blasts cause fire to erupt across the screen and push the opposition back, Variable Rushes require some good old button bashing to bring the hit counter into double figures while Lethal Blazes are screen-filling special attacks which can often notch up 50+ hits in a jiffy. Playing through the first part of the story mode a few times – a seven staged affair, ending with an obligatory boss battle – and chances are youâ€™ll begin to understand why there isnâ€™t a tutorial. Most of the basics can be self-taught.

a rather clean-cut package

As loosely suggested, the story mode is a two-parter. Part one is your typical arcade mode, while part two is far more text heavy. Alarmingly text heavy, in fact. Not only can text be skipped however, but also the battles themselves. A curious decision which is presumably there for those who just want to take in the story – a tale that links back to the developerâ€™s own Demonbane series. Skip through the text and play on the lowest difficulty setting and the story mode can easily be beaten in under an hour. This isnâ€™t the best, or most rewarding, way to experience things of course.

Other modes are relatively few in number, giving the impression that the developers focused solely on making sure the fighting mechanics were up to scratch rather than bulking the package up with pointless content. BlazBlue: Chrono Phantasma EXTEND, weâ€™re looking at you here. In comparison, this is a rather clean-cut package consisting of the aforementioned story modes, a score attack mode, a gallery and online play. 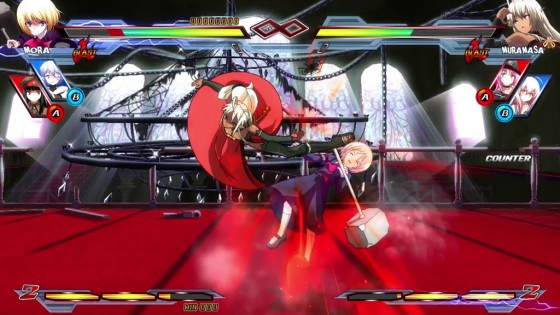 Obviously, the chance to fight others online holds the most lasting appeal. Presentation in the lobbies is a little dated (Nitroplus Blasterz is available on both PS3 and PS4, incidentally) and the means of finding a match are a little unorthodox. You can search for incredibly specific match types – right down to certain support characters only – or join/create a room and patiently wait your turn, practising in the training mode to pass the time. Despite Nitroplus Blasterz launching in the US back in February though, the lobbies are often quiet and having to wait a while for a match isnâ€™t uncommon.

This is something of a curious package, then. A colourful and hyperactive brawler thatâ€™s easily accessible to all, yet features a cast of characters that very few will have heard of. Like venturing to somewhere new or unfamiliar, prepare for a bump or two along the way.