Now hereâ€™s a game thatâ€™s tricky to write about. Not so much in regards of the combat system and such, but rather the subject matter.

Weâ€™re sure Senran Kagura fans are rolling their eyes right now, having heard this all before, but it has to be said that the series errs on the perverse side. Seductive poses, gratuitous cleavage shots, deeply unrealistic â€˜jiggleâ€™ physics and very suggestive themes – it must have gained its 16+ age rating by the skin of its teeth.

Due to the comic timing of many situations the girls find themselves in though, it often comes across as more stupid than sleazy. Certainly far from arousing. We dare say it even made us crack a wry grin a few times due to sheer the daftness of it all. A good example: one battle ends with a trio of the lesser liked girls flying through the air, all three landing bent over the branches of a large tree with their buttocks pointing upwards. If just one girl landed like this it would be perverse, but because it happens to all three itâ€™s just…daft. 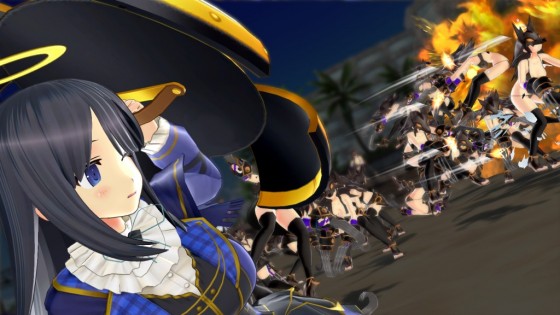 The same goes for the frequently occurring Shinobi transformation animations in which the girls pull out ninja scrolls from suggestive places – including from their behinds and between their bosoms – while their bare skin becomes clad with their Shinobi attire. Cut-scenes showing the girl’s clothing becoming tattered and torn from battle are equally frequent. Also: a little unsettling. Everything else shouldnâ€™t be taken at face value.

Indeed, thereâ€™s a very light-hearted vibe present – Senran Kagura Estival Versus doesnâ€™t take itself seriously in the slightest. Although weâ€™re unfamiliar with the previous games in the series itâ€™s clear by premise alone that this is one for the fans. The girls find themselves transported to a Shinobi festival set in a sun-drenched parallel realm. Here, lost loved ones and former rivals are still alive and kicking. Itâ€™s a ruse by the developer to bring back characters from past games, pretty much.

Missions in the story mode have names like Undie Eating Contest and The Grand Grope â€˜nâ€™ Grapple. It sounds like the perfect set-up for a nonsensical mini-game collection to rival the almighty Bishi Bashi Special, but no – this brawler takes inspiration from the Dynasty Warriors series, only on a much smaller scale. 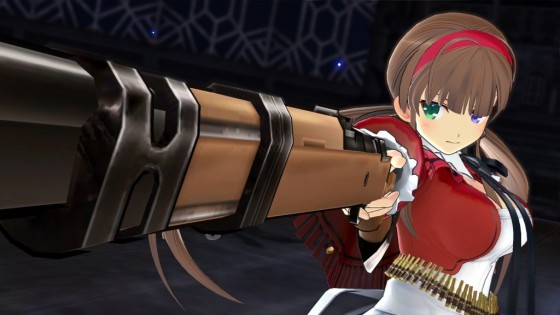 Battles take place in invisible-walled locations – including beaches, forests, neon-hued city blocks, football stadiums and dojos – and last around five minutes each. Usually the girls are pitted against a crowd of identical enemies that can barely muster up courage to attack or retaliate, and then a boss appears.

Enemy grunts can be button bashed into oblivion, but when taking on bosses you may need to occasionally block and perform counter attacks to succeed. The emphasis there is on the word occasionally – the default difficulty level is very easy going.

The character roster seemingly goes on forever, with each female fighter clutching a different weapon and having their own array of combos and attacks. Experimenting and becoming acquainted with each plays a key part in the gameâ€™s depth. Itâ€™s within the character design that the game really shines though, giving good incentive to keep playing in order to see whoâ€™s next on the agenda.

Notable highlights include a blonde girl who attacks using water guns while riding around on a magical talking dolphin, and a tech-savvy female who’s accompanied by a robot that looms over her tiny shoulders. New combos unlock by leveling up characters, while the special attacks are largely entertaining to watch. This is especially the case for the youngster who fights using giant spatulas while flipping pancakes. We canâ€™t recall any of the girlâ€™s names. Sorry. 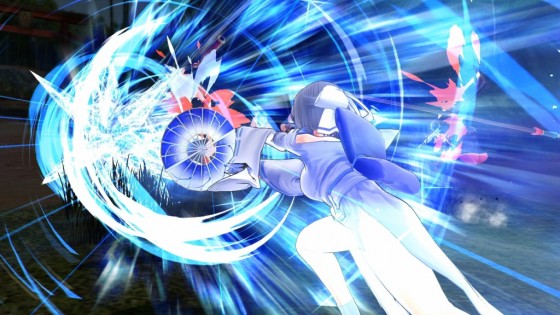 Although the story mode grows repetitive towards the end, other modes are present including a wealth of online match types. These include, we kid you not, a Capture the Bra mode. Most of the other online modes entail fighting off waves of enemies while protecting shrines. We managed to find other human players with relative ease.

AI controlled cohorts can be called upon to fill vacant slots too, although they’re a bit on the dumb side. Despite the ability to run up walls, we often observed them constantly running into buildings and such in a futile attempt to reach the enemy on the other side. Nevertheless, the online modes help the package to feel whole. If it wasnâ€™t for them, youâ€™d be left with a few special missions, the interactive dressing room – in which five girls can be dressed and paraded at once – and not much else.

Senran Kagura Estival Versus is one for the fans, then; a game with niche appeal. Outsiders looking in may rightfully feel rather confused by its very existence. After spending time with it though it does become clear why it has a cult following, and we arenâ€™t talking about its more titillating moments.