WayForward has developed many mediocre games over the years, yet they remain one of our favourite studios. Itâ€™s their quick turnaround TV/movie tie-ins that prevent the company from having a glowing track record, and this is something entirely forgivable – all work on licensed tat helps to fund their own IPs. If it wasnâ€™t for publishers giving them licensed games to produce, chances are they wouldnâ€™t be able to carry on releasing the likes of Mighty Switch Force, Shantae and other self-published games.

The first Shantae wasnâ€™t self-published however – Capcom released the Game Boy Color original late in the systemâ€™s life, leading it to become one of the hardest GBC games to track down. Since then Shantae games have appeared on half-a-dozen formats, with this – the third in the series – being the first to land on Xbox. Although the story references events past, entailing Shantae teaming up with a former nemesis to disrupt the plans of an undead pirate, newcomers shouldnâ€™t feel too out of the loop.

Weâ€™re in deep â€˜Metroidvaniaâ€™ territory here, with Castlevania providing the bulk of inspiration rather than Metroid. This is partly down to Shantae using her purple ponytail as a whip, gaining upgrades along the way to make it faster and more powerful. And whatâ€™s used to upgrade her hair? Shampoo, of course. 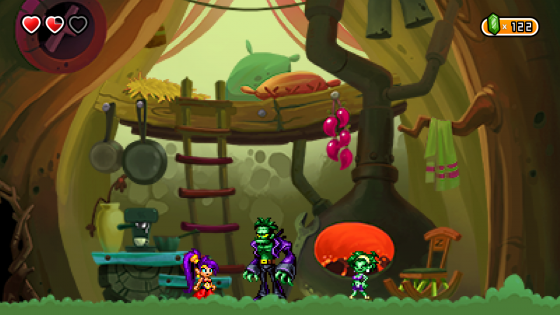 Structurally it has more in common with Zelda than either Metroid or Castlevania. Shantae and her ex-rival Risky head to five different islands, solving puzzles, helping the hapless locals and navigating labyrinths to defeat the bosses within. The labyrinths are very Zelda-like in-design, viewed from a side-on perspective a la Zelda II, complete with all the usual tropes – locked doors, chests containing maps and keys and a boss that has to be defeated using a skill acquired en route.

Although the labyrinths rarely live up to that namesake, being relatively small in size, there are a couple of instances where using the map is vital to progress. The difficulty level notably rises after the third island, putting the focus on pixel-perfect jumping rather than puzzle solving. Acute reflexes and a good sense of timing come in very handy indeed towards the end of the adventure.

Boss difficulty meanwhile is the right side of challenging throughout, dependant on memorising attack patterns. Replay value is linked to boss battles, in fact – there are achievements for beating each without taking a single hit. 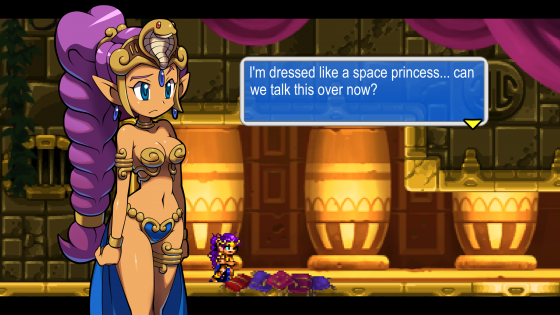 Accessing a labyrinth isnâ€™t as straightforward as simply walking through the oversized entrance. Usually an item of some sort is required, and it isnâ€™t always obvious which. Most islands have to be revisited at least once, using new skills to access a previously unreachable area to gain an item of importance.

Gaining access to one labyrinth in particular had us flummoxed for a good half-an-hour or so due to lack of even a cryptic clue. Coupled with the omission of an auto-save feature, Shantae and the Pirateâ€™s Curse does comes across as being a little too â€˜old skoolâ€™ for its own good at times. We canâ€™t stress enough how important it is to re-visit save points at every chance. We foolishly went from one island to the next without saving, forcing us to endure the previous boss again after we snuffed it.

If in doubt, head back to Scuttle Town. This opening location acts as a central hub, complete with an item shop and a small outdoor area in which itâ€™s possible to grind for gems. The blacksmith can also be found in town – bring her four squid hearts, and sheâ€™ll extend Shantaeâ€™s health bar. Itâ€™s a good idea to visit the item shop regularly too as itâ€™s the only place health potions can be found. Theyâ€™re cheap and a dozen can be carried at once. An ample supply can make a huge difference in the overall difficulty, making bosses far easier to defeat and providing plenty of chances to perfect those aforementioned tricky platforming sections. Weâ€™d even go as far as saying that these potions allow the game to be enjoyed by all and sundry. 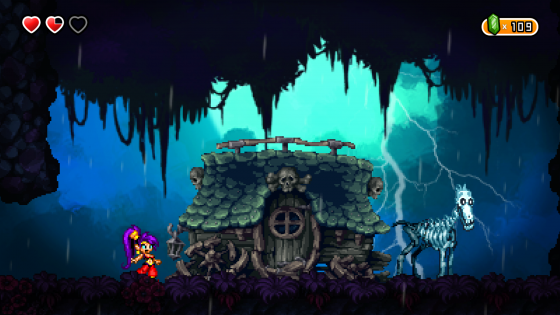 Those weaned on the likes of Symphony of the Night and Super Metroid will doubtlessly find solace in beating the bosses without resorting to potions and power-boosting consumables, safe in the knowledge that there always there should they be required.

By now it should be clear that Shantae and the Pirateâ€™s Curse is a well-conceived amalgam of Metroid, Castlevania and more. To elaborate: there are shades of Super Mario World and WayForwardâ€™s own DuckTales Remastered present too. Never does it feel like a mere rip-off of those games however – with a likeable lead, inventive boss battles, impeccable pixel art and some pleasingly daft dialogue (pop culture references ahoy!) it has enough unique ideas and twists to stand proudly on its own feet.