Games with an environmental theme were rife in the â€˜90s. We can probably attribute this to the runaway success of Captain Planet, which too had its own obligatory video game tie-in. After a lengthy hiatus, not one but two games centred upon saving â€˜Mother Earthâ€™ arrived within the same week – colourful tower-defence shooter McDroid and this PS4 auto-runner from Mexican studio EnsenaSoft.

MOP: Operation Cleanup is rather peculiar, but in a good way. MOP – a small robot who spouts pleasingly nonsensical gibberish – automatically runs to the right, with his only method of attack being to jump on the heads of the trash-covered mutants he comes across. The majority of enemies are stationary, and so a good sense of timing and decent reflexes are required – time a jump incorrectly and youâ€™ll often end up taking a hit. The same goes for leaping over pools of toxic goo, which remind us of the purple gunk from Sonic the Hedgehog 2â€™s Chemical Plant. 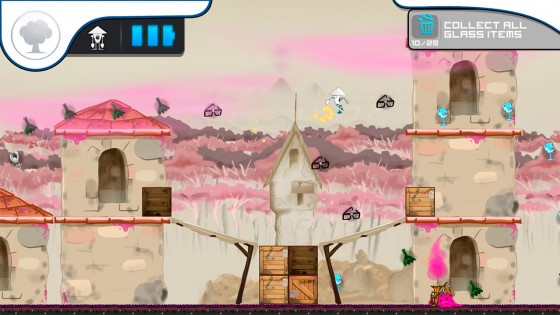 rather peculiar, but in a good way

Every world has ten stages, complete with a small list of optional objectives. Kill X amount of enemies, collect Y amount of trash, finish a stage without taking a hit and such. By far the toughest of these involves collecting all pieces of trash within a level, as the amount soon rises into triple figures.

Thankfully most levels are relatively small, and so the memory of an elephant isnâ€™t required. The magnet power-up proves immeasurably helpful, too, and can be frequently found. Once the sense of timing has been licked itâ€™s entirely possible to complete one or two of the challenges on the first run, which can feel rather satisfying.

Now hereâ€™s the twist – by double jumping off walls, MOP can turn himself around and backtrack. This not only allows you to mop up any missed items and enemies, but it’s occasionally vital in reaching the exit. 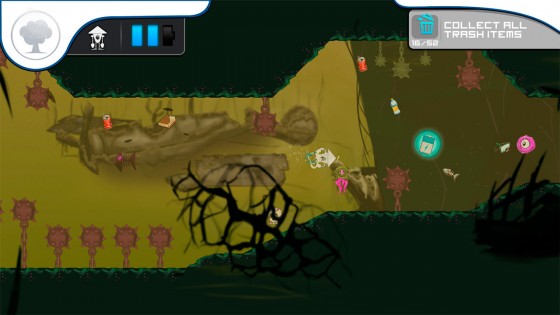 Annoyingly though, only some walls can be double jumped off. Try and leap back off a vehicle or similar and MOP will spaz out for a second or two before carrying on his journey. This give the game a little bit of a rough edge, despite being far more accomplished than EnsenaSoftâ€™s first game – Miko Mole. The 2D images are sharp and nicely drawn, while the backdrops and assortment of enemies changes from one world to the next. World three meanwhile introduces underwater sections which help induce variety, although they do up the frustration level due to irksome controls.

Even though it has put together in a competent enough fashion, itâ€™s still hard to recommend MOP: Operation Cleanup over the likes of Rayman Legends. If youâ€™re after something that simply provides an afternoonâ€™s worth of light-hearted entertainment however, MOP will at least suffice for that.