Miko Mole has been likened to such classics as Dig Dug, Boulder Dash and Pac-Man. While not entirely illogical comparisons, itâ€™s a bit like comparing The Beano to 2000 AD, or ChuckleVision to Ricky Gervaisâ€™ Extras – the mediums are the same but all other similarities are merely fleeting.

This was the first console release from Mexican studio EnsenaSoft, a small team looking to break away from casual mobile titles. After launching in the US late last year, itâ€™s now available on the EU PSN store along with their second title MOP: Operation Cleanup.

A new beginning, yet the developerâ€™s roots remain visible – both look and feel like mobile games. Resolution aside, Miko Mole has visuals that would make the humble PSone blush, in some places even resembling a Net Yaroze homebrew title. Texture work is the biggest offender – the deformable terrain is coated with crude textures stretched so thinly that all detail is entirely lost. 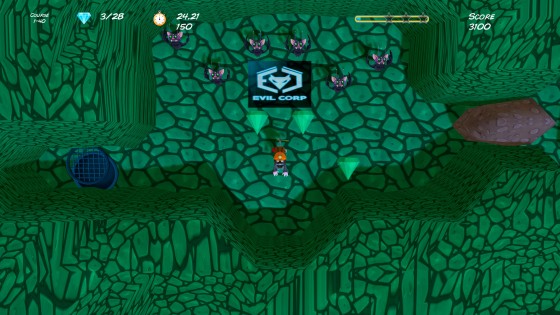 the first worldâ€™s garish colour palette does it no favours

The premise is sound enough, though. Dig through dirt to collect diamonds while dashing to an exit, dropping boulders onto enemies along the way. Not all diamonds have to be collected however, and there are many instances where enemies (bats, mostly) must simply be avoided.

This brings us onto the first problem: the dim-witted AI. Unless mistaken, the enemies are simply programmed to move in a straight line, changing direction only upon hitting a solid object. Theyâ€™re often observed stuck in tunnels and such, moving in every direction until eventually finding their way out by sheer luck. Irritatingly, this will sometimes include tunnels located on the way to the exit. If there are no boulders or deformable terrain nearby, all you can do is wait and kiss the ‘speed bonus’ goodbye.

The second, and most frustrating, problem lies within the boulder physics. Touch one and the wonky physics engine kicks in, which works thusly: if Miko is beside the boulder it can be pushed, but if heâ€™s under it itâ€™ll kill the hapless hero. It only takes the smallest of nudges for a boulder to roll over poor Miko, killing him instantly due to one-hit-deaths.

Amazingly, it gets worse. Boulders only vanish when hitting an enemy and so occasionally the path to the exit will end up being blocked by a bunch jammed together. 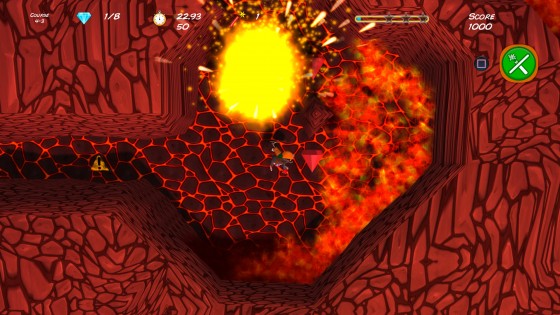 Things do eventually improve…but very slowly. This is a surprisingly lengthy game – six worlds with 40 levels, each with different backdrops and their own smooth jazz soundtrack. So, 240 levels in total and a whole lot of sax. Every world introduces something new, including dynamite that can remove solid walls and puzzles involving a new found ability to grab objects and place them on pressure pads. Why this skill isn’t available from the outset is a mystery – it can be used to move stray boulders, and as such would have made the earlier worlds less frustrating.

Fortunately it’s possible to tackle levels at freewill – even the grand finale, if you really wanted – which of course lets you skip ahead to get to the more involving stages. The later levels look a little better too; the first worldâ€™s garish colour palette does it no favours.

Ideally then, the developers would have been better off investing time in making sure the fundamentals worked rather than bulking the game up with a surprisingly large level quota. A slimmer, more refined, experience would have made those self-proclaimed comparisons more accurate.