Itâ€™s perfectly acceptable for a game to be simplistic. The likes of Tetris, Space Invaders and Pac-Man are timeless classics one and all, despite their basic nature. Nnoooâ€™s Blast â€˜Em Bunnies takes one of the most basic ideas around – first-person turret shooting, as briefly seen in just about every FPS ever made – and attempts to make a comprehensive gaming experience out of it.

Unlike the aforementioned classics however, Blast â€˜Em Bunnies isnâ€™t particularly nuanced. There are a few rudiments in place, such as keeping an eye on the radar and preventing the turret from overheating, and thatâ€™s about it. Quite simply, random waves of evil bunnies make a beeline towards your rotating cannon, manned by a nameless bunny dressed in a rather ill-fitting orange T-shirt. If the evil bunnies reach the cannon youâ€™ll take a hit, with three hearts being the default. 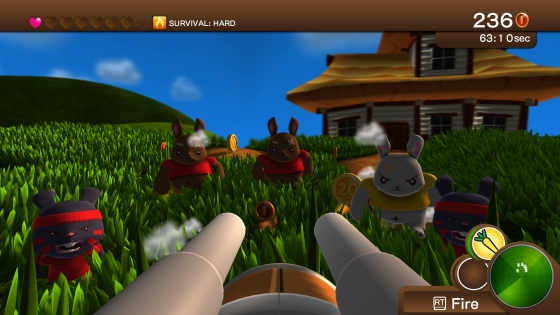 Every bunny type has its own movement and attack patterns – which take almost no time at all to learn – while weapon power-ups include runner bean lasers, turnip mortars, pumpkin bombs and half-a-dozen more. This isnâ€™t the kind of shooter where some weapons are better against certain enemy types however – some just have slighter faster rates of fire or homing abilities. Chances of survival can actually be hampered by accidentally picking up one of the weaker weapons, such as the watermelon pip shooter.

Boss battles against colossal bunnies feature now and then, and are one of the few instances that prevent tedium from settling. The only other distraction comes in the form of an elusive golden bunny who oddly resembles a certain speedy hedgehog. Take him down and frenzy mode activates, temporarily increasing firepower. This gives a glimpse at what the starter cannon can potentially come if you put some time and effort in to save up the required cash. 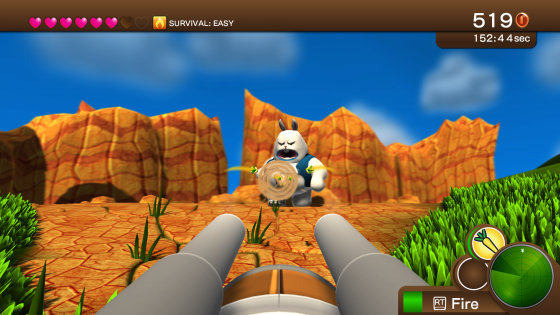 It almost comes across as some weird experiment

This is the focal point; collecting coins to buy upgrades. Every bunny drops coins after being killed, which then have to be blasted to collect. Bigger payouts can also be bagged by completing challenges, like killing a certain number of a single enemy type or by saving baby bunnies from (parents beware!) murderous â€˜throat slitterâ€™ bunnies.

With every upgrade – extra hearts, new ammo types, additional barrels and alternative cannons – chances of survival increase. Or to be more precise, youâ€™ll find yourself able to last for longer in the Survival Mode; one of just two modes. The other is a two-minute score chaser with optional invincibility. Thereâ€™s a tutorial too, incidentally, but whether it was required is debateable.

The structure is similar to a mobile game, then. Halfbrickâ€™s Fruit Ninja is a reasonable comparison – every match is randomised, so you may get lucky and receive a decent assortment of power-ups, or if luck isnâ€™t on your side you may end up lumbered with a poor selection. Regardless of luck though, losing all remaining hearts in one fell swoop isnâ€™t uncommon. We often felt the wrath of being hit by three or four bombs at once or having a squadron of the flying rabbits take us by surprise. In these situations it felt like taking a hit was completely unavoidable. 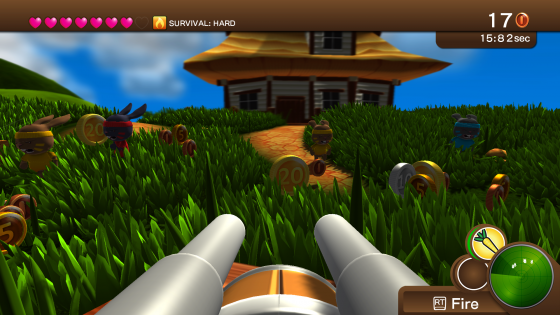 Another major issue is that in terms of content the default package (Â£3.99 on Xbox One and PS4) is incredibly slim. To wit: just one backdrop (a dusty canyon) and the standard assortment of bunnies. All additional content, such as the zombie skin pack, has to be paid for. Over twenty different pieces of DLC arrived on launch day – an absurd amount. It almost comes across as some weird experiment by the publisher just to see if people are actually willing to spend extra money on a few daft add-ons.

Ignoring the fact that the visuals arenâ€™t entirely without merit – thereâ€™s a day and night cycle, and the bunnies are smoothly rendered – Blast â€˜Em Bunnies is simplistic to the point of feeling remarkably out of place on a console. We canâ€™t vouch for the 3DS and PS Vita versions, not having played them, but canâ€™t help to think that Nnooo would have reaped bigger rewards – both critically and financially – had this been a mobile release.