Survival games are both high in demand and in number at the moment. If youâ€™ve played the majority, then youâ€™ve probably noticed that they donâ€™t tend to be storyline orientated. Usually they begin by explaining the premise – zombie apocalypse/nuclear devastation/popping to the supermarket on Black Friday – and youâ€™re then left to your own devices.

The Solus Project is different from most survival games in the sense that a storyline unfolds while out scavenging for supplies. Itâ€™s a first-person affair set in the far flung future – Earth has been destroyed and so mankind has taken to the stars in huge, self-sustainable, spacecraft.

The titular project is a last ditch effort to find a new planet for the human race to call home – a 15 year mission that sees three sizeable spacecraft out to explore the vast unknown. Indeed, recent flick The Martian seemingly provides a degree of inspiration. 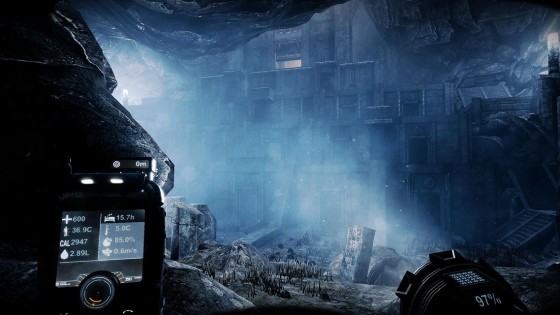 After being hit by a projectile while orbiting a planet, one of these ships ends up being torn to shreds. A single escape pod manages to evade the blast radius before crash landing on the mysterious world below. As luck would have it, the planet has running water, edible plants and other carbon-based lifeforms – everything required for mankindâ€™s survival. If only there was a way to broadcast this civilization-saving discovery.

Events unfold right at the foot of the crashed escape pod, introducing crafting mechanics and the PDA system that monitors vitals. The first craftable item is rather symbolic – by bashing two rocks together, a sharp blade can be formed. Here we are in the space year 2183, yet forced to go back to our caveman roots. Inventory management plays a sizeable part as only a handful of items can be carried at once. Soon though a bigger backpack is recovered from the spacecraftâ€™s wreckage, along with tins of food and other items such as stat-boosting artefacts. 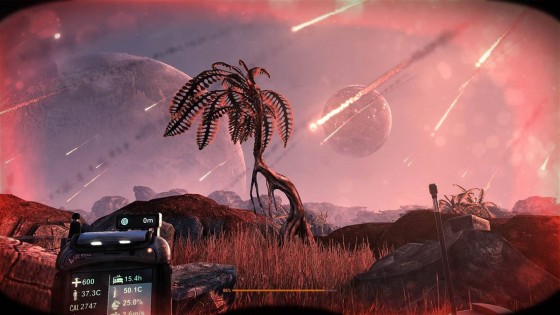 The crafting system is pleasingly logical – metal pipes can be stuffed with dry roots and then doused with oil to create torches, while tins of food have to be bashed open before consumption. Ring-pull cans were presumably banned before Earth was destroyed.

While exploring the crimson hued surroundings – which vary from picturesque shorelines to caves with mysterious relics – new waypoint beacons appear, thus giving something to focus on while preventing aimless wandering.

Itâ€™s when these markers are reached that the story, ergo the mysteries surrounding the planet, unravel. The voice acting is generally good, with the purposely muffled radio transmissions and the protagonistsâ€™ inner monologues providing narrative. Documents can be found amongst the wreckage too, giving insight to the The Solus Project itself as well as survival tips.

Survival is a (relatively) simple case of keeping warm during nightfall, sleeping regularly, avoiding heatstroke and ensuring the intrepid hero is well fed and hydrated. The PDA can be used to scan objects to discover if theyâ€™re safe for consumption, so there are no nasty consequences for tucking into the alien fauna and pluna. The PDA also gives a heads up about radical changes in weather conditions – early on in a raging tornado hits the shoreline, prompting the sea level to rise in a realistic manner. Ideas like this help the planet to seem both alive and hostile. 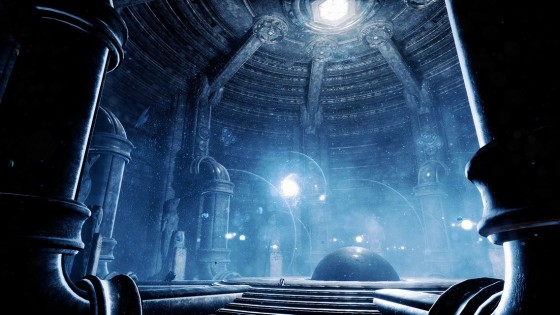 Arguably what The Solus Project excels at most is planting seeds of thought, giving plenty to mull over while exploring. Foremostly, as to whether you are alone on the planet and if combat will eventually come into play. The planet was once inhabited by somebody, or something. That much is clear.

Currently The Solus Project is available as an Early Access release on Xbox One and PC, with plans to new segments (read: episodes) over time. From what weâ€™ve played and seen in part one, graphical glitches are the only cause for concern – the core experience is resoundingly solid, and isnâ€™t in need of any major refinement. How many Early Access games can you say that about? Not many, we bet.