Nothing makes us gnash our teeth more than reading peopleâ€™s negative reactions to the monthly Games with Gold and PS Plus announcements. Our biggest bugbear is when people use the term â€œindie crapâ€ whenever the smaller, arcade-like, indie games are up for grabs. MS and Sony really canâ€™t win as on the occasions when full-price retail releases are available for sweet nothing theyâ€™re often described as either â€œcrapâ€ or â€œoldâ€.

â€œHad this game already and traded it inâ€ provokes teeth grinding too. What are we meant to say in response to that, exactly?

Xbox owners in particular seem to forget that Games with Gold is intended to introduce new experiences to less seasoned gamers, building a back-catalogue of hits and classics along the way. We totally approve of this ethos – as long-term Games Asylum readers will know, nothing pleases us more than coming across a hidden gem. Games with Gold provided a corker this month – Hand of Fate, which despite the glowing reception weâ€™d eluded until now. Blame the slightly steep Â£15.99 price tag and us being cheapskates. 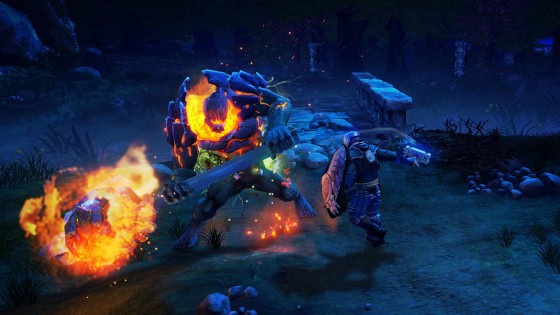 Hand of Fate is a role-player, but not in the traditional sense. Actually, thatâ€™s a lie – itâ€™s very much traditional, taking the form of a card-based tabletop game similar to Dungeons & Dragons. Cards are dealt at random by the dealer – featuring equipment, enemy encounters, blessings, curses and more – and placed accordingly on the table. The layout forms a dungeon floor (for want of a better description) and for every move a piece of food is consumed, while health slowly regenerates. Food and gold are the two resources picked up along the way; fail to keep a decent supply of foodstuff and the health bar will take a hit.

Encounter cards see you dealing with the devil, rescuing maidens, fighting off thieving Golden Axe-style goblins and placing you in dozens of other likeminded instances. A strong and vivid imagination is required throughout as only a small illustration is shown per encounter, battles aside.

The deck is small to begin with, as is each dungeon. At the end of each game – either by defeat or success – new cards are added to the deck. Some cards are gained simply through progression while others require encounters to be completed. This is a feat achieved by picking the right response to a situation, handing over spoils to the less fortunate or defeating certain enemies. 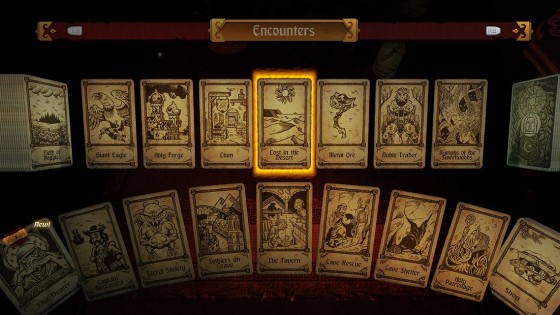 Itâ€™s during combat that skill is required rather than luck, as each battle takes place in real-time. Itâ€™s fast-paced, crunchy and just the right side of chaotic – if lady luck isnâ€™t on your side, you can end up facing as many as 12 enemies as once. The Batman: Arkham series provides an unlikely influence, complete with colour-coded icons showing when to counter and evade. Time strikes perfectly and itâ€™s entirely possible to go several battles without taking a single hit. As you can probably imagine, this is immensely satisfying.

Like the gameâ€™s name suggests, everything else is up to fate. Well, kind of – it is possible to manage your own deck, removing the cards that tend to end in messy circumstances. Therein lies part of the gameâ€™s depth, as it isnâ€™t until youâ€™ve run into trouble and been scoffed at by the dealer that you learn which cards to pick and which encounters to try and avoid. The more you play and adapt, the higher the chances of beating the dealer in the final showdown.

The dealer is something of a pompous arse, criticising choices and even going as far to claim that some blessings are â€œfar too good for the likes of youâ€. Only occasionally does he provide words of encouragement or congratulate on success, and even then itâ€™s usually in a sarcastic tone. After taking out his legions of ratmen, lizard folk and reanimated skeletons, the dealer puts himself forward for the final confrontation. 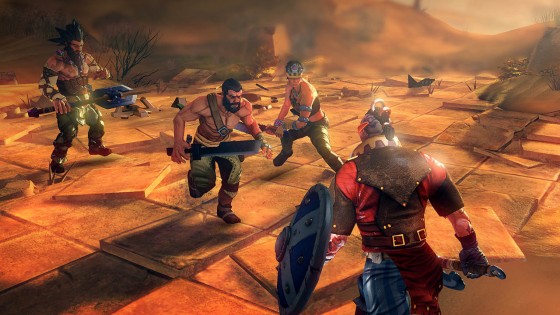 This is where you have to put everything youâ€™ve learned and gained so far into effect – the final battle is one of the toughest in recent memory. Indeed, if anybody has taken on the dealer and beaten him on their first attempt weâ€™d be very surprised. By adding certain weapons and equipment to the deck it is possible to turn the odds in your favour slightly. We recommend the giant War Hammer (or Huge Hammer), the Immovable Object suit of armour and the Hernes Antlers helmet, which does double damage to lizardmen. As for rings, the Ring of Justice, Occult Ring and Veteran’s Ring all prove useful. By removing weaker weapons from the deck and filling empty slots with artefacts and shields chances improve of compiling the ideal set.

Alternatively, you can cheat. The Midas Appetite curse causes the hero to consume gold instead of food. When combined with the Emergency Ring, which bestows a free resurrection at the cost of all your food, you become invincible. Think of it not as a glitch, but as an oversight of the developer. Gaining this curse and unlocking the Emergency Ring requires both luck and preparation though – curses are handed out randomly, while the Emergency Ring is only gained by completing the third Blood Auction event. Chances are by this point youâ€™ll be very well-versed with the game, and have probably dabbled with the self-explanatory Endless Mode too.

In terms of worth, at least in the economical sense, Assassinâ€™s Creed: Black Flag and Tomb Raider: Definitive Edition are still the best Games with Gold freebies weâ€™ve seen so far. In terms of actual value however, Hand of Fate reigns above all.