Unravel is an enticing proposition – a potentially glorious combination of EAâ€™s big-budget production values and Coldwood Interactive’s burning desire to share a heartfelt tale with the rest of the world.

EA has definitely fulfilled their role. Unravel is a thing of beauty, with every inch of its Scandinavian countryside as richly detailed as the last. Very few assets are recycled, if any at all, which in turn gives Unravel a wonderfully organic look. Branches and flowers sway in the wind, the picturesque backdrops roll for miles and occasionally youâ€™ll catch a glimpse of wildlife, be it a small harmless spider altered to Yarnyâ€™s presence or herds of elk grazing in fields beyond.

Like the modern day works of Disney-Pixar, itâ€™s bound to withstand the test of time. 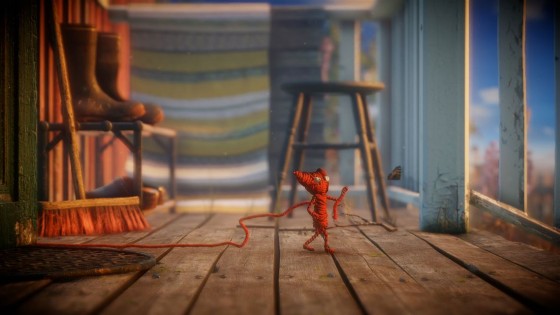 Yarny – our crimson hued hero, out to retrieve eight missing handcrafted badges – is well animated too. Heâ€™s mute throughout, and so body language is used for emotion. He shakes himself off after getting wet and hugs himself and shivers during snowfall, all the while taking in the surroundings with those giant white peepers.

Yarny is, of course, made of yarn – the very same thatâ€™s used to traverse environments. Like the saying goes, always put a part of yourself in everything you do.

The opening level eases you in gently, showing off Yarnyâ€™s skill set. Heâ€™s able to swing through trees like a miniature Tarzan, rappel down steep slopes, lasso nearby objects and even create makeshift trampolines by tying himself to stationary objects. Yarnyâ€™s woolly innards are finite in supply though; use too much to solve a puzzle and heâ€™ll end up resembling a stickman, rendering him unable to reach the next checkpoint.

Checkpoints always bestow a new supply of yarn, and some puzzles are centred on this – occasionally youâ€™re prompted to backtrack and undo some of your handiwork. 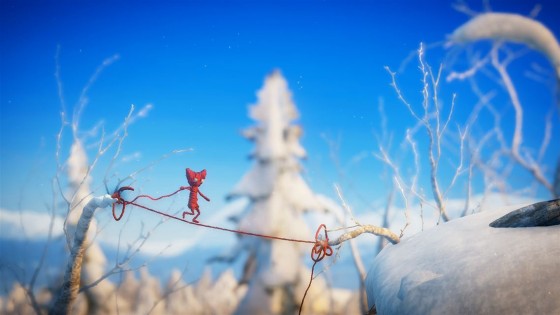 Save for the odd instance where the physics engine goes doolally, dampening the atmosphere in the process, the first half of Unravel is incredibly absorbing. Itâ€™s during the second half that problems start to become apparent. Foremostly, Yarny gains no extra skills as his journey progresses, leaving only the environments and the puzzles therein to induce variety.

Fortunately each level has one or two major set-pieces – including an underground maze and a jaunt around a whirling electrified engine – and it’s always within these that the difficulty level rises towards challenging, such is their fiendish design.

By the time level four (of eight) rolled around though, weâ€™d fully grasped the gameâ€™s sense of logic. A couple of early puzzles had us temporarily stumped, but later examples often seemed like nothing more than rudimentary obstacles to overcome.

To say the developers have lazily recycled ideas is unfair, but there are dozens of recurring themes, such as using logs as makeshift rafts, grabbing and pulling everyday objects to access higher areas and messing around with physics-blessed seesaws. 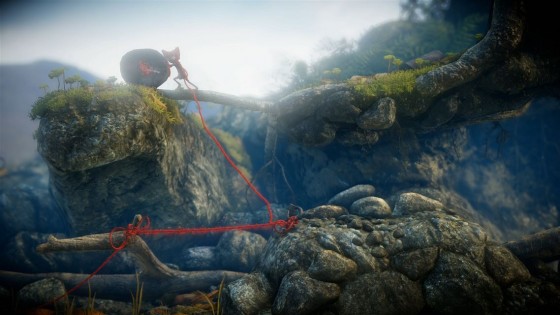 This is an easy game to admire, but tough to love. The amount of man-hours that went into it is nothing short of remarkable, and although it didnâ€™t drag or grow tedious during its 7-8 hour duration, as the game went on new ideas did become few and far between.

Looking back now, the first half of Yarnyâ€™s adventure definitely holds our fondest moments, for this is when everything felt new and fresh.

Unravel may still look the part in years from now, but itâ€™s doubtful that itâ€™ll be remembered in the same light as Limbo, Braid and others cut from a similar cloth. Ultimately, this is the real kicker – we imagine the whole reason EA took a shine to the title was to add an evergreen â€˜indie-esqueâ€™ classic to their portfolio. Like taking a shortcut through the countryside, Unravel is little more than a scenic diversion.