After languishing on release schedules for what seems an eternity, Nintendo has seemingly decided not to release Dr Kawashima’s Devilish Brain Training: Can you stay focused? in the UK. 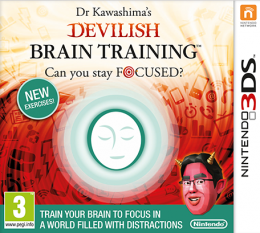 Our pre-order at Tesco Direct (which weâ€™d forgotten all about, somewhat ironically) was cancelled earlier today due to “the supplier no longer publishing the gameâ€.

Presumably, this means it wonâ€™t be released the rest of Europe either.

Dr Kawashimaâ€™s Devilish Brain Training – known as Brain Age: Concentration Training in North America – was originally due for release in April 2013 but was then delayed to â€œoptimise the best possible launch timing of this title within the European market.â€ 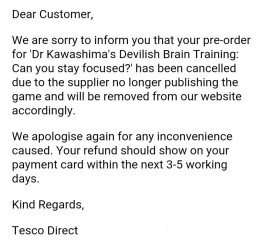 It was expected to launch towards the end of 2013, but a new release date was never confirmed.

We can only speculate as to why itâ€™ll never grace our shores. Chances are though that Nintendo either doesnâ€™t see it suitable for release in Europe, or believes it wonâ€™t appeal to the current 3DS demographic.

Maybe if Nintendo hadnâ€™t let the casual market slip through their fingers, it would still be a viable release.

Curiously, the gameâ€™s overview is still showing on Nintendo UKâ€™s website with the release date remaining as â€˜TBDâ€™.