Itâ€™s half-term, and luck would have it that there are a couple of bits and pieces on the Nintendo eShop to keep the kids quiet.

A demo of LEGO Marvelâ€™s Avengers on Wii U is due Thursday, which of course is a free download, while PokÃ©mon Super Mystery Dungeon heads to the 3DS eShop for Â£34.99. Thatâ€™ll explain why two of the older Pokemon Mystery Dungeon games made Virtual Console appearances last week. Weâ€™ve only just made that connection.

PokÃ©mon Super Mystery Dungeon has arrived to good, but not great, reviews. Still, review scores have been higher than some of Nintendoâ€™s recent first-party efforts (cough, Chibi-Robo: Zip Lash, cough).

Pocket Gamer UK gave it 7/10 – describing it as â€œquite enjoyable in pick-up-and-play blastsâ€ while Destructoid found it to be â€œa solid entry in the PokÃ©mon franchiseâ€.

Thereâ€™s also the cumbersomely titled Return to PopoloCrois: A STORY OF SEASONS Fairytale (Â£29.99) which as youâ€™re no doubt aware, or have at least guessed, is yet another JRPG. Weâ€™ve seen half-a-dozen on 3DS this year already; something that’s hard to moan considering we’re yet to be presented with a duffer. 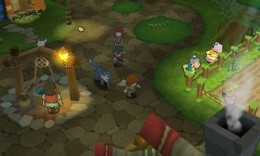 This little ditty combines the PopoloCrois and Story of Seasons (nÃ©e Harvest Moon) franchises, provoking memories of the golden era of RPGs in the process. It isnâ€™t due out in the US until 1st March, which explains why reviews are yet to surface. Expect them to appear online before the week is out.

The 3DS also gets a piece Etrian Odyssey 2 Untold: The Fafnir Knight DLC, entitled Ultimate Feathered Warrior. Itâ€™s free until 25th February; Â£2.29 thereafter. A trio of retro SEGA themes are due too, featuring the Saturn, Dreamcast and a Japanese arcade. Theyâ€™ll set you back Â£1.59 a piece.