There were three of us to begin with – Pavle, Marko and myself (Bruno). Caught inside a war zone, we decided the only way to survive was to stick together. Fleeing with next to nothing, we came across a large house mostly untouched from the bombings. Although most of the furniture had been destroyed, the electrics worked and the kitchen cupboards still contained some food. Why such a large building hadnâ€™t been targeted by raiders yet is a mystery, but we were thankful of somewhere to call home. We even found a few small luxury items like coffee and tobacco. In a time of crisis, a smoke and a fix of caffeine are amongst the few things we can look forward to. 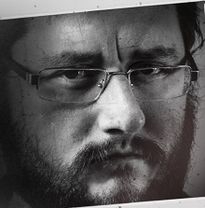 We were in high spirits to begin with, even though we didnâ€™t know how long the war would last. We had our health and each other.

After a rough first night we set about constructing a second bed so that we didnâ€™t have to share. A radio too, so we could listen to music and updates regarding potential supply drops. Daytimes often dragged as there wasnâ€™t much to do, aside making a few improvements to the house and collecting rainwater so we could make homemade booze. It tasted disgusting, but youâ€™d be surprised by what we could trade it for. Traders drive a hard deal, but usually we could wangle some vegetables and roll-ups out of them in exchange for our hooch. Tins of food and medical supplies however set us back a hefty amount items; items we could only gain by looting nearby buildings.

It was only safe for us to explore and scavenge while under the cover of darkness. Although we probably could hit multiple locations during nightfall, we decided that only one of us should venture out at night and ransack a single location. When exploring somewhere for the first time, we only had a rough idea of what to expect. Some locations hadnâ€™t been looted yet and were filled with as many items as we could carry. This was the best case scenario. Worst case: weâ€™d run into armed looters, whoâ€™d only give us a few seconds to turn around and leave before opening fire or giving chase. This is how Pavle, a former football player, met his end. Pavle chose to break into a property and steal. Maybe if he had more patience – and was lighter on his feet – he would have gotten away with it. Regardless, we all had to deal with the fact that he was no longer with us. This was a dark day. 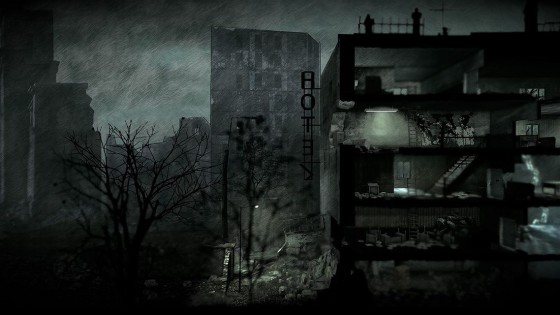 With just myself and Marko left, we took turns in sleeping, guarding and scavenging. One slept or guarded the house while the other looted. Spirits quickly started to worsen, especially after Marko was attacked one night while I was exploring a nearby school. The raiders cut him badly, forcing him to become bedridden, and also took some of our stuff. I bought him food and medication, but supplies were dwindling. Fortunately a neighbour dropped by almost every day to see if we had anything to trade. I once had to exchange almost all of our firewood and tobacco for a single roll of bandages. For a while it looked like Marko wasnâ€™t going to make it, but after a few days he pulled through.

Roughly a week later we had a knock at the door. It was a small boy named Sergei. He had nobody, and nothing apart from the clothes on his back. He promised that he wouldnâ€™t eat much of our food and, all things considered, he looked like he was in good health. Unlike some of the looters and the raiders we hadnâ€™t lost our sense of humanity yet, so we decided to take Sergei in. I built him a swing out of scrap, so he would have something to keep him amused. Sometimes he played hopscotch too. Occasionally he was needy, asking for hugs and attention, but he wouldnâ€™t be a child otherwise. Marko taught him how to use the stove and the rainwater collector, should something – God forbid – ever happen to either of us. 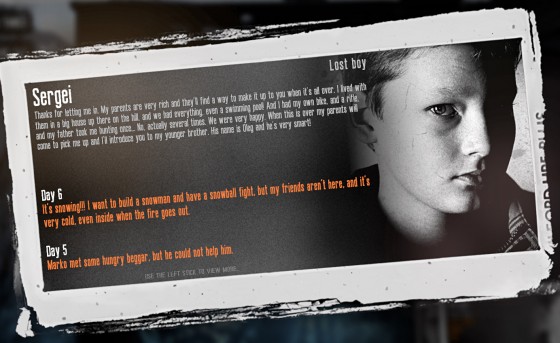 Alas, something did happen. With three of us in the house again, we lost track of food supplies and were forced to steal from a church. Marko forgot to take a weapon with him and so he met a swift end. For few bleak days it was just myself and Sergei in the house. Sergei became sick and all we had were medicinal herbs, which arenâ€™t always effective. Sergei is too young to venture outside so I slept during the day and scavenged at night, leaving Sergei in the house alone. Of course, this soon caused Sergei to become traumatised. He started drawing disturbing images, and mostly spent the days crying. If we both stayed in the house at night I wouldnâ€™t have been able to find the vital medication he needed. I had no choice.

Our streak of bad luck was broken by another knock at the door. This time it was an older girl, Katia. Sergei took an instant shine to her, and together they spent the day talking about the places they could go and the things they could do after the war. She was a real spirit booster, and good at bartering deals with the local traders too. Most importantly though, she could guard the house and look after Sergei at night while I looted. I was having to go further afield for supplies, but over time I had learned how to prepare myself. A few locations had barred doors, so I knew I should take a saw blade when visiting. I also knew that some traders, such as at the hospital, were desperate for medical supplies. Amazingly, the hospital still stands and the nurses remained at their post. They truly deserved a medal – they even patched me up after I was injured by raiders.

So far I was yet to kill or even harm another survivor, but it was becoming increasingly apparent that myself and Katia needed to arm ourselves. It felt like it was only a matter of time before raiders killed one of us. They knew that we only had kitchen knives to arm ourselves with. We needed guns. 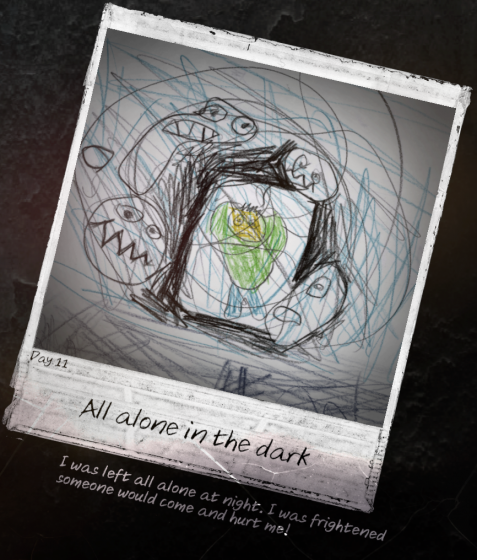 But it was too late. I returned one night, tired and depressed enough as it was, to discover that Katia and taken Sergei and left. I was alone again. Although this did mean I could manage on minimum supplies, I had nobody to turn to in moments of need. Winter had arrived too, coating the garden and tree house in a thick layer of snow. I could build a snowman if I wanted, but what was the point? Raider attacks were frequent and time was against me. At least I had stockpiled enough wood to keep the burner going all day. Even so, I had to change my daily routines – the rain collectors had frozen up, so I now had to collect snow and then melt it using the stove.

My mood only worsened over time, so I took to the bottle to brighten my spirits. Days started to blur into one another; I would eat, sleep, gather snow, bandage my wounds and then scavenge at night. I regretted all not building a more efficient wood burner, and a vegetable garden. If I could go back in time I would have planned things more thoroughly.

One final visitor graced my front door. Zlata, another female. I was grateful for the company but sadly our time was short together – after just a couple of scavenging runs, she fell terminally ill. Medicinal herbs couldnâ€™t help her. I fueled the stove with books, as this was all we had left. As bad as it sounds, I even considered not sharing food with Zlata – her days were numbered, after all. After returning one night, I found that she had frozen to death. I now feel like my days are numbered too, and have even contemplated suicide. I have survived winter, but now crime is on the rise. My only hope is that the reports on the radio about a possible ceasefire are true. 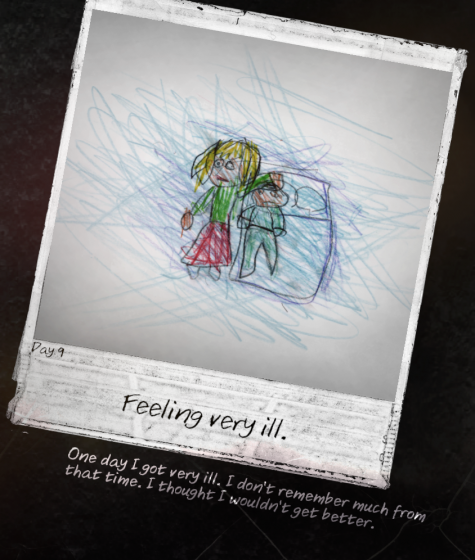 This war has brought out the worst in many of us. It has forced people to attack and maim those who are merely trying to survive, even innocent children. It has made us contemplate becoming petty thieves, breaking into homes just to steal a few tins of food. And after having a gun pointed at me by our own soldiers, whose job it is to protect us, I even questioned what side the army was actually on. War can however also bring out the best in us, making us feel compassion for those who we barely know. I shared what little supplies I had left with complete strangers, simply because I knew deep down it was the right thing to do. Sergei had lost everything – how could I live with turning him back onto the harsh city streets, knowing that he wouldnâ€™t make the night?

If you were to experience the things I have gone through, you wouldnâ€™t even dream of wishing the consequences of war onto another.