Itâ€™s another modest week for the UK Nintendo eShop. By which we mean busy, but not too busy. Minecraft: Story Mode and Mario Kart 64 head to Wii U while the 3DS receives three new titles.

An upcoming Project X Zone 2 demo may pique the interest of some, too.

Mario Kart 64 is due this Thursday for Â£8.99. An early release for the N64, it arrived hot on the heels of Super Mario 64 and proved that Nintendo was only willing to release their N64 big hitters when they were good and ready. It remained a popular multi-player choice throughout the whole of the consoleâ€™s life, alongside GoldenEye 007, Perfect Dark and an unprecedented amount of wrestling games. Minecraft: Story Mode is something of a last minute announcement – it isn’t mentioned in Nintendoâ€™s eShop press release for this week; Telltale Games themselves confirmed its impending arrival. The first episode – The Order of the Stone – is due Thursday for $4.99 (UK price TBA) while the season pass has been priced at $19.99 (again, TBA). As well as off-screen TV play, it also has touch-screen controls. Despite a sense of over-familiarity, Minecraft: Story Mode went down well on other formats. Expect fun and familiarity, then. 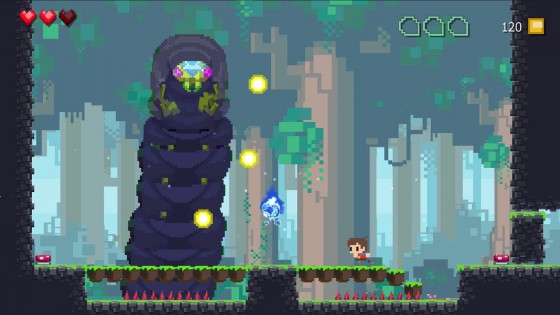 The Wii U also receives the intriguing 2D platformer Adventures of Pip (Â£11.79), while Life of Pixel (â‚¬9.99) spreads into the rest of Europe after hitting the US and UK a few months ago. Adventures of Pip also launched in the US months ago , arriving to positive reviews.

“Adventures of Pip is a delightful little platformer full of charm, challenge and impeccable level design. While still a little rough around the edges, its mechanics are unquestionably solid, and itâ€™s clearly been crafted with the love and talent of a team determined to realize their vision” said Hardcore Gamer who handed out a solid 4/5.

Over on 3DS thereâ€™s mobile conversion Radiohammer (Â£3.98) – a rhythm action game developed by Arc System Works and Vinyl Lab – and Moco Moco Friends (Â£26.98), an exceeding colourful JRPG featuring “cute but violent” plush creatures. The high price point can be attributed to the fact that it was a retail release elsewhere in the world. Destructoid thought the US version was pretty good, giving it an above average 6/10. â€œ[…] there are so many better games to choose from, but if you can’t get enough RPGs, Moco is ready and willing to accept your callâ€.

Another premium release arriving on 3DS is Goosebumps: The Game (Â£19.99). It launched on consoles in time for Halloween last year, but it appears that the movie on which it ties into has only just reached UK cinemas. Developed by WayForward, itâ€™s an old school point â€˜nâ€™ click adventure. Reviews werenâ€™t great, including a miserable 2/10 from Push Square. We doubt this belated handheld release will fare any better.

Discounts for this week are a bit of a mixed bag too. On Wii U Super Toy Cars falls to Â£3.49 while The Quiet Collection drops to Â£2.39. Minecraft clone Stone Shire meanwhile gets a permanent price drop from Â£4.99 to Â£1.79. Reviews would suggest you’re better off sticking with the real deal.