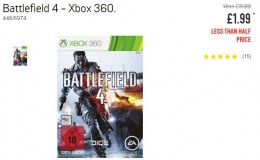 What a nation of bargain hunters we are.

Due to the top ten remaining mostly unchanged, this is the most exciting thing to occur within the charts this week

Call of Duty: Black Ops 3 sees in the new year by holding onto #1. That’s then followed by FIFA 16, Star Wars Battlefront – which is still yet to leave the top #3 since launch – GTA V, and Fallout 4 at #5.

The rest of the top ten then comprises of Rainbow Six: Siege at #6, WWE 2K16, Just Cause 3, AC: Syndicate, and the aforementioned Battlefield 4 at #10.

Wolfenstein: The Old Blood made a top 40 reappearance at #21 while The Sims 4, Dishonored: Definitive Edition and Call of Duty: Advanced Warfare re-entered at the lower end of the chart. There were no new entries.