Although the N64â€™s library wasnâ€™t exactly teeming with decent realistic racers (Top Gear Overdrive and Ridge Racer 64 were perceived as the formatâ€™s finest), it did have plenty of superb ‘alternative’ racing games.

Two of these head to Wii U Virtual Console this week – 1080Â° Snowboarding and Wave Race 64. Theyâ€™re often regarded as the best snowboarding and jetski racers of all time due to their excellent track design and realistic snow/water physics.

Nintendo must still be in the Christmas spirit as purchasing either 1080Â° Snowboarding and Wave Race 64 on the same Wii U results in a 50% discount for the other. Both are the superior US versions, too.

The UK pricing is currently unknown as Nintendo are yet to release an official UK roster for this week. Â£8.99 is the usual the price of N64 re-releases though, so that’s a safe assumption. 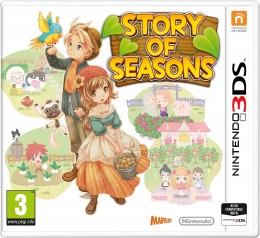 Speaking of discounts, EnjoyUp Gamesâ€™ 99Moves and Abyss are both due a drop on Wii U this week. Then on 3DS Nano Assault EX, Football Up 3D, Real Heroes Firefighter 3D and a handful of mediocre Circle Entertainment games are in line for a cut. Nano Assault is well worth a look.

This leaves us with Story of Seasons on 3DS, also due at retail this week. It’s the final retail release of the year, no less, and a rather unexpected one at that. We simply assumed that Amazonâ€™s 31st December release date was a default.

Published by Nintendo themselves, itâ€™s actually a rebranded Harvest Moon game. â€œIt may not be the most polished game, with its finicky frame rate and an underwhelming 3D display, but the charming characters and satisfying gameplay make this a game worth any Harvest Moon fan’s timeâ€ said Nintendo Life in their review.