In 1983 arcade legend Taito gave the world Chack ‘n Pop, a simple single-screen platformer that eventually lead to the creation of Bubble Bobble and its wealth of spin-offs and sequels. The Japanese arcade giant had the formula to creating single-screen platformers perfected from out outset – an irresistible combination of colourful visuals, jaunty music, tight controls and a smooth learning curve.

In each Taito success story the main characterâ€™s method of attack also played a key element. Capturing enemies in bubbles that floated to the top of the screen, ready and waiting to be popped, was a hoot in Bubble Bobble. And although more of a vertical platformer, trapping and crushing enemies under rainbows in Rainbow Islands was curiously compelling. These two games in particular were incredibly popular, eventually converted to just about every 8-bit and 16-bit system. Even the obscure ones.

Certainly in the â€˜80s, nobody could beat Taito at their own game. Jalecoâ€™s Rodland did come close though, to the point where itâ€™s often mistaken as a Taito effort. Toaplanâ€™s Snow Bros.: Nick and Tom from 1990 hit all the right notes too, and like Rodland soon found its way to home systems. 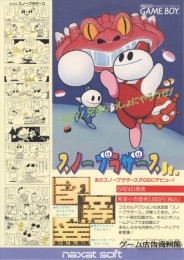 Itâ€™s clear right from the outset that Toaplan had studied Taitoâ€™s handiwork very closely as it features many similar elements and ideas. Itâ€™s however doubtful anybody outright mistook it for a Taito game like Rodland before it, as the colour palate in Snow Bros. is heavily muted while the visual style is ripe with influences from Japanese folklore.

Sporting fez hats and dungarees, Nick and Tom didn’t really resemble traditional snowmen. The box art for Capcomâ€™s NES and Game Boy conversions omitted the brotherâ€™s offbeat headwear, and itâ€™s only here that they resemble your common garden variety snowman. This was more than likely to make it appeal to a western audience.

Nick and Tomâ€™s method of attack is a compelling one which instantly hooks. By firing short-distance projectiles at enemies they can be turned into giant snowballs, ready to be rolled into others. Time your push just right and itâ€™s possible to vanquish all remaining enemies at once, with most stages featuring around six enemies each. Fail to fully cover an enemy with snow and theyâ€™ll soon shake it off, undoing your effort. This does wonders at keeping you on your toes, daring you to remain in enemy filled locations for longer than you ought to. 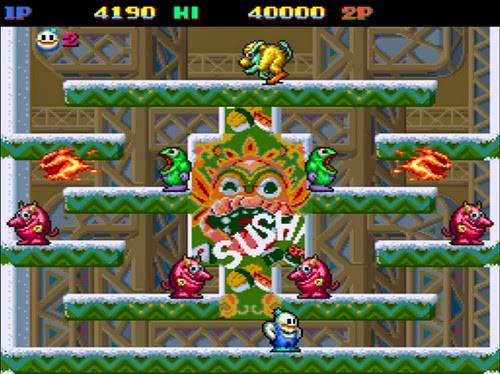 Logic dictates you should at least try and get to the top of the stage in order to maximise chances of hitting as many enemies as possible. The enemies are so efficient at patrolling their platforms though that this proves to be a tricky task, and thatâ€™s despite the tight controls – Nick and Tom somersault onto platforms in an amusing, and responsive, fashion.

When a stage is cleared a few goodies appear (pieces of sushi, usually) before whisking the player off to the next level. The jaunty music changes from stage to stage, while new enemies are frequently introduced including demons that barf lava onto Nick and Tom from above. Boss battles feature too, which mostly entail turning the bossâ€™s lackeys into snowballs and launching them just at the right time. 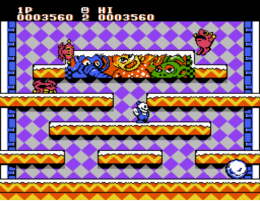 Being an arcade game and all, Snow Bros.: Nick and Tom takes less than an hour to finish. Considering a lot of console games in the â€˜80s were conversions of arcade titles, this wasnâ€™t an issue in the slightest when it came to the home versions.

Capcomâ€™s NES conversion holds up incredibly well. Although the sprites are smaller theyâ€™re just as colourful and the new chequered backdrops suit it rather well, filling in for the arcadeâ€™s more detailed backgrounds. The Game Boy version – known as Snow Bros. Jr – did however suffer from the systemâ€™s limitations. Badly, in fact – the sprites were poorly drawn, backdrops completely absent, the controls unresponsive and it was single-player only.

The Mega Drive version fared best of all. Unsurprising, given the systemâ€™s power and the fact it was converted by Toaplan themselves. Toaplan even saw fit to add a new intro and 20 new stages in which twin princesses Puripuri and Puchipuchi become playable, following the surprise kidnap of the brothers themselves. 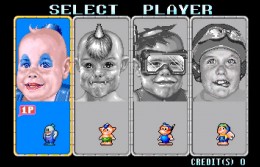 Released only in Japan, the Mega Drive version is incredibly popular with bootleggers. Almost every copy that appears on eBay is a reproduction. Speaking of eBay, the NES version often sells for a hefty sum while the Game Boy iteration can fetch between Â£25-Â£35.

Then in 2006, a ROM of the cancelled Amiga version of the arcade original surfaced online. Along with Commodore 64 and Atari ST versions, it was due out in 1991 via Ocean. Footage on YouTube suggests that it was a more than a competent conversion, complete with a new intro showing a traditional snowman in a snow-covered village being struck by lightning to become one of the Snow Bros. Presumably Ocean felt theyâ€™d better explain why Nick and Tom looked so bizarre. 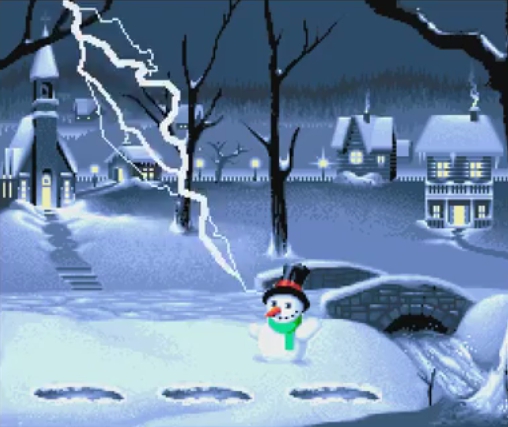 Legend has it Ocean was forced to cancel their complete and ready-to-ship conversion of Taitoâ€™s Liquid Kids after it emerged that they didnâ€™t own the rights. In other words, they went ahead and made it without ever double checking that they even had the license. Weâ€™re wondering if this was the case with Snow Bros. as both were handled by Ocean France. The Amiga still had plenty of life left it in 1991, and so a decline in the formatâ€™s in popularity can hardly be cited as a reason for its cancellation. 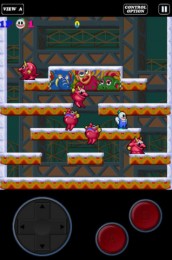 If you want to give Snow Bros. a play for yourself, then youâ€™re in luck – itâ€™s available as a free ad-supported download on iOS and Android. From what we can tell, itâ€™s the arcade original simply with a filter applied to smooth the visuals over. The controls work well but only receiving one free credit a day is very restrictive. You can however save them up for an extended session.

New license holders Isac Entertainment Corp. have released some mobile spin-offs over the last couple of years too, including Snow Bros Jump – a clone of Doodle Jump – Snow Bros. Runner and Snow Bros. Hop. We canâ€™t say weâ€™ll be trying them out any time soon.

While Snow Bros. may not get you into the yuletide spirit like Christmas NiGHTS, James Pond II: Robocod and other festive video games, it’s still quaint enough to melt the coldest of gamerâ€™s hearts. Few developers came just as close to single-screen platformer perfection.