Bad video games have a habit of living in infamy these days. This is all down to the YouTube generation regularly wheeling out modern day duffers like Sonic 06, Big Rigs and Ride to Hell: Retribution so that they can be mocked, ridiculed and childishly cursed at.

Fellow YouTuber and actor Stuart Ashen – aka Ashens, the man who single-handedly made brown sofas fashionable again – is all too aware that the likes of the aforementioned have been covered extensively over the years, and as such has handpicked some lesser-known games to cast critical eyes upon. 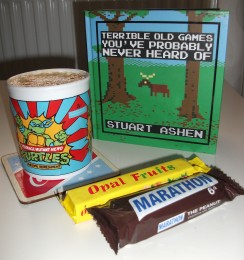 Home computer games from 1980-1995, specifically. Console games donâ€™t get a look in, save for the inclusion of the Amiga CD32 pack-in Dangerous Streets. The CD32 was little more than an Amiga 1200 with a CD drive after all, Ashens argues. Violet Berlin also has a quick dig at the NESâ€™s Castlevania II – a game with a translation so botched that the cryptic clues were beyond baffling – but thatâ€™s your lot for console games. Definitely donâ€™t expect to find the pages filled with oddities from the SEGA and Nintendo 8-bit era. That said, the ZX Spectrumâ€™s atrocious conversion of Out Run does get a mention.

Nineteen games feature in total, with formats like the Commodore 64 and ZX Spectrum most predominant. Several pages are dedicated to each game, complete with large screenshots, sprite rips and the occasional piece of eye-offending box art. To say that the book is packed to the rafters with information is slightly untrue, but the full-colour pages are laid out in an appealing enough fashion.

In a surprise twist [Potential spoiler] one of the games was created by Ashens himself back in 1996, using Amiga creation tool Amos. A shoddy single-screen shooter likened to arcade hit Virtua Cop, he wisely chose not to release Killjoy following the events of the Dunblane school massacre.

Ashen has clearly done his homework; the last few paragraphs for each entry often discuss what the developers created next, or were best known for. A separate boxout is used showcase review scores from the gaming press. Most of the games covered here were so terrible though that they were never sent out to the press to review, or were reviewed by just a single magazine.

Still, the subject matter has obviously been researched as in cases where the developer(s) arenâ€™t credited attempts have been made to track them down. Ashens firmly believes that Mastertronicâ€™s notoriously duff Bionic Granny was in fact coded by David and Richard Darling prior to founding Codemasters. 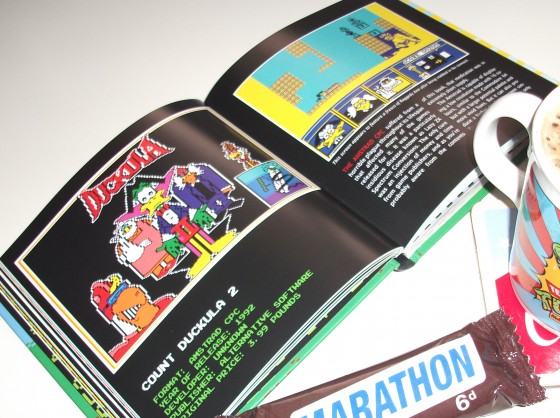 Thereâ€™s much to admire here, including Ashenâ€™s uncanny ability to describe each game so vividly that itâ€™s possible to conjure up some very clear mental images. A few entries also have every frame of the main characterâ€™s animation laid out, just to further highlight how little effort went into them. The horse in equestrian sim Show-Jump [sic] had all of two frames of animation, would you believe.

Later in the book Ashen even goes beyond the call of duty by attempting to get the curiously named post-apocalyptic adventure SQIJ! in a playable state by amending the gameâ€™s code. Legend has it that the developer was so fed up with the publisherâ€™s demands that he purposely gave them a broken and unfinished game. Rather than scrap it entirely upon receipt, publisher The Power House instead released it (twice!) regardless.

Terrible Old Games Youâ€™ve Probably Never Heard Of is an enjoyable read thatâ€™s humorously written. And keeping true to his word, the last section of the book is dedicated to those who helped fund the project via Unbound. Without the support of these people the book would have never happened.

Weâ€™re hoping that Ashen will be able to write about more terrible games in the future – he certainly has a knack of sniffing out choice titles from the depths of obscurity. Other YouTubers keen to ridicule gamingâ€™s foulest should take note that a little bit of research goes a long way – something highly evident here.

‘Terrible Old Games Youâ€™ve Probably Never Heard Of’ by Stuart Ashen is out now in hardback and for Kindle, published by Unbound. RRP Â£9.99. Book purchased using our own supply of gold coins.