This winter hasnâ€™t exactly been a vintage one for Nintendo so far, with many of their Christmas releases arriving to a lukewarm reception. That streak ends now – this week sees the release of Xenoblade Chronicles X and Mario & Luigi: Paper Jam Bros. All signs point to them being the saviours of this season.

Releases starring the likes of Kirby and Pokemon are also due out this week, in varying guises.

Xenoblade Chronicles X is the big one, of course. The eShop pricing has been set at Â£49.99 or Â£40.99 for those who have downloaded Xenoblade Chronicles on the same Wii U. Reviews are due to go live later today, with early word (aka Twitter) informing that itâ€™s up there with the best the console has to offer. Weâ€™ll have a review round-up on the site in due course. Incidentally, a number of â€œHigh-Speed Data Loadingâ€ patches will be available at launch for the disc version, allowing data to be saved to the Wii U to speed up loading times.

The Wii U also sees three new Virtual Console releases. Itâ€™s great to see Capcomâ€™s cult classic point â€˜nâ€™ clicker Zack & Wiki: Quest for Barbaros’ Treasure dusted off for a digital re-release (Â£13.49 until 18th December; Â£17.99 thereafter) as lots of people overlooked this one at launch. Kirby Mass Attack and Kirby: Power Paintbrush are the other two VC titles, featuring an inciting means of discount – buy one and the other can be had for Â£4.49. Either will set you back Â£8.99.

Puzzler Human Resource Machine – from the guys behind World of Goo and Little Inferno – is this weekâ€™s last Wii U release, arriving for Â£8.99. The idea is to manage a mail sorting office by compiling scripts that resemble programming languages. â€œHuman Resource Machine is one of the most difficult puzzle games we’ve played in quite some time. It’s not difficult for difficulty’s sake though, it’s difficult because it’s different. It requires you to think less like a gamer and more like a developerâ€ said Nintendo Life before dishing out 7/10. 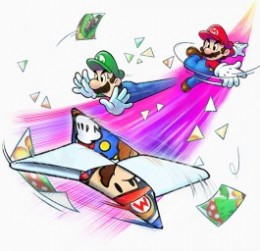 Over on 3DS Mario & Luigi: Paper Jam Bros. – a crossover of the Mario & Luigi and Paper Mario series – takes the limelight. As you may be aware, Nintendo brought the release date forward. Now there’s a thing. A couple of reviews have gone live early – it was given 9.0 from Dutch site XGN and 8.5 from InsideGamer.nl. Mighty encouraging.

Then we have PokÃ©mon Picross, which was announced during the last Nintendo Direct. Itâ€™s free to play, which of course means it supports micro-transactions. Looks like 200 â€˜Picritesâ€™ (the in-game currency) can be purchased for a one-off price of 89p, then costing Â£1.39 for the same amount thereafter. Prices extend to Â£22.49 to 4000 Picrites.

Weâ€™d wager youâ€™d have to be a huge fan of either Pokemon or Picross (or both) to blow that amount. We wonâ€™t put it past some people though – Picross games can be scarily addictive.