When rummaging around charity shops thereâ€™s a game we see surprisingly often. Not FIFA 08 or any other sports sim you’d care to mention, although they are understandably common, but rather EAâ€™s Lord of the Rings: The Two Towers tie-in from 2002. As 32-bit era tie-ins went, The Two Towers – and the equally common The Return of the King – were pretty good, nailing the look and feel of their silver screen counterparts. Itâ€™s fair to say, then, that countless PlayStation 2 owners received these games for Christmas, given the amount of copies we routinely come across.

Star Wars Battlefront looks set to become this generationâ€™s Two Towers – a game thatâ€™ll sell a ridiculous amount of copies this winter (EA aims for 13 million copies) before languishing in charity shops in years to come. Of course, itâ€™ll occupy CeXâ€™s shelves long before then. Our estimate? Oh, letâ€™s say by February or March. With just two years to get a Star Wars game shipshape for Episode VIIâ€™s release – as opposed to the three years that this yearâ€™s Call of Duty received – Battlefront has a whiff of style over substance about it. 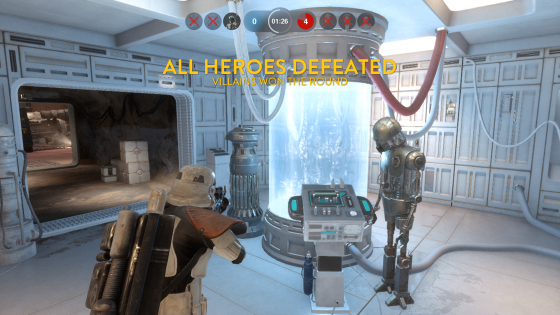 This is a hard game to fault when it comes to presentation, save for the fact that Luke Skywalker and Han Solo have something of a store mannequin look about them, and that their vocal work is provided by soundalikes. DICE even managed to digitally immortalise Star Warâ€™s glitzy pyrotechnics. Heck, we even approve of the gratuitous use of the classic â€˜Wilhelm screamâ€™ when taking out Stormtroopers.

In other areas though, Battlefield is rather lacking. Youâ€™ve probably heard by now that thereâ€™s no single-player campaign present – EA made gaming news headlines with their belief that nobody plays the campaign mode in online-focused shooters. There are however a few single-player missions set against AI bots to beat, each with a short intro sequence showing off those captivatingly lavish sights and sounds. Performance is rated in stars – thus giving incentive to return – while the survival mode has five hidden collectables per location to look out for. Survival mode is easily the best of the lot, allowing for split-screen and online co-op. Enemies attack in waves, bringing in vehicular reinforcements along the way. The default difficulty level wonâ€™t challenge genre veterans, but the â€˜hardâ€™ and â€˜masterâ€™ difficulties are worthy of their names. Sadly neither is a good showcase of DICEâ€™s AI programming, with enemy routines becoming predictable over time. Pro tip: leave a single Stormtrooper alive at the end of a round and you can merrily focus on collectable hunting while they attempt to give chase. 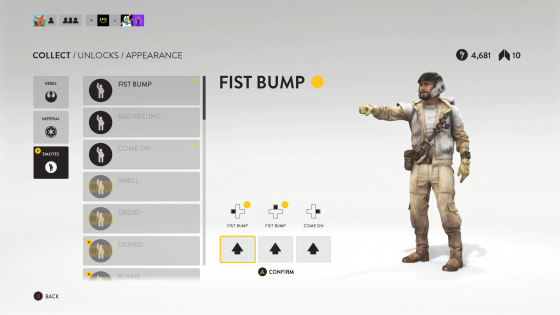 While the single-player missions – which also include an elongated, performance rated, tutorial – arenâ€™t quite as filler-esque as we expected, the time spent playing probably wonâ€™t extend to more than a couple of evenings. It all depends on how keen you are to get three star ratings across the board.

Moving onto multiplayer, weâ€™re willing to admit we had doubts about matchmaking and server stability, but were left presently surprised. Getting into a match is effortless, with minimal time spent in lobbies and staring at menus. Most matches end closely too, which speaks volumes about balancing.

Newcomers may struggle against experienced players at first, but literally just for an hour or so. This is all it takes to rise up the ranks a few times in order to unlock a better gun (an automatic blaster) and a thermal grenade that proves invaluable for clearing out clusters of enemies. In fact, grenades are perhaps a little too invaluable. Death by seemingly random grenade throwing happens irritatingly often. This isnâ€™t helped by the fact that a lot of the locations are connected by narrow tunnels. Come face to face with two or more enemies while in a passageway and itâ€™s unlikely youâ€™ll make it out alive. 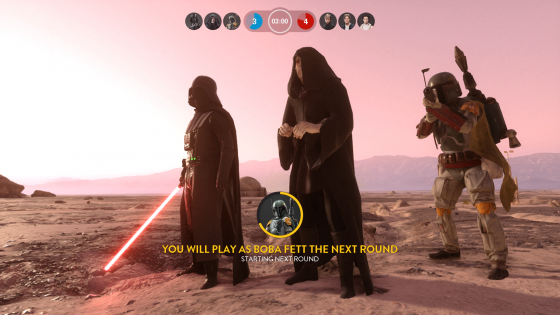 At the time of typing eight maps are available, spread across four locations – Endor, Hoth, Tatooine and the seldom seen rocky lava planet Sullust. Episode VIIâ€™s Jakku is due in December. Endor is easily the highlight – both visually and in terms of design – due to its open and non-linear nature. Hoth is battle ready, complete with trenches and turret placements, while Tatooine is full of caves, cracks and crevices to hide in. Sullust meanwhile has pools of lava that are best avoided. Another Sullust map is notable for being set on a ridge that gives a full view of the battleground below. All maps have backdrops to make them appear suitably busy – various spacecraft firing lasers above, or Ewoks and Jawas running around haphazardly. Play as the Empire on Endor and you may get hit on the head by a rock lobbing Ewok. Not bad for a little furball.

Spacecraft – Tie Fighters, X-Wings, A-Wings, etc – be only be piloted in certain modes, summoned by collecting a power-up. These appear often, giving anybody eager to get airborne the chance to do so. Spacecraft are tricky to manoeuvre at first (flying close to the ground is trickier still, and purposely so) but once mastered taking down several bogies in a row is rather satisfying. Snow Speeders meanwhile can be used to tie up the legs of the Imperial Walkers, although the means of doing so is far from exciting. Rather than take a cue from the N64 launch title Shadows of the Empire, all thatâ€™s required is to keep an icon inside a target window. Thanks to the ability to trample ground troops, getting behind an AT-ST fares better. Why there arenâ€™t any deep space battles though is a mystery. Surely it wouldnâ€™t have taken long for DICE to knock up a space scene for the Fighter Squadron mode. 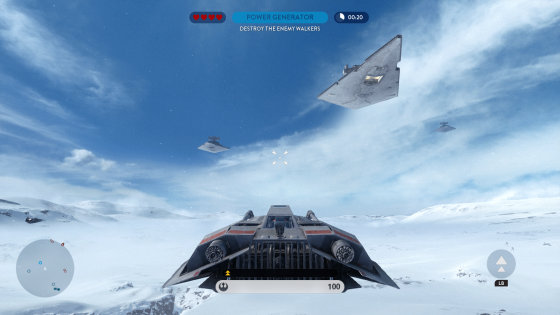 On first appearance Battlefront seems to offer a bountiful amount of match types. After trying them out a few times though youâ€™ll quickly notice that many are rather similar. Cargo, Drop Zone and Droid Run all entail capturing and defending an object, be it a drop pod or Gonk droid. Supremacy lets 40 players fight it out while capturing bases; the 20 player Blast simply removes the base capturing.

This leaves us with Walker Assault, Hero Hunt and Hero vs Villains – Battlefrontâ€™s three best modes. Walker Assault excels as it feels tailored to the Star Wars universe. Thatâ€™s to say, it isnâ€™t some generic multiplayer mode with in Star Wars clothing. Hulking Imperial Walkers slowly make their way from one side of the map to another, firing on any nearby enemies. If it manages to reach the end of the map, the match is lost. Cue one lengthy struggle to control the uplink posts, which can enable – or disable, for those on the dark side – air support.

Itâ€™s in Hero vs Villains that the balancing between the six heroic characters – Luke, Leia, Han, Darth, Boba and Palatine – really shines. Each has their own defensive, evasive and pleasingly overpowered moves that counterbalance that of the opposition. This mode is a 6v6 affair lasting five rounds. A round ends when a teamâ€™s trio of heroes are defeated, and as such itâ€™s the role of the remaining three player players per team to keep them alive. Whereas becoming a Hero is elusive in other modes, here everybody gets the chance to take the role of an iconic Star Wars character. 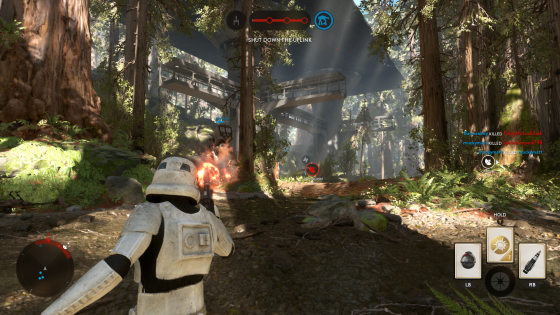 Hero Hunt meanwhile is where mastering each character pays off. One player takes the role of a hero; the rest have to hunt them down. Once defeated, that player then becomes a random hero. Whoever has the most kills at the end of the match wins. This mode has an amount of depth to it as each character has their nuances. Thereâ€™s no point using Darthâ€™s force choke on a group of enemies as it only affects one individual, for instance. Bobaâ€™s jetpack can only be used for short bursts, while Han and Leiaâ€™s charged shots require both precise aiming and timing.

With only three standout modes, itâ€™s fair to say that Battlefront doesnâ€™t feel like a culmination of everything DICE has learnt and perfected over the years. Thatâ€™s not to say that their general genre expertise isnâ€™t on display, however – we really appreciate the ability to use a partnerâ€™s loadout, especially when up against experienced players.

As a whole, the package simply feels a little watered down and lightweight; something to appeal and appease a casual audience. The result is something thatâ€™s great for instant gratification, but lacks lasting appeal. Maybe once all the extra content has been released – some six months down the line – this wonâ€™t be the case, but as we said earlier, copies are bound to occupy and linger on CeXâ€™s shelves long before then.