The easiest way for a company to get their product â€˜out thereâ€™ is to give it away for free. Manufacturing cost depending, of course. Turns out the Raspberry Pi Zero is both small and cheap enough to be given away with the new issue of The MagPi magazine. 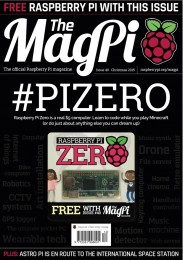 Roughly half the size of a credit card, it features a 1GHz ARM11 core processor (40% faster than Raspberry Pi 1), 512MB of SDRAM, a micro-SD card slot and a mini-HDMI socket for 1080p60 video output.

Running on Raspbian, it has more than enough juice to power the free Minecraft: Pi Edition. Bet that piqued your interest.

The magazine – available now for Â£5.99 – features guides and tips for getting your shiny new plaything up and running, including a tutorial showing how to turn it into a NES emulator.

Although the Raspberry Pi Zero only has an official RRP of Â£4, the device is currently sold out and exchanging hands for several times that amount on eBay. We had no trouble finding a copy of MagPi in our local WH Smiths though. In fact, it was the first (and last) place we had to look. Maybe we got lucky.

A tiny programmable computer available free with a Â£5.99 magazine. Welcome to the space year 2015.