A quartet of Virtual Console releases brighten up an otherwise quiet week for the UK Nintendo eShop. Itâ€™s looking like a quiet week for Xbox One and PS4 too, due to a lack of big name releases. A quiet gaming week in November. Now thereâ€™s a thing.

When we say quiet, we mean really quiet. The eShop doesnâ€™t see a single indie release this week, just three retail downloads and demos of recent 3DS titles I Love My Pony and Johnny’s Payday Panic.

Amazon has the retail release of Kung Fu Panda down as 4th December, so itâ€™s a little surprising to see it launching on the eShop a week in advance. Itâ€™s a rather blatant clone of Super Smash Bros, developed by Vicious Cycle. We understand that some content is being held back until after the release of the upcoming third movie, presumably due to potential spoilers and whatnot.

Thereâ€™s not much we can say about Monster High New Ghoul in School or Fireman Sam To The Rescue, save for the fact that the eShop pricing is reasonable. Monster High on Wii U is Â£27.99 on Amazon, so the download version is actually a few quid cheaper. Just like it should be.

Onto the main event – four Virtual Console releases, all for Wii U. From Koei Temco we have the recommended Ninja Gaiden II: The Dark Sword of Chaos and Ninja Gaiden III: The Ancient Ship of Doom. Back when IGN reviewed the Wii VC releases from 2007 they were given 8.5 and 8.0 respectively. Be warned though – both are tougher than frozen toffee. 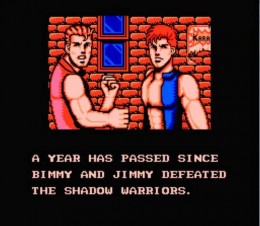 Then thereâ€™s Konamiâ€™s The Adventures of Crocodile Dundee, sorry, Bayou Billy. We recall this one getting a kicking from the pre-internet gaming press – it offers fighting, racing and shooting sections, none of which really hit the spot. Maybe treat this one as a gaming curio from Konamiâ€™s past.

This leaves us with 1991â€™s Double Dragon III: The Sacred Stones. Rather than attempt to convert the arcade original to NES, developers East Technology thought it was much wiser to give the then aging 8-bit system its own version. Hilariously, they accidentally misspelled one of the lead characterâ€™s names – Jimmy is referred to as “Bimmyâ€ during the gameâ€™s opening. Good work.

Each of these Virtual Console releases will set you back Â£3.49 a piece.

The only other means of blowing your eShop budget this week is on a range of new Hello Kitty themes (89p each), plus Splatoon and Yoshiâ€™s Woolly World themes (Â£1.79) each. There are a few discounts too, but just like last week theyâ€™re hard to get excited about. The catchily named Real Heroes: Firefighter 3D Download Version seems to be permanently discounted.