Thanks to a sizeable marketing budget – not to mention the runaway, and surprise, success of Fallout Shelter – itâ€™s highly likely that Fallout 4 will attract many franchise newcomers. Fallout greenhorns are arguably going to get the most out of this long awaited adventure as thereâ€™s an unshakeable sense of overfamiliarity.

That said, Fallout veterans will find comfort in that familiarity too. For many, Fallout 3 was one of the defining games of the last-generation. Fallout 4 simply takes everything that made Fallout 3 great while adding a few next-gen bells and whistles. And a hulking great suit of weaponized armour.

No time is wasted getting players settled and back into the swing of shooting and looting. Actually, thatâ€™s a lie – thereâ€™s plenty of room for potential time wasting during the gameâ€™s opening due to the character creation tool proving to be curiously entertaining. Hideous freaks, celebrity likenesses, creations closely resembling ones self – it speaks volumes that even something as fundamental as a character creation tool can leave a positive first impression. Stepping away from the bathroom mirror, the protagonist reacquaints with their family before their homely little world is literally torn to pieces by a nuclear explosion. Quickly ushered into Vault 111 before being cryogenically frozen, our intrepid adventurer awakens 200 years later. Not only are they are a man (or woman) out of time, but also without child – tiny tot Shaun was forcibly snatched while thawing out from 200 years of slumber. 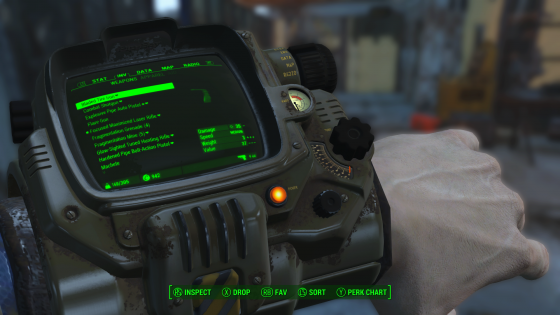 While without child, they arenâ€™t without hope. After returning home with a shiny new Pip-Boy in hand (well, on an arm) our hero quickly starts to pick up clues and trails leading to Shaunâ€™s whereabouts and his kidnappers. This is the main story quest, and itâ€™s not long until the location of Diamond City – a shanty town built inside a well-defended baseball stadium – is added to the map. This instantly gives something to focus on; somewhere to head to. It wasnâ€™t until roughly 20 hours in that we first stepped foot in Diamond City however, as Bostonâ€™s vast wasteland just begs to be explored. When heading out on a mission itâ€™s impossible not to become distracted by venturing into far off buildings, or attacking packs of mutated creatures in hope of rare items and materials.

Materials now serve a far greater purpose than before, all thanks to the introduction of a new crafting system. Not only is it possible to craft and upgrade weapons, armour, foodstuffs and medicine but also entire communities. Fans of The Sims – of all things – will be in their element as Fallout 4â€™s base building mode is essentially The Sims: Post-Apocalyptic Edition. Thereâ€™s a strong emphasis on forming communities throughout, and once settlements far and wide have been unified – which usually entails repelling nearby Raiders or felling Feral Ghouls – they can then be built and improved upon by adding power, food and water resources and bolstering defenses with turrets and traps. Itâ€™s a task as consuming as it is compulsive. Indeed, itâ€™s not hard to imagine that some players will spend more time painstakingly creating the perfect town rather than questing. Poor old Shaun will have to wait a while longer. 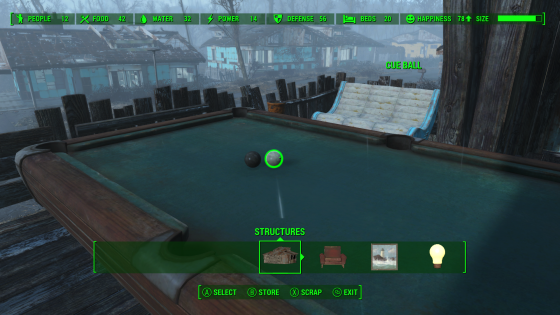 base building mode is essentially The Sims: Post-Apocalyptic Edition

Thereâ€™s hidden depth to crafting too, a la Minecraft, as itâ€™s possible to hook up electrical circuits with switches and whatnot. Over time settlements also become larger, requiring additional resources and more hands on deck to help with gardening or guard duties. These jobs can be assigned to your settlers as you see fit and they can also be kitted out with any unwanted weapons or pieces of armour. The potential is pretty staggering; itâ€™s entirely possible to create fully self-sustained shanty towns full of hardworking individuals. The requisite to gather resources also ensures that players keep a beady eye out for vital supplies while completing quests. We found ourselves returning to our shanty homestead after every successful mission to offload loot, a task that often lead to an hour of tinkering before hitting the wasteland once again. Incidentally, some missions – such as those that entail venturing into a vault or similar indoor environments – can take well over an hour to complete.

After crafting, the Power Armour suit is the next major new addition. Itâ€™s introduced shortly after meeting your first companion – loyal mutt Dogmeat, who can sniff out stashes of goodies – and it proves invaluable when under heavy firepower. Thereâ€™s no fall damage when using the suit either, allowing you to descend from cliff tops and rooftops without fear of breaking both legs. The suit cannot be relied on for lengthy periods though as it requires rare and valuable fusion cores, calling for it only to be used sparingly or when mood for (mini)gunning down enemies takes. Just donâ€™t be surprised when the suit runs out of juice mere meters away from your next objective, because – and trust us on this – thatâ€™ll definitely happen. 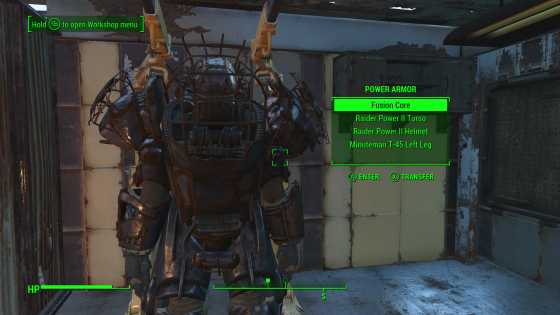 As mentioned in the opening paragraph, there is a sense of familiarity present. Rummage around desks, drawers, chests and such and youâ€™ll come across the usual pre-war clutter such as clipboards, coffee mugs, tattered clothing and empty Nuka Cola bottles. Even the lock picking mini-game (for want of a better description) is identical to before.

With many of the same perks making the jump, the perk chart too is pretty similar to that of Fallout 3 and New Vegas, including the mysterious stranger who randomly shows up during the gloriously grizzly slow-mo VAT sequences. Speaking of which, gunfights can be both tense and exciting and there has been a notable improvement on AI with human enemies now smarter when it comes to using cover. Ammo is scarce but not worryingly so, while different weapon types are more effective against some enemies than others. This gives good incentive to experiment with each and every weapon type found, even melee weapons like baseball bats and machetes.

Companion AI is still a little shaky, but itâ€™s clear that thought has gone into making each companion unique with some favoring melee combat over firepower. Their context sensitive remarks are a nice touch too, adding something to the overall atmosphere. From quietly stalking targets in mist-covered rural wastelands to walking through Bostonâ€™s city streets while the rain pours heavily, Fallout 4 rarely fails to leave a foreboding impression. 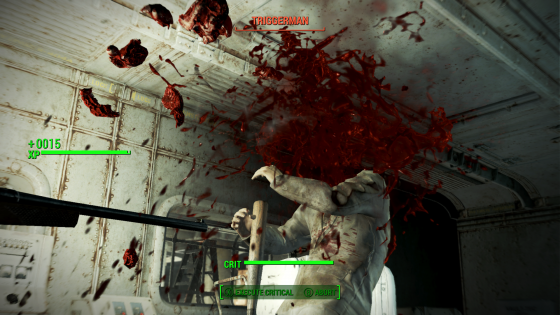 Again referencing the opening paragraph, itâ€™s newcomers thatâ€™ll have the hardest time here. A lot of its predecessorâ€™s faults and irritations are still present; some of which series veterans will have learnt to overcome. Weâ€™re talking about things like the save system, the random nature of combat and the occasional glitch. Forget to save often and youâ€™ll end up having to play through sizeable chunks all over again. Thereâ€™s nothing worse than spending ages de-cluttering the inventory, forgetting to save, and then being killed shortly after. Death does unfortunately come both swift and sudden at times – accidentally stroll into a minefield and you can kiss your limbs goodbye. Enemies that have a habit of zealously lobbing grenades can be a pain likewise. On the more positive side, weâ€™re pleased to report that we didnâ€™t come across quite as many glitches and bugs as expected. In over 30 hours of play we experienced one screen freeze, one glitch that caused us to fall through the floor and magically re-appear at a settlement miles away, and one panic inducing corrupted save file. Thankfully we had a â€˜quicksaveâ€™ to fall back on. And relax.

Itâ€™s perhaps a clichÃ© to say it, but these faults and glitches can be overlooked and forgiven given the scope and scale of the map, ergo the game itself. Fallout 4 is one colossal undertaking; a huge and almost wholly consistent adventure that makes hours fly by like mere minutes. The only thing that could possibly topple Fallout 4 is Fallout Online. Until such a thing exists, and weâ€™re hoping that one day it will, Fallout 4 comfortably ranks alongside The Witcher III, Batman: Arkham Knight and Metal Gear Solid V as one of this generationâ€™s finest.