Turning a kid’s cartoon license – even one as ideally suited as Adventure Time – into a point â€˜nâ€™ click adventure strikes us as risky business. From LucasArtâ€™s much loved classics to Telltaleâ€™s early efforts, itâ€™s a genre renowned for having a frustrating streak due to the linear nature. Overlook an item of importance or fail to ask an NPC a critical question and you’ll often have one colossal backtrack to endure.

Fortunately Finn & Jake Investigations‘ developer Vicious Cycle (EDF: Insect Armageddon, Eat Lead: The Return of Matt Hazard) has implemented a very subtle hint system to keep frustration levels low. Quite simply, every item that can be carried or interacted with has either a vocal or written description. Hints lie within these, and this is where the quality of writing excels – just enough information is given to point players in the right direction, or kick start a train of thought. Rarely is the solution handed on a plate and because of this the difficulty level is nigh on perfectly pitched. We also have no qualms in admitting that one sliding box puzzle had us flummoxed for longer than expected. 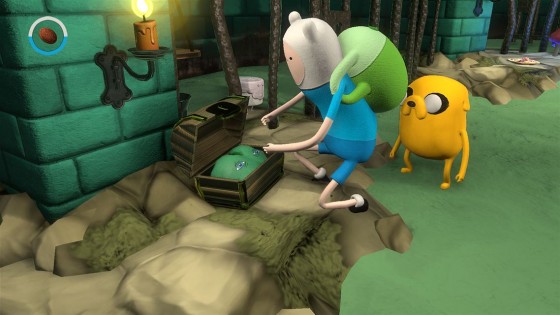 The set-up will be familiar to fans of Finn the human and his stretchy canine pal. The likeable duo come across an antique tickertape machine that provides reports of currently unsolved investigations. Five kingdom-trotting quests are on offer, presented in the form of short intertwined â€œgrayblesâ€ (a word that’ll be familiar to fans), with a common theme between them; a theme that isn’t revealed until the final mystery is done and dusted. The multi-floored tree house acts as a hub of sorts, and it’s here that the tutorial takes place.

the difficulty level is nigh on perfectly pitched

Finn is the only playable character, while Jake – who follows behind Finn like a lost puppy – can be called upon during instances where his stretchy powers are required, such as helping Finn reach higher up areas. Most items in the world of ‘Ooo’ can either be examined or interacted with, sometimes with humorous results. Thereâ€™s also an inventory to oversee and this is where a hidden depth lies, as often items have to be combined before they can serve purpose. A few items even have to be combined with multiple objects. A vocal prompt will notify if there’s a piece missing still, which is a thoughtful touch.

The opening investigation involves taking a trip to the Candy Kingdom to locate the whereabouts of missing candy citizens, resulting in a jaunt around the heavily guarded Wizard City. These two locations feature again in later investigations but not in a manner that seems lazy. Screen time is pretty much even for each recurring character, with the appearances of Flame Princess and Marceline saved for after the halfway mark. The final investigation meanwhile entails travelling to just about every renowned kingdom, persuading the likes of Lemongrab and the Ice King to help with a personal matter. Personal for Finn, that is. No investigation stands out as being poorer than the rest – the quality is consistent throughout, with lots of locations to rummage around and dozens of references from episodes old and new. 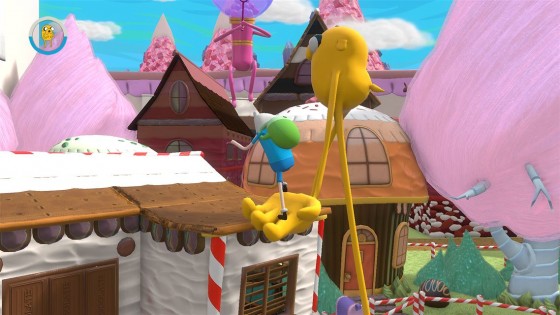 It’s evident throughout that Vicious Cycle are fans of the cartoon. No character is misrepresented in the slightest, and all vocal work is provided by the showâ€™s cast. Even Pendleton Ward himself reprises the role of the suitably stubborn diva Lumpy Space Princess. During one investigation LSP finds herself in charge of the Ice Kingdom, which proves to be a highlight. Setting up a series of pranks for the easily irritated Lemongrab is another. This is acceptable.

The only thing that grows wearisome over time is the combat. We can understand that combat was included to add a bit of variety and make the package more exciting than it may initially appear to some, but ultimately itâ€™s a redundant feature. Combat usually commences after crossing paths with a group of undesirables – guards from various kingdoms are the most common enemies – and has been kept purposely simple. Battles take place in small arenas against two or three waves of foes. Pull off a lengthy combo and one of four â€˜Jake attacksâ€™ can be used, including the infamous Jake Suit. At the end of each battle loot is awarded depending on performance. Loot serves no purpose other than adding a mild sense of progression though – stockpiles in the tree house simply become larger over time. Finn does however gain access to new swords as things progress, each with different powers. 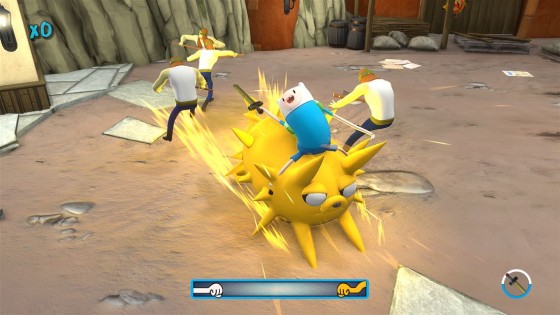 While Finn & Jake Investigations has clearly had more time (and presumably money) put into it than previous Adventure Time games, it can’t escape the one flaw every point ‘n’ click adventure seems to suffer from – severely limited replay value. Each investigation takes around an hour and a half, bringing the total runtime to 7-8 hours. When the ending credits rolled we were missing just two achievements – one for finding all hidden collectables (snails, obviously) and another for making 10 prank calls. Very few other achievements are missable and there are no sub-quests or similar.

This lack of replay value puts us in a quandary. Like the recent Transformers: Devastation this is a decent tie-in, the kind that sadly doesn’t come around often, but it’s hard to give it our glowing recommendation considering it’s almost full price. Achievements aside, we struggle to think of a single reason to return once finished.

Perhaps we should just be grateful that the franchises we love are finally being treated with respect. Long may this continue.