Presumably to avoid an unpleasant backlash, Activision has been pretty vocal about the last-gen versions of Call of Duty: Black Ops III missing the single-player campaign and other features. 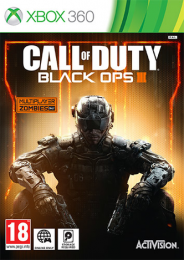 Understandably, not every gamer out there keeps tabs on the gaming news. To counterbalance this, it’s mentioned on the front of the case that the Xbox 360 and PS3 versions only feature multiplayer and zombies.

Itâ€™s also noted that an internet connection is required to play, while the description for the downloadable version makes it clear what to expect. To quote: “Call of Duty: Black Ops III Xbox 360 version does not include a co-op or single-player campaign game mode, and does not contain all game features present in the Xbox One version. Game performance varies by platform“.

Activision has also seen fit to throw in a download code for the original Black Ops as a means of compensation. As mentioned elsewhere, it has ended up being a counterproductive move – Black Ops III looks notably worse than the five year old original. Indeed, itâ€™s hardly a fitting swansong for the systems that propelled Call of Duty into gaming stardom. We wonâ€™t dispute the fact that itâ€™s a pretty shoddy conversion in the technical department.

It appears that there were issues with matchmaking during launch too, with some reports of three hours waits to finally get into a game.

Despite best efforts to inform that last-gen gamers arenâ€™t getting the full package though, Amazon customers have been left livid. Does nobody research what they’re buying? Evidently not. And of course, it’s all Activision’s fault.

The Xbox 360 version currently has a 1.5 star rating, formed of 49 reviews, while the PS3 iteration sits at 2 stars following 30 reviews. And yes, the Amazon product description does mention the lack of a campaign.

Here are a few choice, and unedited, reviews:

No campaign mode on the x360….. No one told me that otherwise would never of bought it !!! Rip off

No campaign it should say that in the title

A big waste of money, third attempt to write a review,
small print on Amazon states its only zombie and online for xbox 3, no campaign mode , can not log into the game despite hours of trying, feel like I’ve been conned.

Very unhappy. It’s not even the full game. I pre ordered this and did not know about the on line only options. No single player story mode. If you have no Internet you could only use the disc as a coffee mug stand. I have every single call of duty game for the xbox 360.the game developers have just upset a huge percentage of the xbox and Sony gameing community.

ABSOLUTELY FURIOUS. This game does not include the campaign mode, do not buy it. I can’t believe Amazon isn’t making this information more prominent, and I can’t believe that Call Of Duty has done this to me , I have half a dozen of their games. I feel like I’ve been assaulted and robbed.

Downloaded game onto xbox 360 paid Â£39 waited 4 hours for it to download……. and we’ve got half the game!!!! they cant play together so have to take it in turns what a waste of time and money, they so disappointed.

Why am I expected to pay Â£35 for half of a game? Why am I being ‘given’ a copy of OPS1? I’ve already got it, like a majority of the players who will buy this expecting the full game. Very disappointed, and feeling very short changed. Game will be going straight back, and I’ll wait until the price comes down. Which it will in a few weeks.

Don’t waste your money,no story mode, only multiplayer online and zombies online worst cod I have brought stick with other blacks ops

Bought this for my son and he has been so excited about getting the game on the day of release. So the 6th of November comes and so does the post and low and be hold COD BLACK OPS 3. My son was so over the moon then within a hour of getting this game he is sooo saaad as you can only play this game on line. What a load of Â£35 CRAP . It should be made more Cleary in bigger letters that it can only be played online. Not happy CUSTOMER.

I pre ordered this game not realising that the game did not include the solo player campaign. This to me is utterly useless as I have no interest in shooting zombies or the multi player aspects they offer. Highly disappointed as I am a long time fan of the franchise, I also find it shocking that we are being charged Â£35 for this load of dribble, this price to me is nigh on the price one would expect for the “full version” of a game. I feel that this fact should be made clearer by stating this in the main product title at the top of the screen, because placing it lower down in the product blurb to me is not enough. So am now having to return it, and will instead wait for the new Tomb Raider which is due out soon.

There is no Co-Op version in this game, you cannot play a single player game/campaign player mode. This is purely multiplayer and zombies and nothing else. Doesn’t make it that clear , be warned! The only way you can play the campaign is on a new gen game system

So much for EAâ€™s claims that gamers donâ€™t play single-player. We very much doubt that Star Wars: Battlefront will face a similar backlash though.