Arcade emulator MAME has been around for 18 years, so it stands to reason that the games supported in the latest updates are obscure to say the least. All the big arcade hitters were made compatible a long time ago. The latest release (version 0.167) supports arguably the obscurest system yet – a Sonic the Hedgehog branded popcorn maker.

SegaSonic Popcorn Shop was first released in Japanese arcades during 1993. Polygon reports that it never reached the western world, but this appears to be incorrect – users on this MAME site claim to have seen the quirky cab in British seaside arcades. 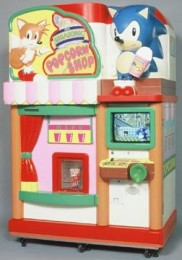 While popcorn was being made an incredibly basic mini-game could be played, lasting just a couple of minutes. Itâ€™s a game in the loosest sense of the word – thereâ€™s no â€˜winâ€™ or â€˜loseâ€™. A bag of fresh popcorn (available in salted, butter or curry flavour) was dished up regardless of how well players performed.

Sonic is controlled by a hand crank, which MAME is understandably unable to emulate. As such itâ€™s the code thatâ€™s emulated here, rather than the â€œgameâ€ itself. The idea was to turn the crank quickly to help Sonic escape Robotnikâ€™s clutches before helping Tails remove unpopped kernels. Note Tails fanning the fire to keep it ablaze. A nice little touch.

Powered by SEGAâ€™s C2 board – which had a similar architecture to the Mega Drive – it sports some nice chunky visuals. Sonic is surprising vocal, too:

We have ShouTime, the Dumping Union and a handful of donators to thank for persevering the obscurest of all Sonic games. Purchasing the arcade cabinetâ€™s motherboard and dumping the ROM was a collective effort. We reckon it was worth it just to preserve Robotnikâ€™s rather flamboyant walking cycle for future generations.

MAME fans are hopeful that SEGAâ€™s similar Anpanman and Mickey Mouse/Donald Duck popcorn makers will one day be â€˜dumpedâ€™ online.