If SkyScrappers was a retro game it would be a SEGA Saturn oddity. The kind that was briefly mentioned in easily excitable â€˜90s gaming magazines, and then never heard of again until eBay sparked an import gaming resurgence. Indeed, it wasnâ€™t until 1999/2000 that it became apparent that the Saturn had far more hidden gems than even the hardiest of SEGA fans realised. SkyScrappers would be one of those games.

SkyScrappers originates from Bristol, however. Developer Ground Shatter has merely imitated the look and feel of a late â€˜90s arcade game, and with an acute eye for detail too. It genuinely resembles an eastern effort, from the anime-style character design to the fittingly jaunty music. We canâ€™t ignore the announcer on the title screen either, pronouncing the gameâ€™s name in the proudest of fashions.

Itâ€™s a 2D brawler with a twist. Two, actually. The screen scrolls vertically rather than horizontally, with battles taking place in front of one of four crumbling tower blocks. Thatâ€™s the first twist. Debris falls from the sky; smaller objects can be knocked into the opposition with a well-timed hit while larger objects such as beams and floorboards can be used as makeshift platforms. Matches can be won in two different ways – either by knocking out all opposition with an array of melee attacks, sliding manoeuvres and ground slams or by being the first to reach the roof. Thatâ€™s the second twist. 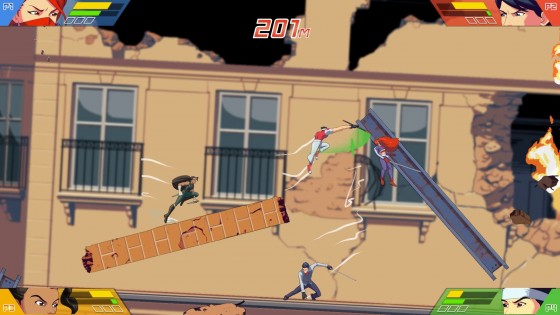 The idea is to force the opposition off the screen by leaping and double-jumping off platforms in quick secession. Ingeniously, many platforms have a fixed axis – as soon as landing on one itâ€™ll start to spin, making it tricky for anybody nearby to also use. Leaping off a platform while itâ€™s at its highest point also results in a small boost. Itâ€™s not enough to induce a risk/reward system, but it does often give floundering players an advantage by propelling them up to new levels.

All characters are equally nimble regardless though. They also share the same two-button move set which appears to be down to balancing rather than laziness. This does however rob the characters – two male, two female – of some personality, leaving only the static pre-match cut-scenes to make an impression.

In true arcade fashion, the single-player mode only takes around 20 minutes to finish and each character has their own pleasingly daft ending. Set across 7 stages, matches start out as 1 vs. 1 battles that can be won with minimal effort, leading on to battles against three AI opponents. The first to three matches wins. As such, the final battle can go on for a good half-a-dozen matches until a winner is declared. 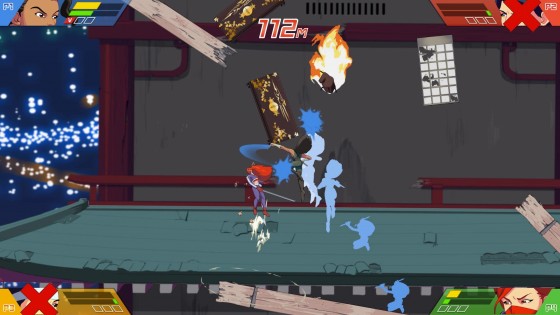 AI is generally robust. Attack another character and theyâ€™ll quickly retaliate; use a chain of melee attacks and theyâ€™ll knock you back with a ground slam. Start making your way up a building with haste and theyâ€™ll follow suit. Weâ€™ve even experienced battles that entirely took place at the rubble at the bottom of the building. It can only be good news, then, that AI can be called in to fill gaps during multiplayer.

each character has their own pleasingly daft ending

Sadly, SkyScrappers falls foul to the same problem many Saturn (and Dreamcast) arcade conversions faced – itâ€™s way too light on content. Even more so considering the Â£17.99 price tag, which in our eyes puts it in the premium price bracket. Itâ€™s possible to finish the single-player mode with all four characters in less than two hours, and once beaten thereâ€™s no reason whatsoever to return. No leaderboards, unlockable extras or anything of the sort.

This leaves just the multiplayer mode, which is arguably SkyScrappersâ€™ forte, favouring good old couch gaming rather than online play. With a friend (or three) by your side SkyScrappers proves to be another highly entertaining PSN party game, with most battles ending closely due to the tight balancing. If youâ€™re after a new multiplayer game to add to your roster alongside the likes of Rocket League and Towerfall then SkyScrappers is recommended, providing you can justify the price. Perhaps have a whip-round amongst friends first. Or resort to buying store brand fizzy pop for the next few gaming sessions.

Update: Ground Shatter informs us SCEE has dropped permanently the price to Â£11.99 as of today (16th November). Best get scrapping, then